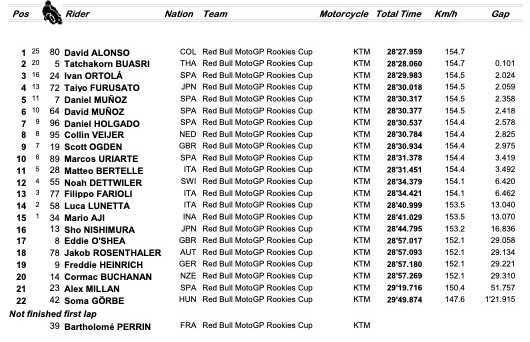 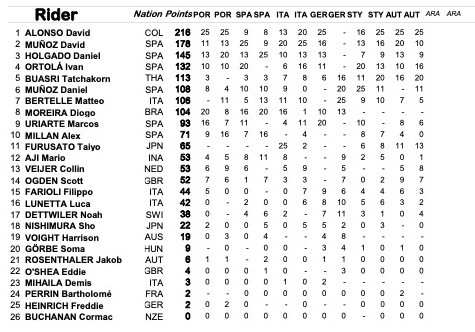 Three brilliant race wins in a row for David Alonso gives the Colombian 15-year-old a strong claim to the 2021 Red Bull MotoGP Rookies Cup. Right on his tail all the way to the Spielberg finish line was Tatchakorn Buasri, the 20-year-old Thai, with Spanish 17-year-old Ivan Ortolá leading the chasing pack.

It was a fabulous 13 KTM lead battle for most of the race and Alonso could not break away as he had done in the Austrian GP Race 1 on Saturday. Arch rival David Muñoz was particularly determined to hold on but then so nearly crashed and his big save gave Alonso and Buasri breathing room.

David Muñoz, the 15-year-old Spaniard, finally crossed the line 6th and is now 38 points adrift with two races and 50 points still to be claimed at Motorland Aragon.

“It was a great weekend since Free Practice, yesterday a good race. Today we know that it was going to be hard but well, from the first lap I was in the group and then I tried to push, but it was not possible.”

“I was happy with my pace but the other riders were competitive in this race and I had some more laps in the group, fighting. Some riders were on the limit, a bit aggressive but I managed well.”

“Then I had another opportunity, and I pushed harder. Finally I could do it and only Tatchakorn Buasri was behind me.”

“That was perfect because in 4 races here we win 3, it is incredible for the championship, for my confidence. Most important is that each lap I do with this bike I enjoy a lot, I have a super, super good feeling and I am ready for Aragon.”

Tatchakorn Buasri on his tail

“The Red Bull Ring is a second home for me. I am so happy with the race today, it was a little bit difficult because I made a mistake in turn one in the beginning of the race and went back to position 9. Then I was pushing, pushing, passing, passing, then I could follow Alonso.”

“On the last lap I wanted to overtake but you know, he is very fast. Still, today I am so happy. I will keep trying to win, to concentrate, more training, keep trying.”

Iván Ortolá on the podium

“This weekend was amazing, in the first race I suffered a lot in the group, I pushed a lot.”

“This podium for me, it tastes like a victory, because of yesterday’s race. Thanks to everyone who supports me.”

David Muñoz on the limit

“The race today was very fast, for me with the bike it was difficult. A big moment near the end, it was almost a disaster, right on the limit.”