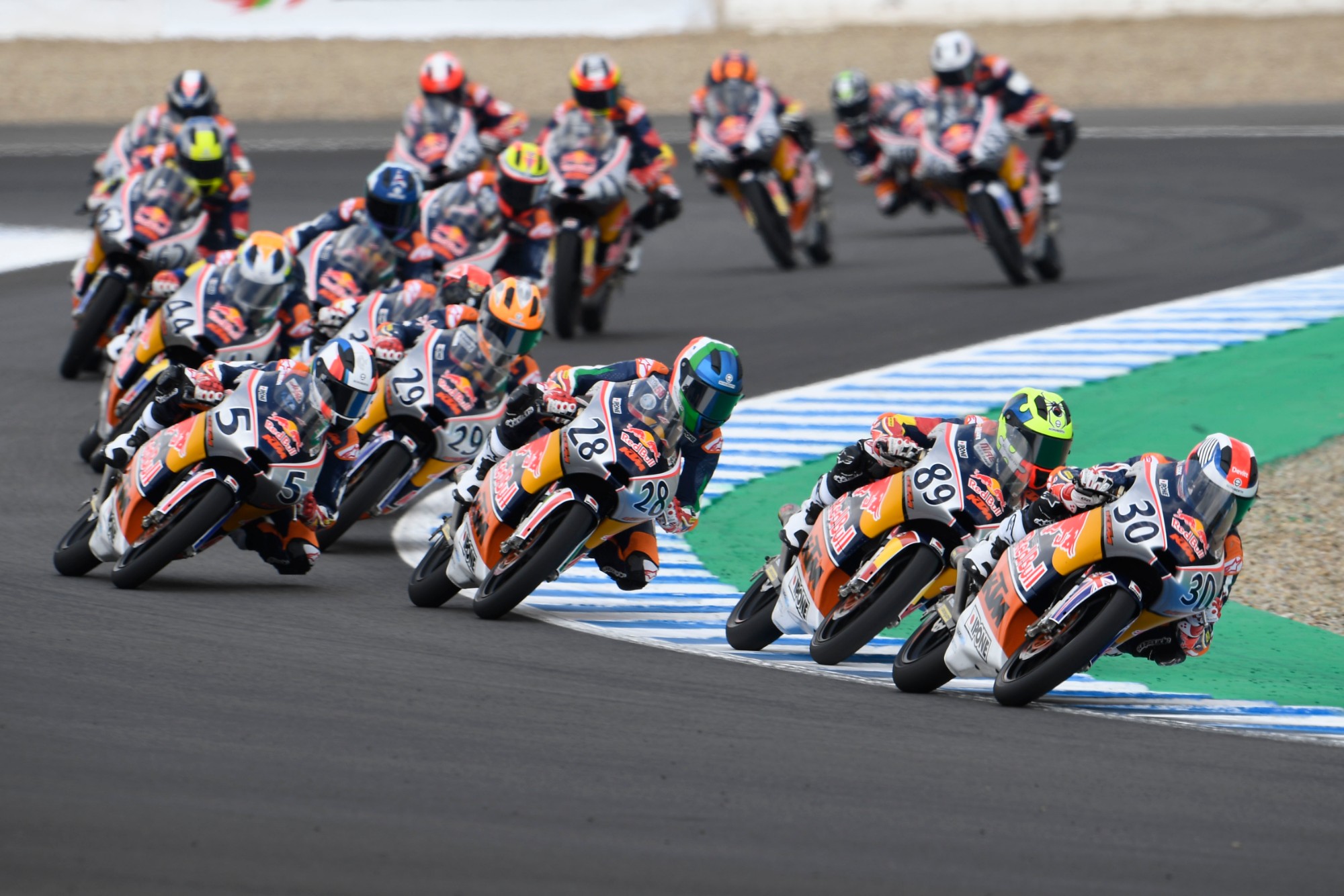 Race One Results (all on KTM 250s with Dunlop tires):

It came down to a blistering last lap between Yuki Kunii, Carlos Tatay and Barry Baltus to decide the first Red Bull MotoGP Rookies Cup race of 2019. From pole position, Kunii, the 16-year-old Japanese, got embroiled in a seven man battle for the lead but put in the perfect last lap to win.

Pressuring all the way to the flag, Spanish 15-year-old Tatay just got the better of Belgian 15-year-old Baltus. Though the race was clearly between the trio for the last three laps, David Salvador, the Spanish 15-year-old having his first outing on the Rookies Cup KTM RC 250 R had been a big threat for most of the 16 laps.

Those four only got away after the early seven-way battle split at about half distance leaving Lorenzo Fellon, Haruki Noguchi and Jason Dupasquier with their own thrilling battle to the flag.

Kunii won in Mugello last season before suffering an injury in a non Rookies Cup race that wrecked his mid season but after an excellent preseason test and an almost perfect practice and qualifying on Friday he was full of confidence. “Honestly the race was a bit harder than I expected,” explained Kunii frankly. “The other riders made a good start and it was a big group in the first laps, everyone pushing very hard.”

“In the middle of the race I realised that I had a good pace and that the group was not keeping up. Still Tatay was riding very hard and was pushing very hard all the way. I’m happy, its a great way to start the season and the bike was great, no need to change anything tomorrow, just push a little harder,” concluded Kunii.

“That’s OK,” said Tatay who took the same position in Race 1 last year. “I am happy to finish and take second, it was a very tough fight all the way. There was a lot of overtaking every lap, Yuki was a little stronger than me today. My bike was good, I won’t change anything, I just will change myself,” grinned Tatay who won on Sunday 12 months ago.

“Right at the end I took the wrong gear,” explained Baltus. “I went inside to pass Tatay and go after Kunii, I took 3rd but I was on a tight line, Tatay had 2nd and got away from me on acceleration.”

“Still it was a good race, good to be fighting at the front. I couldn’t get away on my own, I knew I had to stay in second or third and make the effort on the last lap but I made a mistake going onto the last lap and had to push very hard to catch them. I managed and I went for it but the wrong gear cost me. The bike is good though, no need to change anything, just push harder,” added Baltus.

Salvador is looking for an improvement for Sunday after lapping quicker than he did in Qualifying. “Yes hopefully we can improve the setting a bit. I was right on the limit when I tried to battle with the leading three at the end. It was still a good race though, good to take fourth and I hope we can do even better tomorrow.”

Fellon, the 14-year-old Frenchman was frankly surprised with fifth. “I honestly didn’t expect to be at the front. I enjoyed the race, I hope we can improve the setting a bit for tomorrow as I was running out of rear grip in the last five laps but I am happy with that and learnt a lot.”

“I wanted a calm race and to finish,” explained Noguchi, the 17-year-old Japanese. “I finished and gained a lot of experience, we may change the bike a little for tomorrow but not much. I will push a bit harder.”