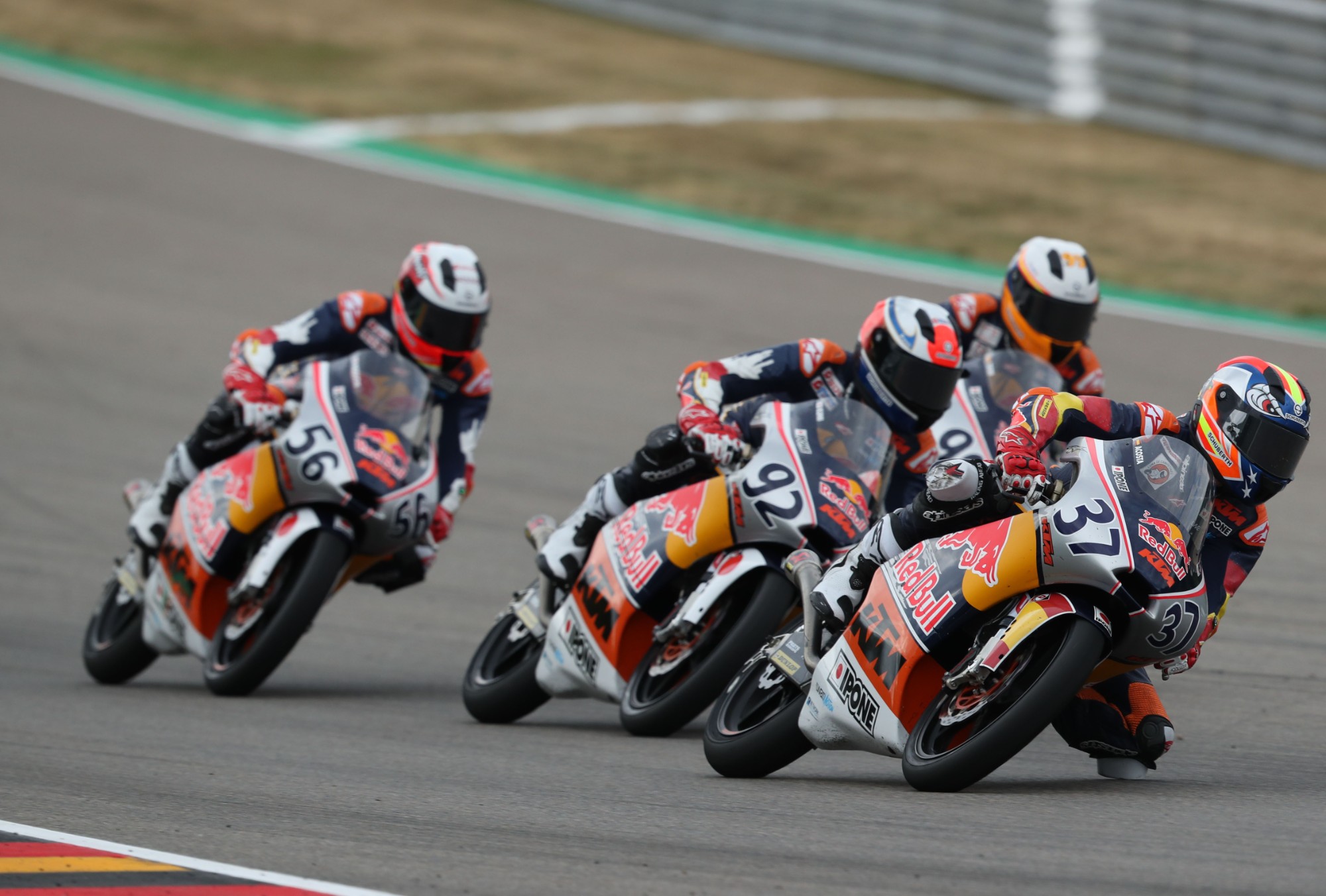 Race One Results (all on KTM 250s with Dunlop tires):

Pedro Acosta won Race 1 at the Sachsenring when it was red flagged due to an accident. The 15-year-old Spaniard was part of a large front group in a thrilling battle with the KTM RC 250 Rs swapping places at every turn in typical Red Bull MotoGP Rookies Cup style. Any one of eight might have taken the win.

Second at the end of fourteen of the nineteen laps was Yuki Kunii, the 16-year-old Japanese continuing his excellent recovery from injury while points leader, 16-year-old Spaniard Carlos Tatay, was third.

The way the cards fell

It was a huge anticlimax but there was reason to take any of the credit away from Acosta who had come from tenth on the grid. “In the qualifying yesterday I crashed and did not get a good lap time,” explained Acosta. “Just tenth on the grid. But today I started very well and then took it a little easy as I didn’t want to make the same mistake as I did in Assen.”

“In the middle of the race when I felt I had good grip I could pass all my mates but then had a slide. I realised that it was better to follow a little and wait for the end of the race to see what would happen but then the red flag came out and I was the winner.”

“I am very happy to have won my first Rookies race as a few races ago I seemed stuck with second. I have a good setting with the bike so I will push hard tomorrow, I think I can win again but we’ll see. Thanks so much to my helper Paco and to all the staff and those around me.”

The way back to the front

Kunii had done more of the front running but was not too upset as he was no longer too restricted by his injured right wrist. “My wrist was OK in the race but it is now, after the race that it really hurts. The bike was great and I was really enjoying the race. I had confidence from being on pole yesterday and I had a plan for the end of the race, I just never got the chance to try it. My wrist is better and better all the time so I am looking forward to Race 2.”

“It’s not Christmas every day,” said Tatay with a grin in the winners enclosure. “I am happy with everything though, the bike was great and I had some idea of how to manage the end of the race, the tyres seemed to be lasting well and I will not change anything for tomorrow. It will be good to see what happens with full race distance.”

First of the unhappy riders was 18-year-old Japanese Haruki Noguchi who was awarded fourth. “The result was very disappointing. The race was good, I certainly could fight in the front group and as I could not get away I planned to wait until the last five laps to really push. Then the red flag came out before I got the chance. .I think we can improve the bike a bit for tomorrow, I am looking for more rear grip so I will talk to the technical staff about that.”

In the shuffle, Lorenzo Fellon, the 14-year-old Frenchman was fifth. “I had a good start and the early laps were good so that I could get into the lead battle. Lots of overtaking. I have to thank Santi (Suspension Engineer Santiago Morralla) because he made some changes to the bike that made it a lot more stable through the corners and gave me more confidence. I have to apologise to David (Salvador) because I bumped into him, of course I didn’t mean to but it happens, I certainly apologise to him.”

“That was hard,” stated David Salvador, the 15-year old Spaniard who started the race second in the points table but fell mid distance from the lead pack. “I just came out of the right hander at the bottom of the hill and as we went up into the next left my front wheel was knocked away, nothing I could do.”

Like Noguchi, Billy van Eerde, the 17-year-old Australian had had a good run in the lead and ended up with sixth. “It’s a shame it ended like that I felt good all race, the bike was working well and it was good fun battling at the front. I probably relaxed a bit too much and then I had just started to push again when the red flag came out and ended it but at least we know that the bike is working well and we can try and do it again tomorrow.”

The race was red flagged because Nicolás Hernández fell. While the 16-year-old Colombian was initially immobile, he escaped serious injury. He remains in hospital overnight for observation.