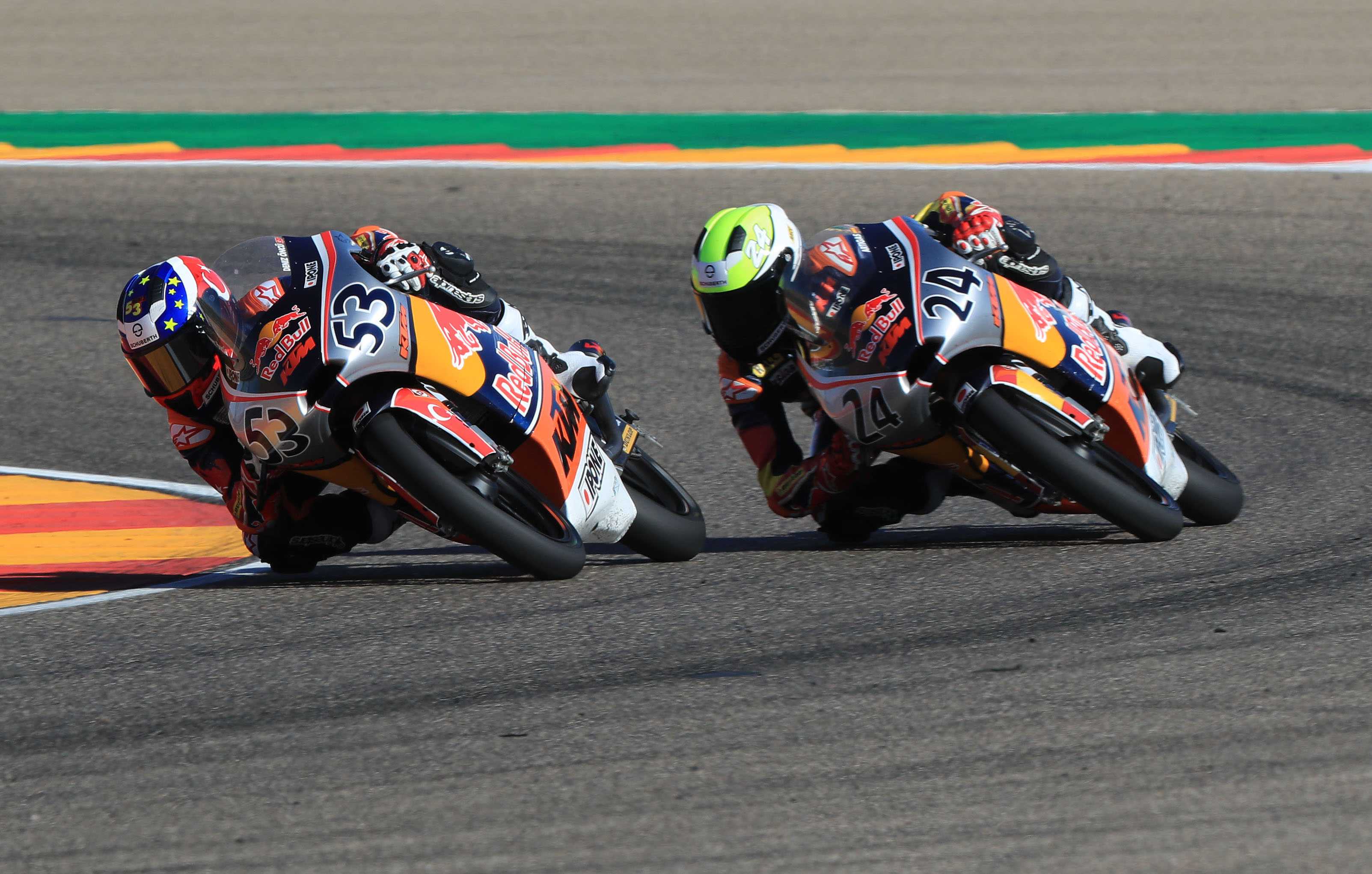 Race One Results (all on KTM RCR250s and Dunlop tires):

Championship Point Standings (after 11 of 12 races):

Deniz Öncü first and looking for second in Aragon 1

Deniz Öncü won his second race of the year and has one hand firmly on second place in the Red Bull MotoGP Rookies Cup after a thrilling penultimate race of the 2018 season. Motorland Aragón proved the perfect venue for the 15-year-old Turk to display his talent and racecraft as he flashed across the line just ahead of local hero Xavi Artigas.

Czech 16-year-old Filip Salac? had started the race tied on points with Deniz Öncü and seven ahead of 15-year-old Artigas as they all sat on the front row. Cruelly Salac? was brought down when Meikon Kawakami crashed in front of him taking them both out of the intense lead battle that featured ten riders for much of the 15 laps.

It was another fabulous KTM RC 250 R contest with a whole string of different leaders including 15-year-old Spaniard Carlos Tatay who would eventually finish third. No one could get clean away until the last three laps. One of the few stars not in that lead battle was Cup winner Can Öncü who languished in tenth, where he qualified.

“It was a shame not to have him with me on the podium,” said Deniz, “But I am incredibly happy with the win. It was a very hard race, it was hot and I was thirsty. I was fighting at the front all the way but it was impossible to break away. I decided to play it cool until five or six laps to go and then pushed.”

“Artigas was in front by a second or two and I went after him. We got away from the other riders and I passed him. Then I just concentrated on really making a perfect last lap so he couldn’t get me. It was a great race, the bike was fantastic and such a close battle, you can see the marks on my leathers,” grinned Deniz showing the scuffs on the upper left leg of his Alpinestars.

“I’m happy with that,” claimed Artigas. “Yes I really am. Happy to be second at my home race and it was a great race. It was very hot, the bike was sliding a lot but I was able to battle. Then I had a strange problem with the front brake being unpredictable, it was good then not, then it was good again. That is where I lost the edge and couldn’t challenge Denis at the last few corners.”

“Still there is another race tomorrow and another chance to win,” he concluded, now standing 12 points behind Deniz Öncü in the race for second in the Cup and 13 ahead of Salac? with 25 on offer from Sunday’s final race.

Tatay was back on the podium where he started the season, with second and first in Jerez. “Yes it’s great to be back,” he said with the biggest smile since early May. “It was a super hard race, fighting all the way, swapping places every corner, so many riders. I kept cool and just pushed at the end. Xavi and Deniz had got way, there was nothing we could do about that but I wanted third.”

“I knew I should not lead onto the back straight on the last lap and I put myself in the right position for the slipstream,” explained Tatay. “It was still hard at the end of the straight, I was waiting, waiting to brake, was in so deep but managed to turn and get through. Such a good feeling to be third and I hope for another great race tomorrow.”

Happy Colombian 18-year-old Steward Garcia was fourth. “Wow that was an exciting race, fighting, fighting. So many guys together. I didn’t qualify well, just 13th but I pushed hard and got through to the front. Fourth is good, but I so want to be on the podium in my last Rookies race tomorrow. I will be on the podium tomorrow,” asserted the sweaty teen.

Unhappy Czech Salac? was nursing a red graze on his right hip. “It’s a bit sore but it wasn’t what stopped me getting back on the bike, I tried but the handlebar was broken. I didn’t make a good start but I got up to the front. The bike was good and I was in a position to at least get a podium until another rider passed me and immediately crashed right in front of me.”

Can Öncü wasn’t as down, after all he already has the Cup, but he didn’t think much of tenth. “I got onto the back straight on the first lap in the position to pick up the slipstream but the bike just didn’t have it. I don’t know, the guys had swapped bikes for me in qualifying but it wasn’t working. Sure I am not feeling 100%, I’m a bit sick but that isn’t all of it. I hope everything can be better in Race 2. It was great to see my brother win and I want him to have another great race tomorrow.”