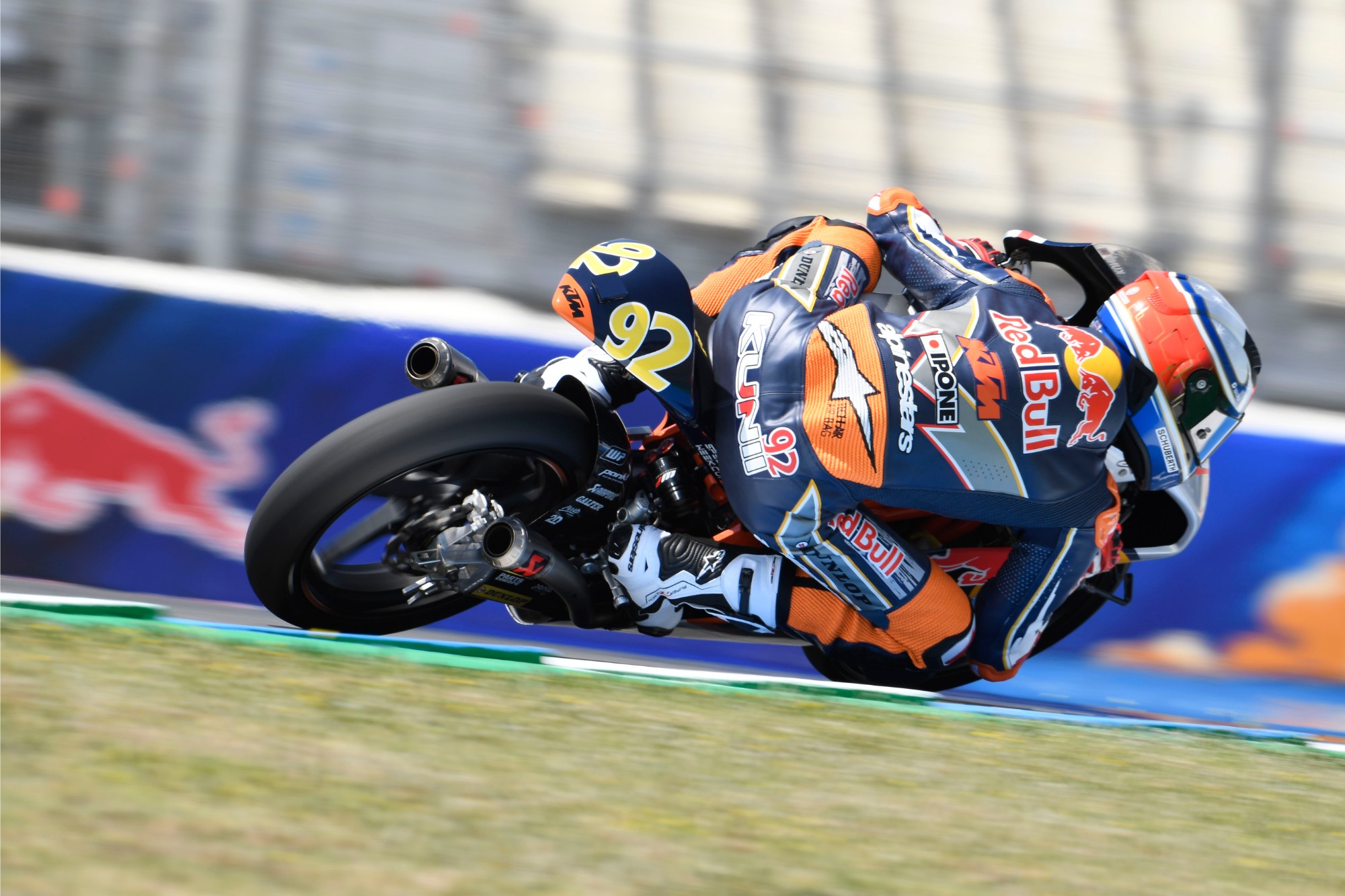 Qualifying Results (all on KTM 250s with Dunlop tires):

Close battle for Qualifying in Jerez

A fascinating mix of favourites and newcomers will sit on the front rows of the grid on Saturday and Sunday after an intense first qualifying session of the Red Bull MotoGP Rookies Cup season.

Yuki Kunii took the Jerez pole but the 16-year-old Japanese knows very well that Barry Baltus might have pushed him harder but the Belgian 15-year-old had to swap a spare bike due to a technical issue after being quickest in Free Practice 1. Kunii headed FP2.

Completing the front row is Spanish 15-year-old Carlos Tatay who scored a win and a second here twelve months ago on the KTM RC 250 R.

“I’m very happy with that,” enthused Kunii. “It has all come together perfectly. I had a good test here and then I won in the CEV last weekend so my confidence in the bike and myself is high. We had a good practice and I felt very good on the bike for qualifying.”

Naturally Baltus was less thrilled. “It’s a shame, I had technical problems with the bike in FP2 and after a couple of laps of qualifying. I was given a spare bike and put in the laps but it wasn’t set up for me so I couldn’t challenge for pole. Still I have a good setting for my bike and I am sure they will fix that overnight.”

Tatay is pretty much exactly where he wants to be. “Yes it all went very well today, we worked on the bike and I worked on myself so now I am very happy. I wasn’t 100% myself mentally after the test, I gave it a lot of thought, analysed what I was doing and where I could improve and I think I have put that together today.”

Haruki Noguchi heads up row two and the seventeen-year-old Japanese is content with that for his first Rookies weekend. “Yes I needed to do a good job today. I was not happy with my CEV weekend in Valencia, I crashed twice and really was not in control of the situation. In Race 2 I was determined to be more controlled and to finish, I managed that. This is my first Rookies Cup event so I wanted to keep going like that and I have. I want to carry on in the race.”

Great to be back

Making a very impressive return to racing after missing almost the entire 2018 season, Jason Dupasquier, the 17-year-old Swiss, completes row two. “Yes it’s great to be here and be competitive, I felt good on the bike. The recovery has been a long hard road but now I feel very good, confident on the bike and we have a good setting. I slid off at the end of qualifying, I think I braked too hard but no damage done.”

For those who want to join the 2020 Red Bull MotoGP Rookies Cup, applications are now open https://rookiescup.redbull.com/join-us – take the first step to becoming a World Champion.