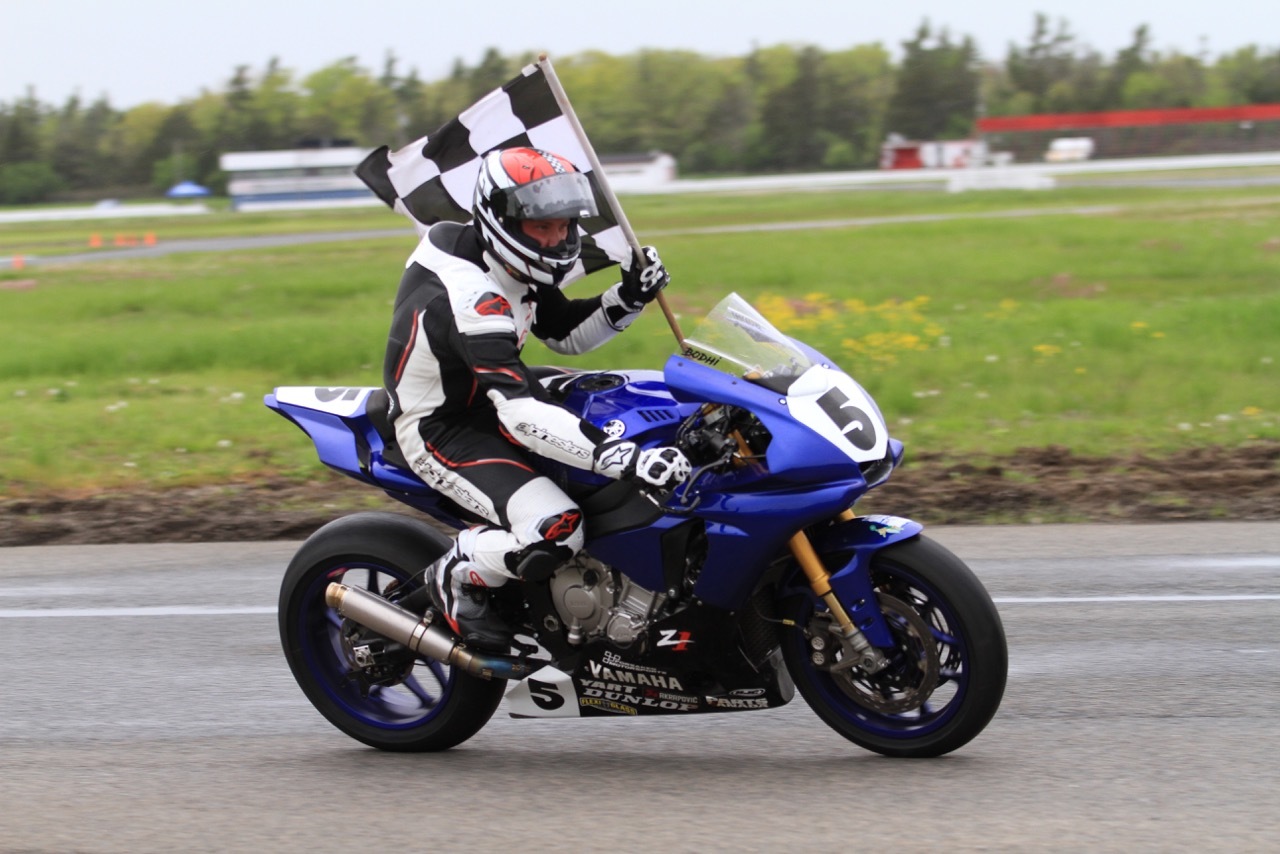 When torrential rains and flooding caused a cancellation of the R.A.C.E. SuperSeries Round 1 at Shannonville Motorsport Park, hopes were high for a better start to the season this past weekend. Saturday’s cool but clear skies were promising, but by the time Sunday’s finals rolled around, rain looked to create havoc once again.

Just when it looked like the Pro Superbike final was in jeopardy, the rain stopped and Shannonville race fans were treated to a barn-burner of a final contest.

As the start flag dropped, Shannonville regular Andrew Nelson threw his new Suzuki GSX-R1000 into the early lead. Behind him, Warman Saskatchewan’s Bodhi Edie took off in hot pursuit aboard his Yamaha R1M. In a lonely third was Kingston’s “Jammin” Jeff Williams. A three way battle ensued for fourth between last years champions Michael Leon, Elie Daccache and a hard riding Tim Toldness. Nelson looked to run away from the pack, enjoying a large lead, but as the lap counter worked it’s way forward, Edie closed the gap. With only a few laps remaining in the contest, Edie caught and passed Nelson who briefly retook the lead only to lose it again to eventual race winner Bodhi Edie. Williams took his BMW S1000RR to the final step of the podium, while Daccache fought on, first dispatching Toldness and then finally Leon to take fourth. As rain once again started to soak the track, 2016 Superbike champion Michael Leon made a smart decision, saving his Royal Distributing BMW S1000RR for the all important Mopar CSBK National race next weekend at Shannonville, opting for a well earned fifth.

In Pro 600 action, Peterborough’s Tomas Casas took his first Pro win in a rain soaked event. Belleville’s Mike Raniowski shot off to an early lead, but a miscue coming out of the hairpin ended his contest. Kingston’s Chris Fehr, in his first Pro season rode well to finish in second while reigning champion Elie Daccache inherited the final step of the podium after Elliot Viera had an off-track excursion, ending his challenge.

JF Aubin got a blistering start in the Amateur Superbike race, setting the fastest lap right off the start line. The effort was enough to put him well ahead for the race win. In second was Samuel Demarais with third going to Danny Cayer.

In Amateur 600 action, Samuel Demarais earned his way to the top of the podium just ahead of Sean Latta and JF Aubin. Local racer Leo Foley looked to be in podium contention until a last lap back-marker split the final three riders, forcing Foley wide and into fourth. Cameron Walker rode to a fifth place finish.

Racing resumes again next weekend, May 26th to 28th as Shannonville Motorsport Park hosts Round 1 of the Mopar CSBK National Superbike races, with support from the Military Family Resource Center. All first-responders will receive admission to the event at half-price.