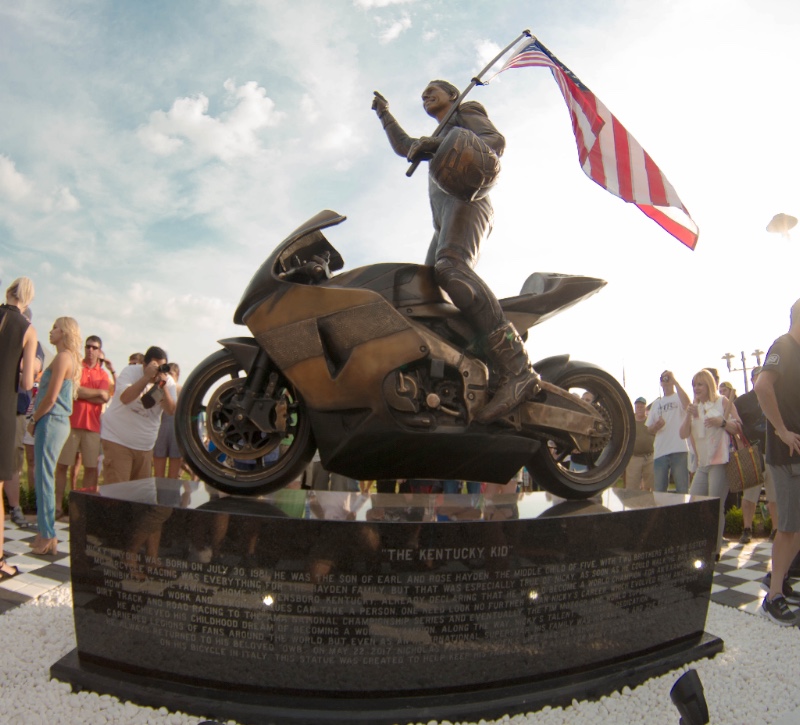 OWENSBORO, Kentucky. (June 8, 2018) — This evening in a special ceremony, the City of Owensboro revealed a statue celebrating the life and accomplishments of the late motorcycle road racing champion Nicky Hayden, who was born and raised in the city. Held on the front lawn of the Owensboro Convention Center, the ceremony was a part of a regular summer event called Friday After 5. Attended by locals and Nicky Hayden fans from as far away as the U.K., the ceremony included a speech by Mayor Tom Watson, who proclaimed tomorrow Nicky Hayden Day, the date June 9 referencing Nicky’s racing number, 69.

“We were proud to unveil the statue today honoring Nicky,” Mayor Watson said. “He was not only a world-class motorcycle champion, he was a world-class person, and we are proud that he called Owensboro home. We know his legacy will live on forever.”

Commissioned by the city and the Hayden family (Nicky’s parents, siblings, and fiancée, as well as members of his extended family), the bronze sculpture was created by Loveland, Colorado’s George Lundeen, who was in attendance with the Haydens.

“This event and this sculpture mean a great deal to our family,” said Nicky’s older brother, Tommy. “In the year since his death, we’ve been blown away by the outpouring of support from locals and people all over the world. A number of Nicky’s fans have told me that they would like to have a destination where they can pay their respects to their hero, and this statue will serve that purpose. In addition, I hope it will serve as a tangible reminder to Owensboro citizens that it’s possible to achieve great things while remaining true to your community, just like Nicky did.”

ABOUT THE HAYDEN FAMILY

The family of late 2006 MotoGP World Champion Nicky Hayden continues to reside in Owensboro, Kentucky. In his memory, they have set up the Nicky Hayden Memorial Fund, which helps local children in the community he loved so much. Hayden merchandise and memorabilia may be purchased at the Hayden Brothers General Store.