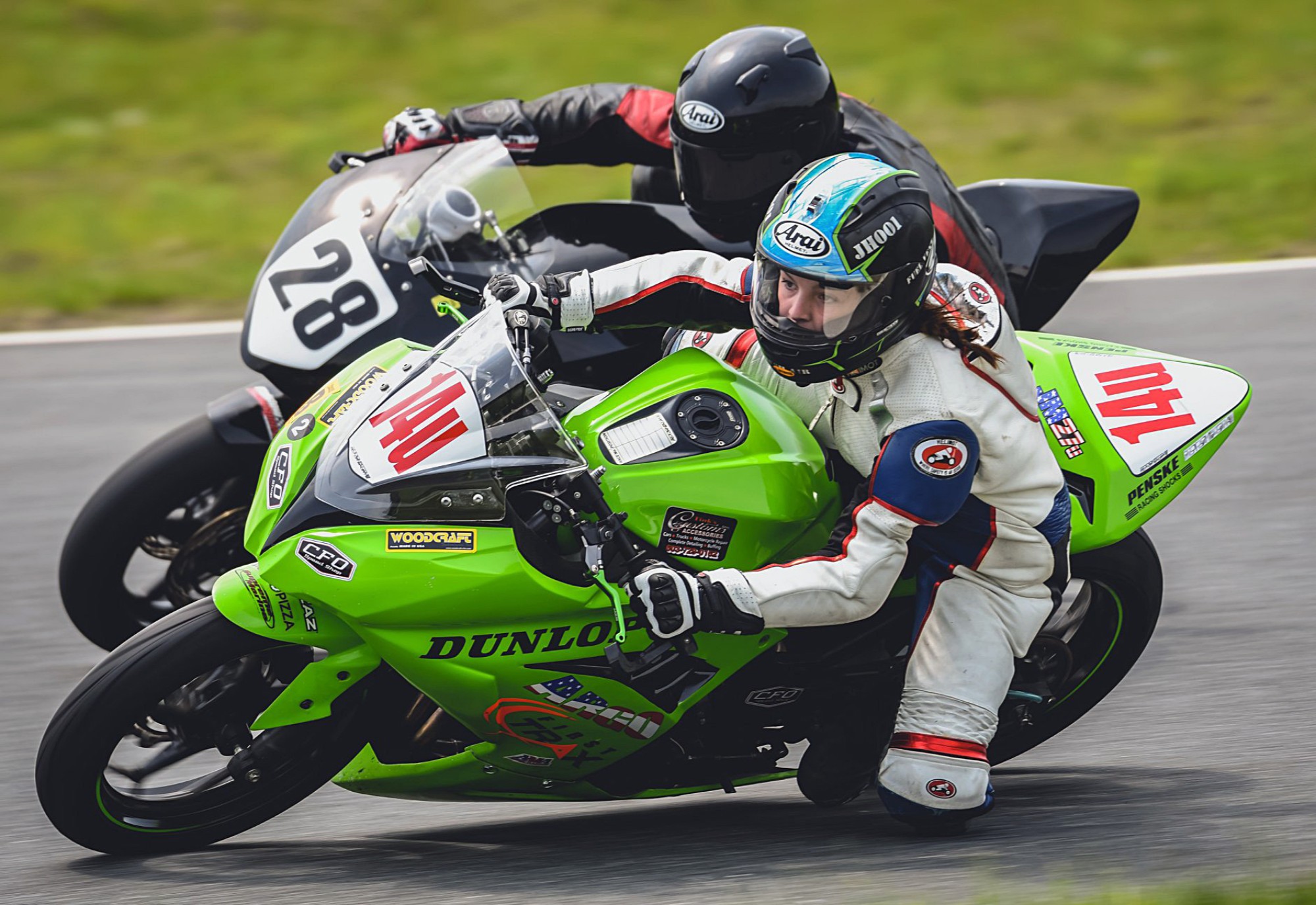 The opening weekend for the 2019 NESBC season had forecasted rain, but the weather turned out to be perfect and resulted in some incredible racing action. All of the series sponsors returned for 2019 and the entire crew is grateful for the involvement of the Brattleboro Auto Mall, FirstTrax, Kawasaki, Arai, Bazzaz, Hindle and Dunlop. The Penguin Racing School hosts these events to help develop young aspiring racers and to give track day riders an opportunity to experience the fun and camaraderie of competition. The staff and crew was excited to see seven riders under the age of 16 at this event!

Racing started with the FirstTrax Motard class and perennial front runner Adam Clark stormed out to an early lead. However, by the end of lap one 2018 Champion Bill Morey and talented 16-year-old Elijah Block pushed their way to the front. By the halfway point Morey has closed the gap on his young opponent down to only a couple bike lengths, but Block laid down his fastest laps just after the halfway point and gave himself a cushion. Morey and Clark maintained their podium spots to the end, while a hard charging Sergio Dimofetta was able to hold off David Gelerter to round out the final two purse-paying positions.

Next up was the combined Arai Intermediate A and Bazzaz Intermediate B classes. The Intermediate A riders left first and Fletcher Rood bolted off the line on his Triumph Street Triple, followed by the Yamaha R6 of Christian Trudeau and the Kawasaki ZX-6R of Paul Sullivan. The front two riders separated themselves from the pack and at the halfway point Trudeau drafted by Rood on the straight and began pulling away. Meanwhile, Sullivan was recovering from a slow start and closing hard on Rood. In the end, Sullivan came up just short and Rood hung on for the 2nd place start. Meanwhile, the Intermediate B class was led by a hard charging Thomas Sands and his KTM 390. However, behind him NESBC veteran Miles Allen was stalking him on his Husquvarna 450. Behind the lead battle, Paul Sadatis was recovering from a last place start on his Kawasaki Ninja 250 and pushing through the field. The last lap had lots of action with Allen roaring around the outside of Sands in the tricky downhill turn three, and Sadatis making his move past Sal Finochiaro to secure the final podium spot.

The Hindle Street Bike 1 featured a large grid with a new face at the front. James Ellis and his big R1 got a the holeshot, followed closely by the Kawasaki ZX6 of James Muccio. As the two leaders stretched away and separated, a huge battle was brewing behind them, led by the Suzuki of Fred Gagne, the Yamaha of Clayton Davenport and the Kawasaki of Tyler Raymond. The battle for third was ever separated by more than a few bike lengths until the last two laps when Raymond put his head down and laid down his best times of the race. Ellis finished the race in style with a big wheelie across start finish, but had to pay penance during the trophy presentation (to the order of 10 pushups) for a minor infraction on the white flag lap. All was well at Canaan in the end.

The Dunlop Street bike 2 class was the largest of the event with 6 rows of riders lining up to take the green flag. Nathan Muscaro sped off to a quick lead on his Husquvarna 450 motard bike, with a gaggle of riders bunch up behind him including the sons of two long time racers from New England. Alex Kates, son of GMD Computrack’s Peter Kates, and Lukas Doucette, son of LRRS #1 plate holder Rick Doucette, were embroiled in a five-rider scrap, until young Doucette used a little too much bar input and slid his R3 (which was supposed to be piloted by his father in the next race) into the grass. A broken handlebar prevented his continuation and spread out the pack battling for 3rd. Muscaro steadily pulled away from the field, and the KX250 (2-stroke) mounted Juan Restrepo established himself solidly in 2nd place. Behind the two leaders, 13-year-old Brianna McHugh was turning heads on her Kawasaki Ninja 300 (her first weekend riding a full size motorcycle). Charging forward from a mid-pack start, McHugh almost caught the Yamaha 450 of Roger Buzzell at the line as the pair raced across the line for the final podium spot. Young Brianna was award the “Rookie of the Weekend” award for her efforts at the end of the day.

The final race of the weekend was the Kawasaki Formula Ultralight race, and it had the most excitement of the event. Before the event, a classy Phil O’Donnell lent his Yamaha R3 to Rick Doucette who was unable to get his machine fixed from the crash in the previous race. Doucette rolled up on the unfamiliar machine just in time for the green flag. The Kawasakis of Dan Rosato and young gun Ben Gloddy led off of the line, and Gloddy took over the point position as he drafted past Rosato on the back straight. Not to be left behind, KTM rider Chris Woodman followed Gloddy past Rosato, and the pair started to stretch away from the field. At the halfway point, Gloddy had pulled a slight gap on Woodman and the KTM rider was determined not to let him get away. In the fast left hander coming onto the front straight, Woodman low sided, slid in the grass and his motorcycle did a complete 360. The crowd, assuming his race was over, cheered mightily when the determined Woodman ripped off his broken bodywork and re-joined the race! Meanwhile, Gloddy had distanced himself from the field and the Ninja 250 mounted Danny Weems had charged all the way up to 3rd place, riding the wheels off of his under powered machine. However, on the penultimate lap he pushed things a touch too far and slid off course in the off camber Turn 10. Weems also remounted to finish, with the final order at the end Gloddy, Rosato, Doucette, Woodman and Weems. We can’t wait for round #2!