NESBC: Race Report And Results From Round Two, At New Hampshire Motor Speedway

NESBC: Race Report And Results From Round Two, At New Hampshire Motor Speedway 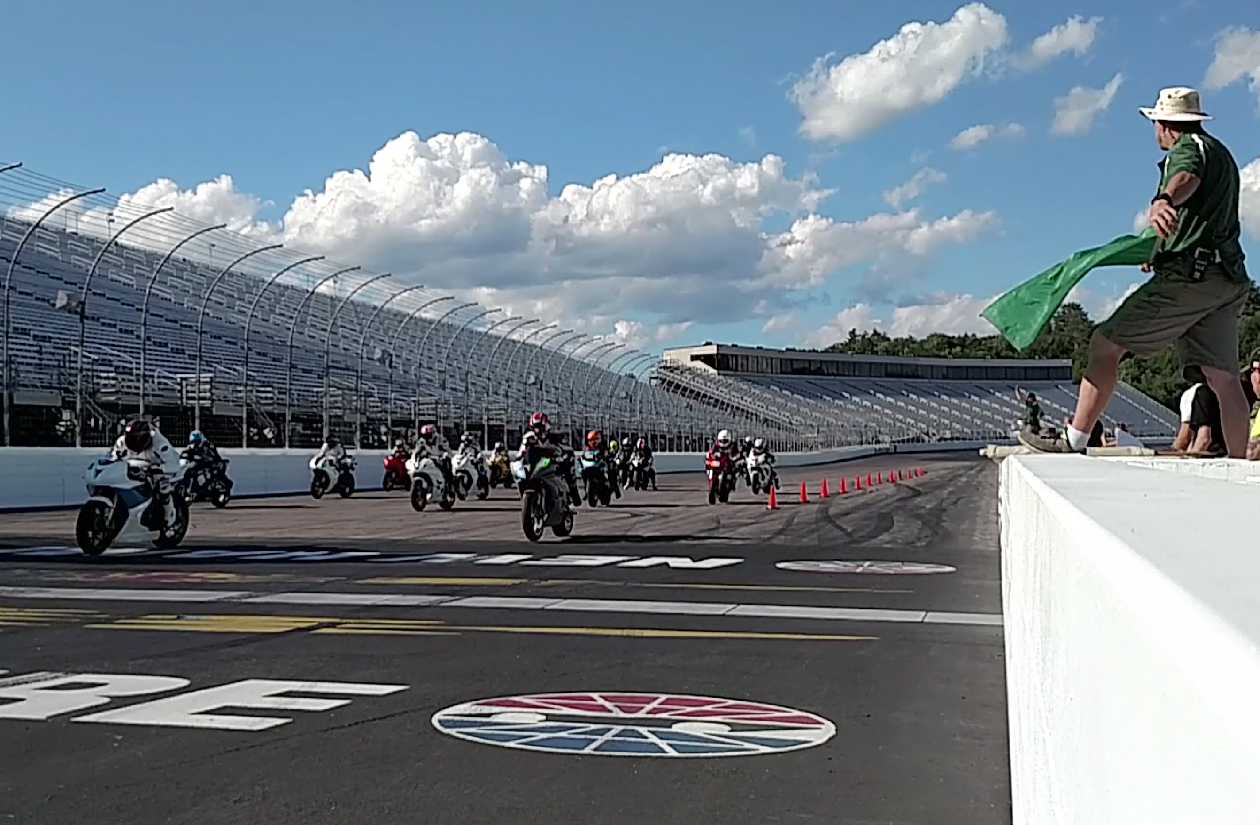 Round Two of the 2017 NESBC series was held July 2nd at New Hampshire Motor Speedway, and the change of venue to the historic Loudon circuit brought in a host of new faces. NESBC events are a track day event that conclude with a series of 6 races at the end of the day. Street bike classes are purposely set up as low pressure, fun events that give track day participants a feel of what a race really feels like. Intermediate classes are for highly experienced street bike riders and newer racers. The purse paying Formula 300 and Motard classes are purse-paying contests that showcase top talent on entry level motorcycles. These feature races pay out over $1000 in each class over the top 5 positions. Riders in all classes join together to compete in the NESBC Team Championship, which pairs together these experienced experts with the new racers and track day riders to form friendships and to give these newer riders some mentors to help develop their riding skills.

Sunday’s races went off without a hitch, and the perfect 80 degree sun brought out full grids in all 6 races. The riders all handled them selves extremely well, as not a single motocycle tipped over during any of the events. The day began with the Kawasaki Formula 300 event, and regular LRRS fast guy Gunnar Oulette was the heavy favorite going into the event on his Kawasaki Ninja 300. Behind Oulette was the Yamaha of Phil O’Donnell and the KTM of Chris Woodman, a testament to the parity found in the Formula 300 racing in New England. Woodman got a tough start, but made a steady charge at O’Donnell that ended up falling a lap or two short. Behind the lead trio was the Kawasaki pair of Roger Ealy Jr and the rising star 14-year-old Teagg Hobbs. Hobbs, jumped out front with a great start, but the cagey Ealy chased him down by the halfway point and then didn’t stay around long to give the youngster any pointers. Heading into round three Woodcman leads the points with O’Donnell and Ealy no far behind.

Next, the Arai Intermediate A & Bazzaz Intermediate B riders lined up and there was action throughout the field. Tim Barrows and his Yamaha R6 grabbed the holeshot and was chased closely by Ducati 959 of Rich O’Connor and Yamaha R6 of Daniel Weems for the first several laps before pulling out a comfortable lead that held to the finish. Further back in the field there was plenty of action and the Ducati 848’s of Dustin Hawks and Chris Decellis rounded out the top 5 in the “A” class. Meanwhile, the Intermediate B riders had an epic battle at the front. Stephanie Miskell grabbed the holshot and looked set to claim her first NESBC race victory, but the hard charging Ryan Sikorski was having none of it. The gap between the two stayed steady throughout the major portion of the race, but on the penultimate lap Sikorski made a big move on the brakes into Turn 3 and then put his head down in traffic to take a clear victory. Glen Cavanaugh rode a great race after starting from the last row of the large field and charged all the way up to third, with Chris Girard and the under-powered Michael Vallante rounding out the top 5 in the “B” class.

The street bike classes featured huge grids, and in the Hindle Street Bike 1 division the race had to be split in to two separate classes (middlewieght and unlimited). To add to the drama, the speedway experienced a power outage as the events were going off, causing a red flag on lap 4 of the Unlmimted class and disabling the camera used for timing and scoring. There was a wide variety of machinery on the grid, which made for some intersting spectating to be sure! It’s not often you see a Ducati Streetfigther, Kawasaki ZX9 and an MV 800 lined up on the starting line together. Fred Suoma on his Yamaha R1 rocketed away from the field, followed by the ever-nervous Laura Fuoco on her Ducati 848. Fuoco made a fantastic charge from the back row and ended up ahead of a trio of riders that were battling all event long. In the end David Lin used his Ducati Streetfighter to get the best of the MV 800 of Andrew Calebrese and Ducati Hyper 821 of Nicholas Burnell. The Street Bike 1 Middlewieght class was the biggest runaway of the day, as NESBC rookie Jeff Gray stormed away from pole position on his Yamaha R6 and left the rest of the field well behind. Jason Fairdough had a similarly easy time on his GSXR600 followed by the tight trio of Justin Beaulieu, Chris Chau and Tony Wells.

In the smaller Dunlop Street Bike 2 division, Billy Halbertsadt of Nearby National Powersports stormed out of the gate to the lead on his Ducati 821 Hypermotard, followed by the Kawasaki 650 of John Bain and the Suzuki 650 of Carl Williams. Further back in the field the Mike Wang machine worked it’s way up to 4th place, just ahead of the Yamaha Motard bike of Roddy Theriault.

The final race of the afternoon was the Firsttrax Motard race, and top Penguin coach Eric Shaw showed the field the way from lap one. Honda mounted Ryan Hobbs hung tight for several laps before fading back to a tight battle with Jason Routhier, Adam Clark and Bill Morey. As Shaw pulled away, Morey was the rider on the move. He used his new Husky 450 to first pick off Clark, Routhier, and then as the white flag was displayed passed Hobbs and pulled out to a clear 2nd place finish. Shaw treated the crowd to a near vertical wheelie that carried all the way past the finish line almost into the braking zone of turn one, and gave everyone something to smile about as they packed up and started thinking about next round.

The Team Championship standings remain tight, with less than 30 points separating the first and fifth place teams. With up to 240 points available, it’s anyone’s game to pick up the $1500 cash bonus at the end of the season. Round 3 of the NESBC series is scheduled for Saturday July 15th at Canaan Motor Speedway. Information can be found at http://www.penguinracing.com/NE-Sport-Bike-Club

Editorial Note: Use the scroll and zoom tools in...
Read more
World Endurance

This weekend’s results are brought to you by 6D...
Read more
Load more