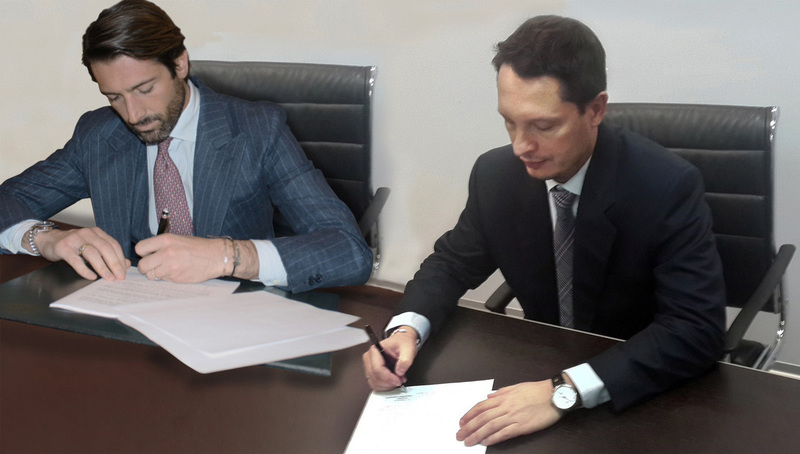 MV AGUSTA MAKES ITS OFFICIAL RETURN TO RACING WITH THE RUSSIAN YAKHNICH MOTORSPORT TEAM Varese, 15 November 2013 – More than 37 years after its last success in the Gran Prix competition, MV Agusta makes its official return to the premier class in the (Superbike) World Championship racing series. The historic Italian brand that has one of the most significant records in the history of motorcycling, with 37 constructors’ and 38 rider world championship titles, has committed to an official return to competition and it will do so thanks to an agreement made over the last few days between the President of MV Agusta Motor S.p.A., Giovanni Castiglioni, and Alexander Yakhnich, owner of Yakhnich Motorsport. The Russian Yakhnich Motorsport team has already shown that they are one of the strongest teams in the world championship by winning the 2013 World Supersport title, just two years after their rookie year in the championship. Since Yakhnich Motorsport is the organizer of the World Superbike round in Russia, the collaboration will also have very important aspects in terms of international relations between Italy and Russia. In fact, the agreement signed by the Italian manufacturer and the Russian team results in the formation of the Official “MV Agusta Reparto Corse – Yakhnich Motorsport” Team, which will participate in the World Superbike and World Supersport Championships starting in the 2014 season. MV Agusta and Yakhnich Motorsport will be jointly committed to developing the bikes for both the World Superbike and Supersport series. They will also closely work together to build replica bikes for satellite teams that may decide to race with the glorious Italian brand. With this agreement MV Agusta and Yakhnich Motorsport are anticipating a long-term cooperation so as to develop important commercial, industrial and communication synergies together in the Russian territories. The goal for the 2014 season is to compete as a key player in Supersport series, in which the F3 has already demonstrated a high level of competitiveness in 2013, and to develop the F4 RR for the Superbike World Championship (Factory) with the objective of being a leading protagonist in the 2015 season. The MV Agusta Reparto Corse – Yakhnich Motorsport team will debut with two riders in the Supersport class and one rider in Superbike, whose names will be announced by the end of November. Yakhnich Motorsport and MV Agusta will be fully committed to renewing the glory of the historic Italian brand and building a strong future for Yakhnich Motorsport. At the contract signing Giovanni Castiglioni, President of MV Agusta, had this to say: “The official return to racing is a very important and ambitious step for MV Agusta. However, my decision came directly from my heart. Racing was always my father’s greatest passion and he led his companies to victory in every form of racing: from the 500 GP Class and the Paris-Dakar with the legendary Cagiva to the first world championships won in Superbike with Ducati as well as off-road with Husqvarna. But his true dream was to see MV race again. I am very proud to be able to see this happen.” Alexander Yakhnich, President of Yakhnich Motorsport said: “We have worked very hard to achieve great results in 2013. With MV Agusta, new and important opportunities have been opened up to us. We are very pleased with this agreement and we are looking forward to achieving a number of victories very soon.” More, from a press release issued by WSBK Dorna: MV Agusta Reparto Corse back on track with Yakhnich Motorsport Barcelona (Spain), Friday 15 November 2013 – After more than 37 years from the last World Championship win (G. Agostini, Nurburgring, 1976), MV Agusta makes its official comeback to international motorcycle racing. The iconic Italian brand, which has a record of 37 Championship and 38 Manufacturers titles, will be officially involved at world level with the Yakhnich Motorsport Team. Starting from 2014, MV Agusta will take on the challenge of both the eni FIM Superbike World Championship and the Supersport World Championship which was recently won by Yakhnich Motorsport, in only their second season in the series. MV Agusta and Yakhnich Motorsport will carry on the bikes development for both the Championships, this is why they gave new life to the historical brand “MV Agusta Reparto Corse”. Both companies are focused on a long-term partnership that goes beyond sporting activities and extends to high-tech and international industrial collaboration, as well as to international relations between Italy and Russia – since Yakhnich Motorsport is also the organiser of WSBK Russian Round. The goal for 2014 is to race up front in World Supersport – where the F3 has already shown its potential during the past season – and to develop the F4 RR in order to be protagonist in 2015, when new technical regulations will come into place. Riders line-up for Yakhnich Motorsport MV Agusta Reparto Corse will be revealed by the end of November. Giovanni Castiglioni, MV Agusta President said: “Our official return to racing is a very ambitious and important step for us. Racing has always been my dad’s greatest passion and this drove the brand to victory in many disciplines of motorcycle racing, from 500cc GP to Paris-Dakar and to the first Superbike World Championship titles won with Ducati. His dream was to see MV back to racing and I am so proud to be the one doing so.” Alexander Yakhnich, Yakhnich Motorsport President: “We worked very hard to achieve the great results of 2013. The partnership with MV Agusta opens a whole new set of opportunities. We are truly happy of the agreement and we look forward to further success.” Javier Alonso, WSBK Executive Director: “We’re glad to announce the official return of MV Agusta to the WSBK series. The Italian brand is not only globally important but has an iconic and successful racing history, so welcome back and all the best to both the Manufacturer and the Team for the upcoming season.”