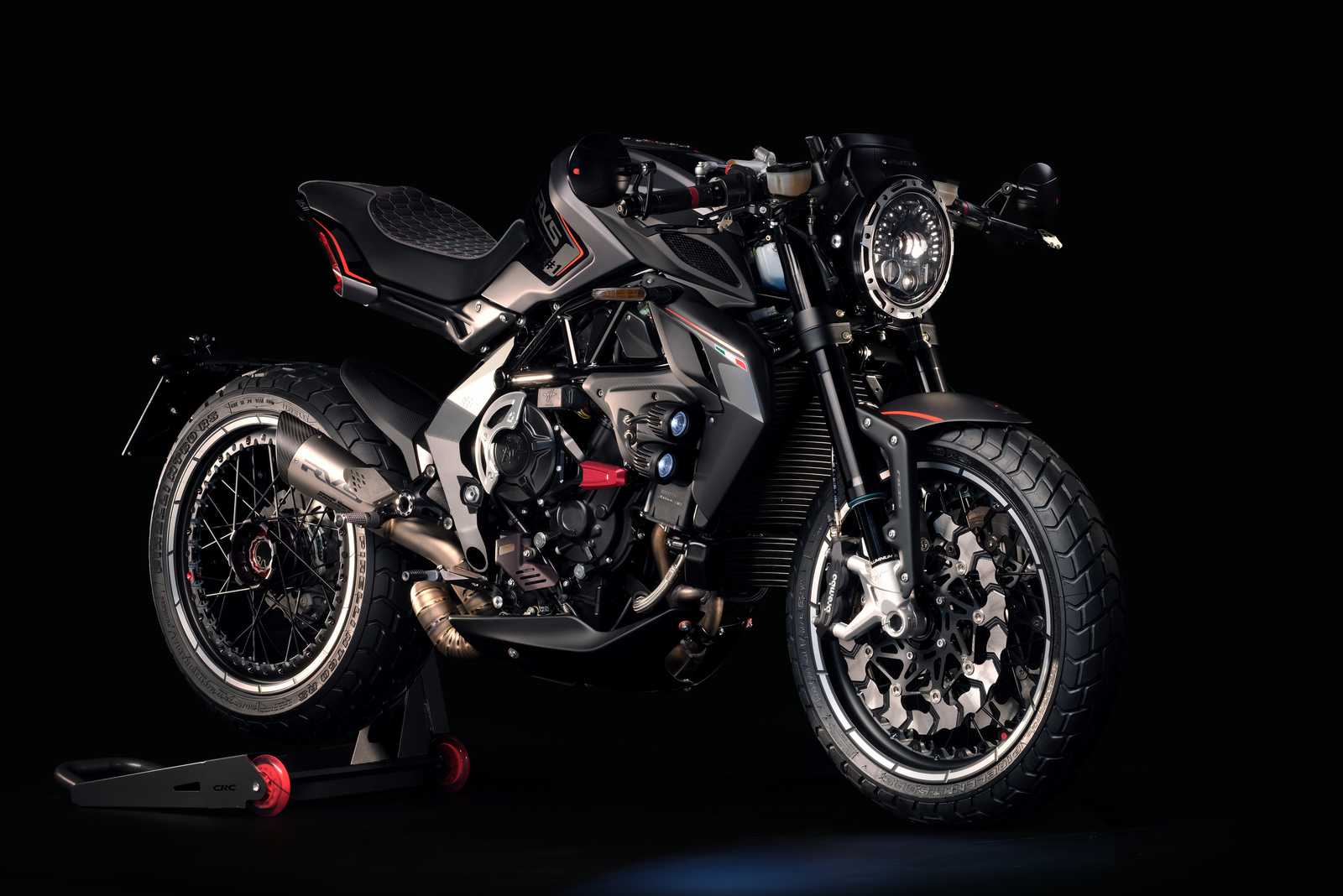 An idea spawned from the close bond between MV Agusta and CRC (Centro Ricerche Castiglioni). RVS stands for Reparto Veicoli Speciali: short for design and engineering at the very highest level. Not just quality, but perfection. Not just research, but vision. Not just performance, but emotions.

MV Agusta presents RVS#1, the very first project created by the Reparto Veicoli Speciali. A debut that is all about uncompromising, extreme content. Designers in the Reparto Veicoli Speciali took an already iconic, personality packed model as their starting point and then set about imagining and building a truly unique bike that stands out for its set-up, component quality, overall styling, performance and exclusivity. It will be assembled on the new ‘special vehicles’ production line at the Schiranna factory.

A limited, hand-built edition, a motorcycle that reflects the “one man, one bike” philosophy. Every single RVS machine has a numbered, lightweight titanium badge applied to the splendid steering head, itself a masterpiece of CNC machining.

The exceptional front light cluster stands out not just in terms of its styling and careful construction; LED segments are activated according to the dynamic parameters defined by the inertial platform, ensuring perfect just where it’s needed.

The heart of the RVS#1 is MV Agusta’s powerful, in-line three-cylinder 800 cc engine: 150 hp at 12,800 rpm and unbeatable in terms of its compactness and power-to-weight ratio. A technological icon that combines outstanding thermodynamic efficiency with supersport performance.

Carefully selected components that combine lightness and practicality have drastically reduced bike weight to just 160 kg – eight less than the standard Dragster 800 RR (weight-power 0.93 kg per hp in the kit configuration). Numbers like these speak for themselves. As does the powerful three-cylinder engine, with its eye-watering acceleration (0-100 kph in 3.72 sec.). Featuring two injectors per cylinder and the renowned counterrotating crankshaft configuration (that reduces inertia when changing direction), the engine is now further refined thanks to upgraded components such as the chain tensioner, starter motor, camshafts and valve guides; combustion chamber flows have also been optimised. The outcome is a more efficient, quieter Euro 4 engine that boasts unparalleled power and finesse, as seen, for example, in the removable gearbox. With redesigned gears, the latter increases the available shift time by 47%, ensuring smoother, more precise shifting. What’s more, the RVS#1 incorporates specially developed engine strategies for an even more exciting, exclusive riding experience.

The RVS#1 frame is essential in that it is lightweight and exceptional in that it is designed with dynamic performance in mind. The main tubular steel trellis frame features the traditional aeronautical-grade aluminium alloy side plates, the model name elegantly engraved on the right-hand side. Details highlight the quest for excellence: the instrument panel is mounted on a metal support, designed and built directly by CRC, the Research Center in San Marino. Brake and clutch lines are model-specific, as are the stunningly styled Braking Sunstar Batfly front discs. The brake and clutch fluid reservoir plugs are made of billet aluminium.

Rigorously wire-spoked, the Kineo wheels have a striking machined profile. They also stand out on account of the one red-coloured nipple – a real touch of flair. That same hint of colour, evocative of the racing world, is seen at the edge of the side stand. Because nothing on the MV Agusta RVS#1 has been left to chance. Grips, for example, are now ‘grippier’ thanks to special relief moulding and are decorated with another flash of red in the form of a diagonal stripe.

Up front, the adaptive headlight is a masterpiece of style and performance. A carefully crafted outer ring reproduces a part of the MV Agusta logo. The inner area is simply astounding: LED segments, in fact, are switched on according to the dynamic parameters defined by the inertial platform incorporated in the headlight. That means the LEDs come on/go out depending on the speed and tilt of the bike, their powerful beams lighting up the appropriate section of road. Just one example of how cutting-edge technology and attention to detail come together perfectly on the new MV Agusta RVS#1.

The rear LED light cluster ensures optimal vehicle visibility and features a new ‘smoked’ cover. Tank and seat provide further evidence of craftsmanship: the former has been machined so that titanium strips can be set in it, making an already original design inimitable. Redesigned to enhance ergonomics and comfort, the seat has an exclusive eye-catching honeycomb pattern.

The right-hand side of the bike features a powerful pair of LED spotlights, exclusive to the RVS#1. Mounted on a light carbon fibre support, the two LED lights are controlled by a dedicated handlebar switch and are connected to a pair of on-off status indicators. Machined-from-solid rear view mirrors are perfectly consistent with the RVS#1 project, as the evocative red-eyed skull graphic clearly indicates.

The titanium exhaust included in the kit was designed and built by SCProject together with MV Agusta: this racing-derived model significantly improves performance while providing a clear weight saving. It gives the rear of the RVS#1 rugged personality, bringing out the bike’s refined yet muscled design. Designed for use on race tracks or areas not open to public traffic, this exhaust is not road-legal. The rider footpegs – anodized and then CNC machine-finished – take their cue from the MV Agusta cogwheel logo.

That characterisation extends to the Pirelli MT 60 RS tyres, which bring out the full aesthetic and practical potential of the RVS#1, extending its scope beyond the traditional horizons of road bikes.