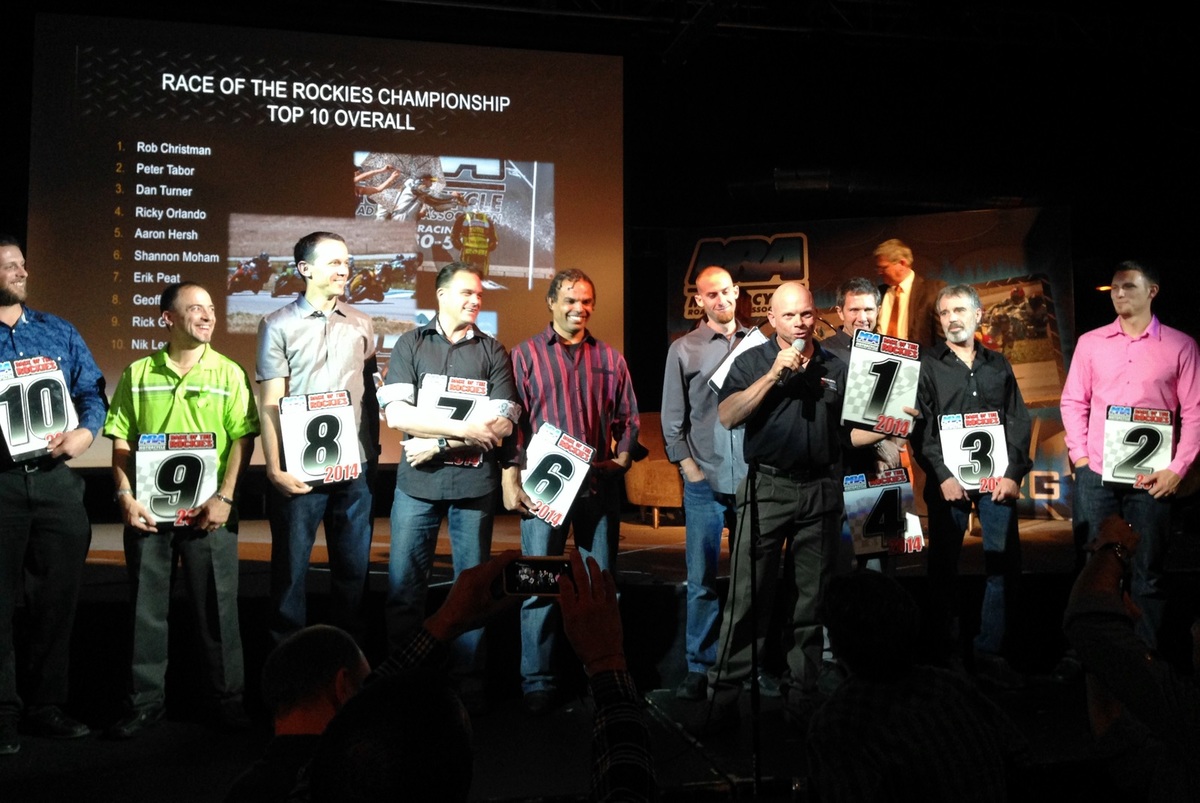 Denver, CO — In a time-honored tradition the MRA celebrated the people that make club racing the amazing sport that it is this past weekend during its annual awards ceremony. Riders placing in the top 5 of every class in the MRA were rewarded for their season long efforts during the ceremony with presentations of trophy plaques featuring the class name, their position, the class sponsor and a photograph of themselves racing during the season.

The MRA honored two long-time volunteers who both retired at the conclusion of the 2014 Season. Chaplain Paul “Boots” Reimer, the MRA’s spiritual leader, retired after 25 years of service. Since 1989 Chaplain Boots provided the MRA with a morning invocation, ran a Sunday morning Chapel Service and was the first to contact injured riders following each race weekend.

Since 2003 the Merle Jensen Memorial Award has been an annual award presented in recognition of service to the club. The first recipient of the award was Chaplain Boots and in 2014 the MRA retired the award by presenting it to him for a second time.

Starter Bob Heaton has been instrumental to MRA race weekends since 1994.His role as the starter was obvious, but he also was a strong adviser on the MRA safety team and our on-track meteorologist. Bob’s dedication was unwavering. In his 20 years of service he never missed a race weekend. He has overseen the starting procedure change from flags to lights as well as seeing a variety of operational changes based on the variety of tracks and changes at those tracks over the span of his career.

With the retirement of the Merle Jensen Memorial Award the MRA introduced the Bob Heaton Distinguished Service Award that was presented to Rick Bickhard for his dedication to improving the club’s timing and scoring system. For the past year Rick has set aside his own racing program to dedicate his time and effort to developing a more efficient system for the MRA.

Wyeth Jackson was honored with the MRA Sportsman of the Year Award. Wyeth is a long-standing member of the club and a former member of the board of directors, but her dedication to the club has continued well past her elected term. Wyeth has constantly promoted the MRA’s Super Street program to female riders and has become a role model for many throughout the paddock.

Race of the Rockies GTO and Overall Champion Rob Christman adds a #1 plate to the wall in 2014 after being able to defend his 2013 title. Christman also took home the Formula 40 and Open Superbike championships in 2014. The Race of the Rockies GTU Champion, Shannon Moham was also the annual Clubman Champion for acquiring the most total points across all classes during the 2014 season. In addition to the ROR-U Championship Shannon brought home the first place plaques for Lightweight Grand Prix, Modern Vintage GTU, Supertwins GTU, Solo Endurance Lightweight and Solo Endurance Heavyweight.

Special Awards given during the evening included:

Sportsman of the Year – Wyeth Jackson

The Motorcycle Roadracing Association is 501(c)(7) non-profit organization dedicated to promoting safe and competitive motorcycle road racing events for enthusiasts in Colorado and the surrounding area. For more information, go to http://www.mra-racing.org