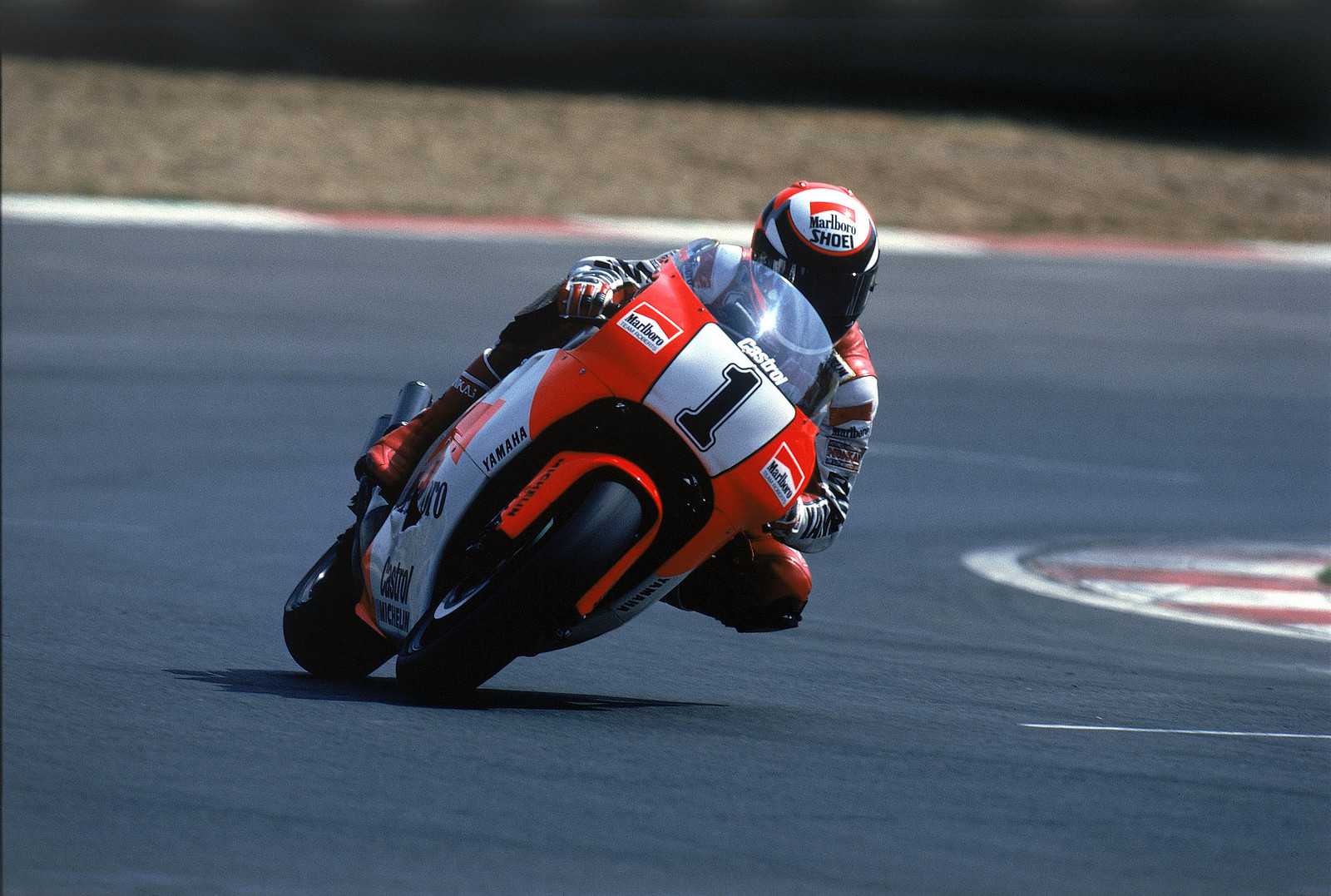 Yamaha reached the 500th Grand Prix victory milestone at the Grand Prix de France at the Le Mans Bugatti Grand Prix race circuit. This exceptional achievement is a splendid occasion for Yamaha’s racing stars of earlier years to celebrate the highlights of the company’s 56-year run in Grand Prix racing.

Yamaha is proud to have reached the 500th Grand Prix milestone today at the Le Mans Bugatti Grand Prix race circuit in France. This achievement has been reached through solid partnership and teamwork within the ’Yamaha family‘.

There are many more Yamaha stars who played a key role in the company’s journey to elite status, including multiple World Championship winners Jorge Lorenzo (44 wins) and Eddie Lawson (26 wins).

Yamaha has created a micro website to give an overview of how their riders’ efforts made this massive achievement possible. The pages feature a special 500th victory video, an infograph, some of the best historical photographs of Yamaha‘s 56-year Grand Prix racing run, as well as overviews of all the Yamaha victories, riders and bikes that brought about this landmark occasion.

My first invitation by Yamaha to Japan was very exciting and it was amazing for me to race in the first Suzuka GP. When I returned to Yamaha’s base at Hamamatsu after this event to recover from days of testing and the race, I was later invited to ride their factory bikes in the 1964 season, but only five GP’s would be factory supported. The early years weren‘t easy and I feel that, with more support, I would have had much more to give to Yamaha, but I am very happy to have contributed to gaining Yamaha’s 500th GP win thanks to my victories in the 125 and 250 classes. Yamaha GP team became the “Happy Team” in later years, especially now, as Yamaha Motor Racing have become a very organised team under the management of Lin Jarvis and his admin team.

The highlights of my time with Yamaha are obviously my three World Championships. I raced six years of Grand Prix with them and I was on the podium 64 times in just over 80 races so we had a lot of success together. Yamaha‘s DNA is racing. I won 24 races with Yamaha and I can say that every time I raced with them they were all in. We squeezed every bit of performance out of the bike, out of myself and out of the team. Yamaha was as committed to the project as I was. We couldn‘t have accomplished all that we did without each other. We were a great team. Yamaha has been an easy fit for me because they are a great company and I‘ve always felt welcome there. When I look at my link of the chain that is Yamaha‘s 500 wins, I know what I contributed to it and it‘s amazing to think that Yamaha has been there for all 500 of those. It‘s very special for me to be a part of that, because their commitment was to win and to give myself and all these other riders the opportunity to win. Being a Grand Prix winner is the ultimate for a road racer and to have 500 of those is amazing. I‘m very honoured to be a part of that.

In 1978 when I didn’t ride for the factory, I won the World Championship and then the Japanese manufacturer said: ‘No, he is riding for me!’. So I went to Japan in February, but didn’t sign a contract immediately. I went out and tested, broke my back, ruptured my spleen, broke my left collarbone and they didn’t know at the time whether I would live or ever race again. I lay in hospital for three weeks with tubes everywhere and I thought they were not going to sign the contract with me, but Mr. Hada, who was the head of all racing and legendary at the time, walked in the hospital one day and said ‘Come on, son, we have a contract to sign!’. That’s Yamaha, it’s a big Japanese family. The work ethic of the Yamaha employees, which I noticed being an American, was awesome. Yamaha is the most western thinking company in the motorcycle business and that’s why they are the most winning motorcycle company in the motorcycle business. I will always consider myself part of the Yamaha family, it was one of the best times of my life and I’m still enjoying it. As far as contributing to the races, I think that’s probably secondary to being part of the Yamaha family, but I’m very grateful to be mentioned with the current stars and all the people before me. They are all great racers, it’s a big honour for me, I can‘t thank Yamaha enough.

Congratulations to Yamaha for its 500th victory in Grand Prix racing. I am very proud and honoured that I raced 12 years with Yamaha in my 15-year long career. I would like to thank Yamaha for all they gave me and for what they keep on giving me today. My 19 victories are just ‘a drop’ in the ‘sea of victories’ they have achieved, but I’m really flattered that my name is on the list of great champions that have allowed Yamaha to achieve this stunning result. I really want to congratulate all the people who work in Yamaha‘s racing department and I wish them 500 more victories, which they deserve for their commitment, efforts and humanity.

Being amongst the riders who‘ve won races with Yamaha in the World Championship is a great satisfaction. Although I also raced and won with other manufacturers, I have always felt to be a ’Yamaha rider‘, because I have always felt ’at home‘ with them, especially from a human point of view. Being ’in the same press release‘ with Rainey and Roberts: it‘s a source of great pride. My first victory in 250cc at the Nürburgring in mixed weather conditions and the victory at Suzuka in 1990 are the best memories I have of my career with Yamaha. All other victories in 250cc, for instance at Laguna Seca in 1994, where I was the first non-American rider to win there, are still in my mind. What really makes Yamaha different is their philosophy: they always give the rider the best bike for him, they make it for him; this is something that you don‘t find anywhere else. Now that I am in the Factory Team in a different role, working with Valentino, the rider who has won the most victories for Yamaha, this gives me a completely different feeling of pride, although just as strong as when I was a rider.

I have beautiful memories of my years with Yamaha. When I left MV Agusta and Italy in 1974 and moved to Yamaha I had some concerns, but after my trip to Japan to meet the management and the engineers, I realised I had found a new family. I was pampered and I had lots of attention paid to me. We prepared the bike together, especially for the Daytona 200 Miles, that I won on my debut. Being a Yamaha rider gave me great pride as it‘s one of the biggest and most prestigious manufacturers in the world, capable of developing pioneering technologies. With Yamaha I won two World Championships and I am happy and proud that I was the first rider to deliver a title in the premier class. 500 victories is a stunning achievement and that‘s the result of an incredible job, technology, and professional determination. Never forget: you are there to win!