MotoGP: Marc Marquez Reveals His Keys For Misano And The Championship

MotoGP: Marc Marquez Reveals His Keys For Misano And The Championship 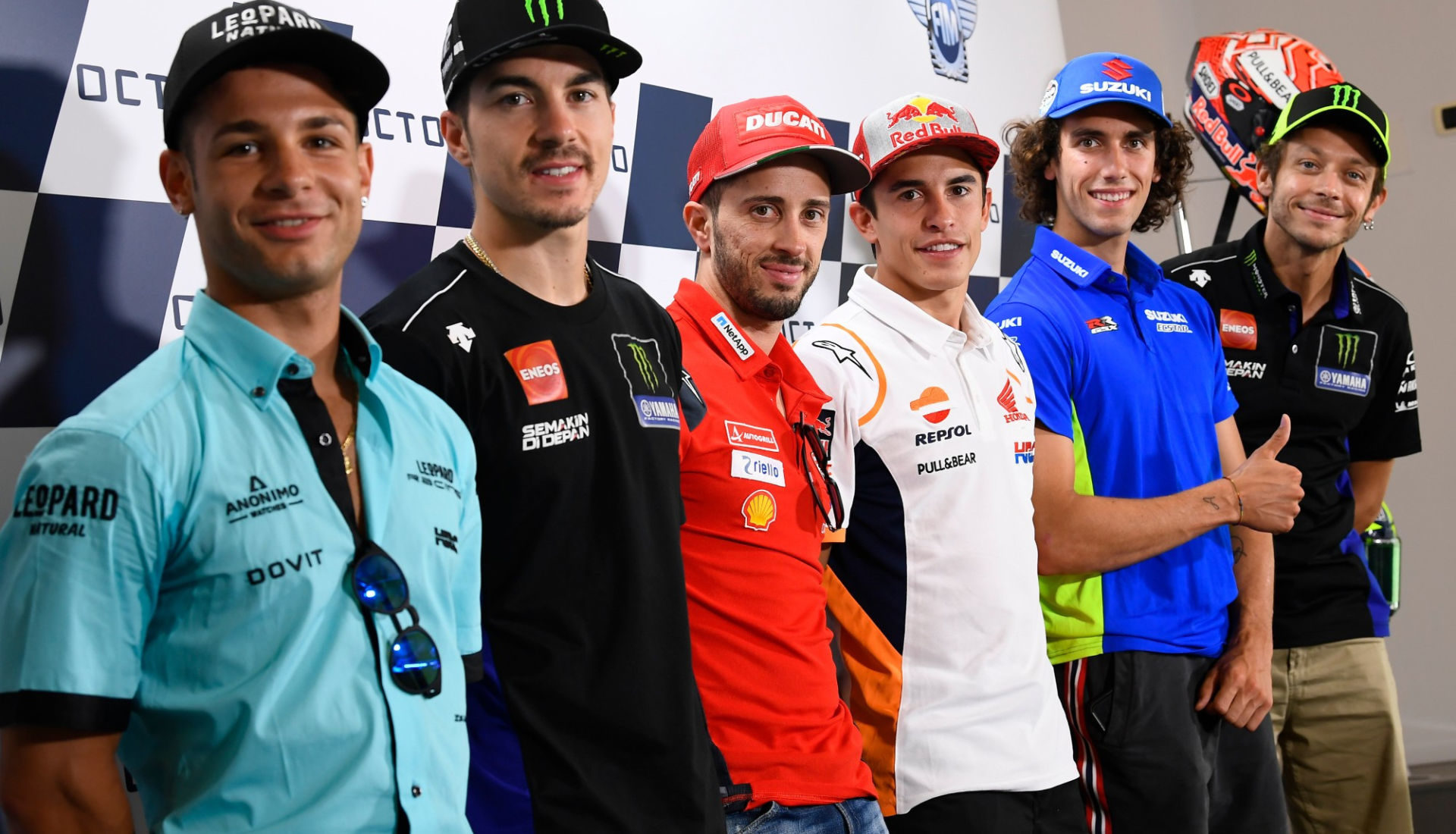 Marquez was first to talk, with that incredible British GP first on the agenda before talk turned to the recent Misano test.

“Yeah of course it was not the best last corner for us, but anyway I’m happy because Silverstone was one of the circuits we struggled at a lot last year and this year we were there. The Misano test was quite interesting, we will check this weekend. Race pace was not so fast compared to last year but we were competitive, especially Yamaha riders were very fast, Dovi was not 100% fit but he will be fast, and he’s the winner from last year. Apart from that we have a good advantage in the championship, we need to be calm, try to finish races and see what happens in the future.

“The key is it’s difficult to be consistent every lap. 2 or 3 hard brake points it’s hard to be consistent, also sector 3 with all the fast corners…to be consistent there all the race is difficult. It’s a race track that I like, we will start in a good way, we have new things from the test we need to check. Anyway in our box we don’t need to be crazy. Find the best of what we have and take points every weekend, that’s what’s important.”

2018 winner Andrea Dovizioso spoke next, beginning with how he feels after the big crash at Silverstone.

“I feel good fortunately, we worked hard at home and we were able to complete a test, it was important to make a test before the race. The feeling wasn’t perfect but it was important to do some laps. I feel good, I’m happy, I’m 100% fit, I did some motocross just to be sure and I’m ready. Last year was good for us, we had a special race, but I’m expecting a different weekend this year. The competitors are very strong, in the test a lot of riders have good pace but the weekend is always different. And the conditions are maybe a bit different, we have to see the grip we can find because at the test it was different than last year. So we have to see, I think it will be important for every bike.”

And overall? 78 points is his deficit to Marquez, but he says it’s the bigger picture. “I think my best way to make the best result is the same way I’m racing now. For the Championship 78 points is a big gap, but it’s a bigger gap if you think about recovering the points to Marc. It’s not just about 78 points, there’s not a big reason to think about the Championship. Especially because in some races we were quick and some not, so we have to improve those things.”

Fresh from his second premier class win, Rins took the mic next. And that was, of course, where the Suzuki rider began.

“It was unbelievable to get the victory in Silverstone, especially for the battle with Marc. I saw the race six or seven times. After the victory I think we are a little stronger in the race, in the race I’m able to fight, and we arrive here after a good test. We found some things, two days of testing and our setup is more or less clear. But things will be difficult because all the riders are there and it’s a small track, so it will be a fun weekend.

“During all the Fridays we are trying to improve, to see the setup, do a lot of laps on the tyres. Now I’m ready to do one lap at the end of the Championship, from this year it was more difficult. Silverstone wasn’t enough, we were in Q1, so I will try to be more in the top positions.”

Viñales spoke next, fresh from his rostrum finish in the UK where he came home third and almost in touching distance of the duel ahead.

“For sure we need to try and keep the momentum. I feel really good on the bike and especially with myself. Confidence is really high, so we’ll try to push the maximum, try to keep a good level all weekend and during the race be at the front. The test has been really successful for me so we will try to do our best.

Rossi, meanwhile, will be doing his best to take back fifth in the title fight from Viñales, with the two having been locked close together for a good few races. But first, the nine-time World Champion talked about the pre-event on Tuesday that saw him take to the streets of his hometown of Tavullia on the Yamaha M1.

“It was a great moment because it was a dream I had when I was a child. We know very well that road because we always go up and down with our scooter, the road is fun with a lot of corners. So I said ‘one time it will be good to try my M1 in Tavullia’. It was like this and it was fun. I have a good feeling and on the road, I expected it to be more difficult, but the bike was ok!”

And the Grand Prix itself? The ‘Doctor’ sounds ready to fight near the front on home – truly home – turf.

“For sure here in Misano it’s always a special Grand Prix, it’s really my home Grand Prix. In the last races I was a bit better but in Silverstone after a solid weekend, in the race I wanted to fight for the podium but I was not strong enough. So we will try another time here. We did some testing, important testing, my pace was quite good, I feel quite well with the bike so we try, we are ready and we will see if we are strong enough to fight for the podium.”

“Last year I took my first victory here and it was very important for me. Very impressive because I didn’t expect it. This year I have had some good results so far, I’m trying to have good races only. I’m so excited to start this weekend and try to have a good race!”

And the future? It’s looking bright as the Italian spoke about his move for next year: “Italtrans is a fantastic team. For me it will be to experience first, but I’m so excited to ride the bike, I never tried a 600 bike before! I want to try the bike as soon as possible, but for now I have to be focused on this season.”