MotoGP: More On Marc Marquez Being Penalized, Plus Sunday Schedule Changes At Sepang

MotoGP: More On Marc Marquez Being Penalized, Plus Sunday Schedule Changes At Sepang 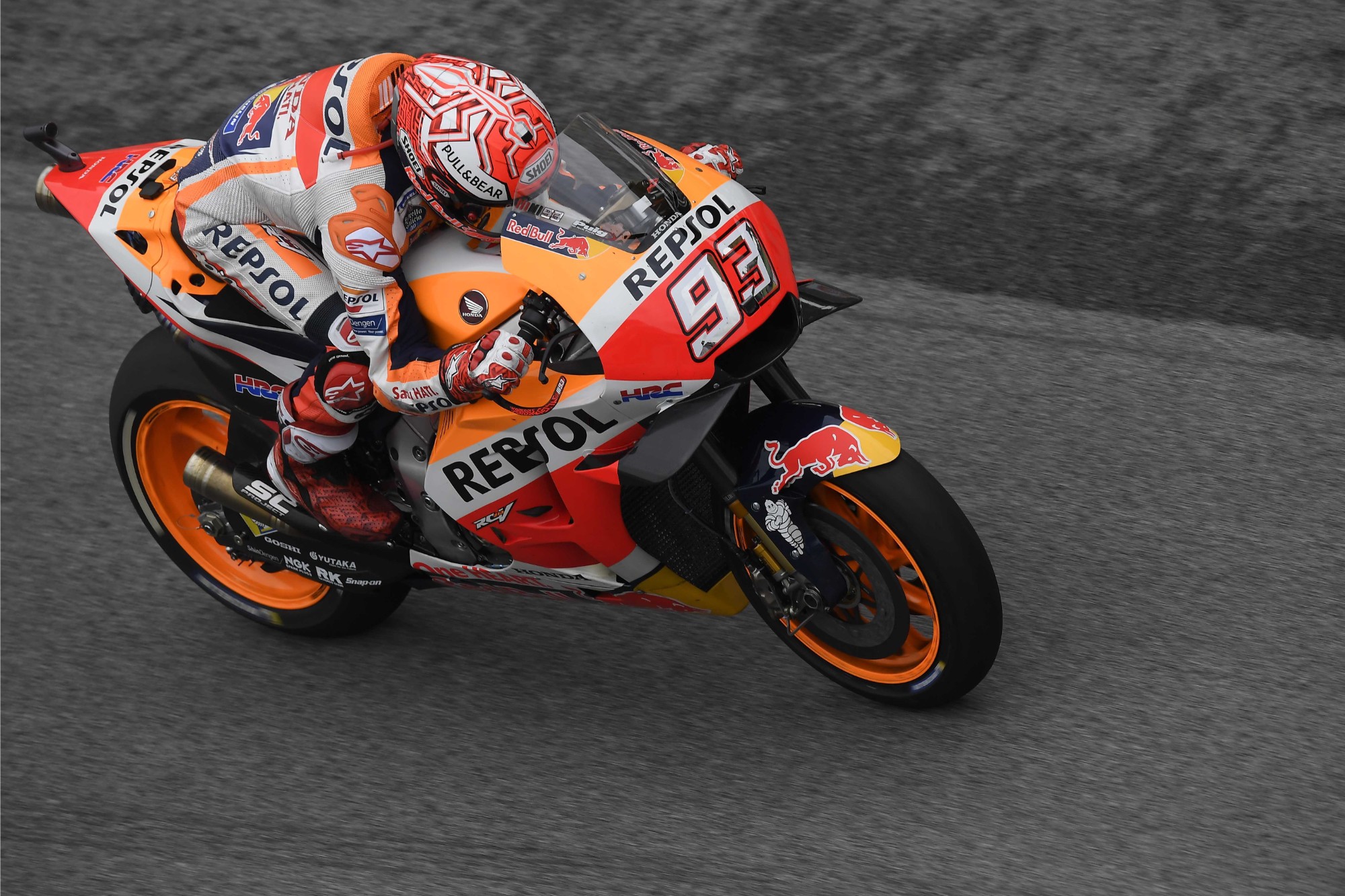 Due to weather concerns after the downpour before qualifying for the premier class, Sunday’s race times have been brought forward. All are LOCAL TIME (GMT +8):

Marquez was half a second clear and took pole number 80 across all classes, but a six-place grid penalty puts him in P7 on the grid

Marc Marquez (Repsol Honda Team) secured an 80th career pole position after he was the early master of the wet Q2 conditions at the Shell Malaysia Motorcycle Grand Prix, but there was a small bump back to Earth not long after for the reigning World Champion as he later crashed – and then another as he was given a six-place grid penalty for irresponsible riding. The number 93 impeded Andrea Iannone (Team Suzuki Ecstar) and will now start seventh.

So what does that mean? It means we have an Independent Team rider starting from pole, with Johann Zarco (Monster Yamaha Tech 3) now on top after going second quickest in the session. Valentino Rossi (Movistar Yamaha MotoGP) starts second, and fittingly, it’s Iannone now completing that front row.

Back at the beginning it was Marquez who led the field over the line and set the first benchmark; a 2:13.641 to edge out Jack Miller (Alma Pramac Racing), who was just behind the Spaniard on track. Iannone was also within a tenth after the first lap, with a mere 0.051 splitting the top three, but with a banker lap under his belt, Marquez then slammed in a rapid second lap to considerably shift the goal posts. A 2:12.161 put him a full 1.264 quicker than the man who’d taken over at the top, Danilo Petrucci (Alma Pramac Racing), as the World Champion put some serious daylight between himself and his rivals. The Repsol Honda rider then lost the front at Turn 4, however, and there was no saving this one.

The field then set about trying to beat Marquez’ marker. Andrea Dovizioso (Ducati Team) shot up to P2 but was still over a second off and then on his final flying lap and then Italian crashed at Turn 9, before Iannone went up to P2 but the gap was remained 0.936. A flying Frenchman then propelled himself into second with Zarco cutting the gap to eight tenths and fellow YZR-M1 rider Rossi then leapfrogging him. Could either go one better on their final attempt?

Zarco put in a personal best lap to re-take P2 from ‘The Doctor’, but the gap between the number 93 and his rivals remained 0.548 after a masterclass from Marquez for his 80th career pole position across all classes. Then, though, news came through of the penalty and although it remains a Marquez pole in the statistics, he’ll be starting seventh.

That’s it from a day of ups and downs at Sepang International Circuit, and engines will soon be on for racing. The MotoGP™ race starts at the earlier time of 13:00 local time – that’s in GMT +8 – after changes to the schedule.

The Spaniard stormed Sepang for pole

Alex Marquez (EG 0,0 Marc VDS) stormed to Moto2™ pole position at the Shell Malaysia Motorcycle Grand Prix, setting the only laptime in the 2:05s to better closest challenger Luca Marini (Sky Racing Team VR46) by a stunning 0.488 seconds. Marquez Fabio Quartararo (MB Conveyors – Speed Up) completing the front row of the grid at the Sepang International Circuit – with ‘El Diablo’ 0.666 off the top…

From the outset, it was Marquez who looked menacing and sure enough on his third flying lap, the Spaniard set a sensational 2:05.629 to go 0.692 faster than anyone else. The gauntlet was well and truly thrown down, with Quartararo and Remy Gardner (Tech 3 Racing) sitting as his two closest challengers in P2 and P3 – 0.026 separating the duo, with Marini just 0.009 off a provisional front row with 15 minutes to go.

The timing screens then went stagnant in Sepang and that seemed to be that, with no one able to vastly improve on their early laps. However, this then changed when Marini went from P4 to P2 with under five minutes remaining, although the gap to Marquez was still 0.488. Quartararo, after being pushed down to P3 by Marini, then set a personal best but it wasn’t quite enough to improve his position as the standings were set.

So it was Marquez who took pole – despite a late crash at Turn 1 – to continue his dominant weekend, with Marini and Quartararo joining him on the front row. Fourth place went to Gardner, the Australian producing career-best qualifying in P4 to finish just 0.052 off the front row, with Mattia Pasini (Italtrans Racing Team) lining up alongside him in P5. Championship leader Francesco Bagnaia (Sky Racing Team VR46) completes the second row ahead of his second match point on Sunday.

His title rival Miguel Oliveira (Red Bull KTM Ajo) remains close, however. The Portuguese rider was heads up Row 3 and was just 0.068 in arrears – with the duo also having played a little bit of cat and mouse in qualifying. Xavi Vierge (Dynavolt Intact GP) ended qualifying in P8, 0.070 away from Oliveira, with Brad Binder (Red Bull KTM Ajo) and Marcel Schrötter (Dynavolt Intact GP) completing the top ten.

Marquez looks like he’s going to take some beating in Malaysia. Will he take his first victory of the season? And can Bagnaia seal the World Championship? The two title rivals line up in tandem on the grid, with Oliveira out to put the celebrations on hold. An intriguing encounter awaits, tune in for all the action at 11:20 local time (GMT +8).

How Bagnaia could win the title

Francesco Bagnaia has his second match point at Sepang. Heading into the Grand Prix he has a 36-point advantage over sole rival Miguel Oliveira (Red Bull KTM Ajo) and to be crowned, he needs to have a minimum advantage of 25 points after the race in Malaysia.

…if he finishes 12th, 13th or 14th and Oliveira doesn’t finish on the podium.

…if he finishes 15th or fails to score and Oliveira doesn’t finish 4th or higher.

Martin on pole, Bezzecchi P2 as qualifying sets the scene for a showdown at Sepang

It was John McPhee (CIP – Green Power) who led for the majority of the session and with 15 minutes remaining, despite Bezzecchi briefly taking over at the top, McPhee had moved the goal posts again – his advantage sitting at an impressive 0.584. That was immediately trimmed to 0.052 with Martin going second fastest, however, and Free Practice’s fastest man Arbolino then jumped up to second – with McPhee then clear at the top by only 0.020.

When it was time for the final lap dash, Martin and Bezzecchi both left it late to head out – the latter crossing the line with just four seconds of the session remaining to begin his final lap. Arbolino, Martin and Bezzecchi were then all up in the opening two sectors, but provisional pole man McPhee was also looking to increase his advantage – and that’s exactly what he did. It was only by 0.060 though, with the three riders behind all on fast laps…

Martin then came across the line to top McPhee’s new benchmark by 0.350, as Arbolino slotted into P2 after he also beat the Scotsman’s time. Bezzecchi then made his final lap count and although he missed out on pole to rival Martin, he was just 0.032 down. The two title rivals therefore start side by side, although the third man in the hunt – Fabio Di Giannantonio (Del Conca Gresini Moto3) – starts down in P13 with a little more work to do.

It’s match point to Martin in Malaysia, but with Bezzecchi breathing down his neck on the starting line, another awesome Moto3™ race looks set to take place. See who emerges victorious when the title could be decided at 10:00 local time (GMT +8).

How Martin could win the title

…if he wins and Bezzecchi doesn’t finish better than 5th.

…if he finishes 3rd, Bezzecchi doesn’t finish better than 13th and Di Giannantonio not better than 5th.

More, from a press release issued by Repsol Honda:

Today Marc Marquez took an historic 80th pole position across all classes, despite the tricky conditions that affected qualifying day at Sepang. Nonetheless, he’ll start tomorrow’s race from seventh place on the grid after being sanctioned with a six-place penalty.

Fair weather is rarely an enduring condition in Malaysia. After enjoying two sunny sessions yesterday and a further dry FP3 stint this morning (in which Dani Pedrosa advanced from 11th to fourth place, earning a direct passage to Q2), the MotoGP field encountered the weekend’s first rain in FP4, ultimately topped by Marquez.

That shower was just a warning, as heavy rain soon followed, forcing Race Direction to postpone qualifying proceedings by over an hour. Q2 started at 4:30 p.m. and Marc was able to set a time that proved untouchable for his opponents, despite the fact that a tumble at turn four in the final minutes of the session prevented him from further improving. Dani ended the session in 10th place.

The unfavourable weather forecast for tomorrow afternoon prompted Race Direction to also reschedule Sunday’s proceedings, moving the Moto3 race up to 10 a.m., the Moto2 race to 11:20 a.m. and the MotoGP race to 1 p.m. local time.

“I think that being able to quickly adapt to sudden changes in track conditions is one of my strong points. Today I took advantage of that, even if, honestly, it wasn’t easy. It was the first time this weekend we rode in the wet, and we even crashed. But the feeling was there and we achieved the pole position, which is a good feeling even if we’ll ultimately start from the third row. The most important thing is that we made a huge step forward with the setup in dry conditions, and now I think we’re competitive. I also adapted my riding style a bit, and now we’re closer to the faster guys, who here are Dovizioso and Viñales. Now we’ll see which conditions we’ll have tomorrow, then we’ll try and make a good start and if possible we’ll fight for the podium.”

“Today we made a little step forward on the dry but still not enough to stay in the group who can fight for the victory. Then I struggled a lot in the wet with both medium and soft spec of tyres. I could not find any grip. That means that tomorrow we will start again from back on the grid and of course this is not good. We will see what the conditions will be at race time and what we can do form the start.”