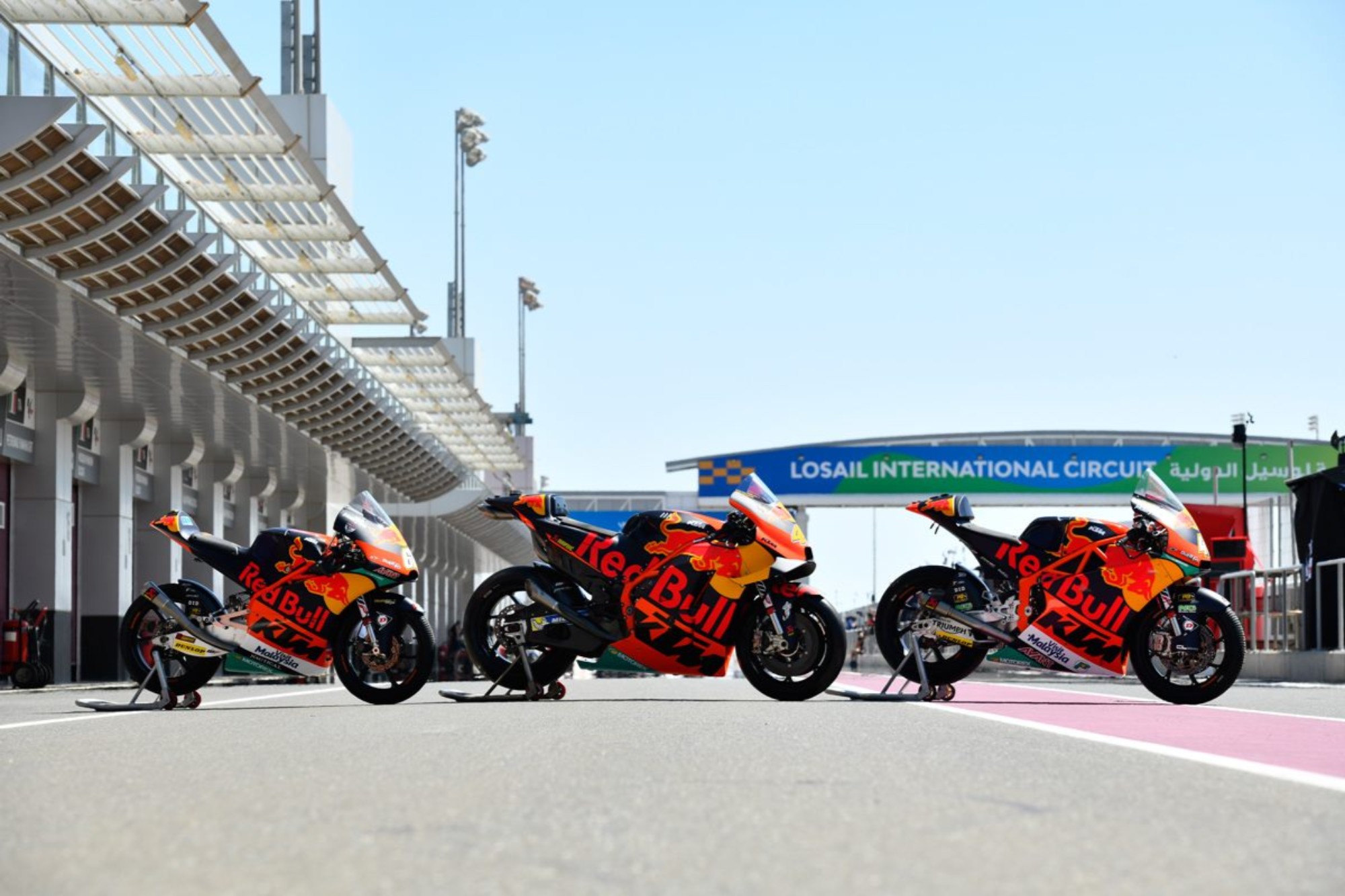 The recent launch of the Northern Talent Cup spread KTM’s influence wider into the foundations of road racing and further increased the credibility of the newest manufacturer to join the MotoGP entry list.

2019 represents the third season for KTM and their Red Bull-backed teams in MotoGP and in rapid time the KTM RC16 has sliced race deficits to Grand Prix-winning rivals substantially. The motorcycle, in the hands of Red Bull KTM’s Pol Espargaro, has already crested the MotoGP podium and continues to inch closer to repeating the distinction in the foreseeable future.

But while KTM may be relative ‘new guys’ to the premier class the factory has been accomplishing feats in Grand Prix and feeding elite talent into the upper echelons of the sport for almost two decades. Firstly their supply of RC 250 R machinery to the Red Bull MotoGP Rookies Cup from 2012 (previously providing 125cc two-stroke motorcycles from 2007) has helped over 180 riders from more than 30 countries sample the high-profile series on international FIM World Championship spec circuits and twenty of the alumni are currently competing in either Moto3, Moto2 or MotoGP.

The ‘Rookies’ contest has amassed over 150 races in 13 seasons and is still the pinnacle ‘feeder’ into Moto3. The very first champion, Johann Zarco, is Red Bull KTM’s third representative in MotoGP.

KTM previously excelled in the old 125cc and 250cc divisions between 2003-2008 where their two-stroke technology helped athletes like Casey Stoner and Marc Marquez to the initial chequered flags of their careers. In their first entry to Moto3 in 2012 (after dipping out of 125s in 2009) KTM snared the title with their RC 250 GP in the hands of Sandro Cortese and have remained protagonists ever since with stars like Jack Miller, Miguel Oliveira and Brad Binder shining; the last two names being the first racers to make the full climb in KTM colours from the Red Bull MotoGP Rookies through the stages up into MotoGP and passing through the capable climes of long-term partners Red Bull KTM Ajo.

The ‘ladder’ was made complete with Moto2 (thanks again to the Ajo framework) and MotoGP participation in 2017: that same year was the ultimate milestone as KTM took two places on the premier class grid.

Less than two years on another landmark was dropped in the Grand Prix story thanks to the alliance with Red Bull KTM Tech3 for 2019. Partnership with one of the best satellite teams in the history of the sport permitted four RC16s to echo through the paddock and allow a significant acceleration in R&D and development. Amplification of the test team with KTM stalwart Mika Kallio and Dani Pedrosa accumulating essential non-race mileage was another noteworthy deed.

Now the Northern Talent Cup solidifies the base of the pyramid from 2020 (the initiative replaces the ADAC Junior Cup powered by KTM where the KTM RC390 Cup bike was used) and where the levels begin. The extremely competitive but also simplistic and functional KTM RC4R is the technical base in the newly established battle for northern and central Europe from next year. Moving up, the RC 250 R is run in the Red Bull MotoGP Rookies Cup and brings the bright and best young talent even closer to the tech of Grand Prix. By the time riders might consider FIM CEV Moto3 Junior World Championship and the last ‘examination’ before the FIM World Championship then they will already be very familiar with the KTM RC4 currently used by 15 racers in Moto3. The RC12 in Moto2 is steered by 9 athletes while the chosen few (4) have the RC16 at the peak of the sport: MotoGP.

KTM hold three titles in road racing (2012, 2013 and 2016 in Moto3 with Sandro Cortese, Maverick Viñales and Brad Binder respectively) that take a valuable place in the 302 already won in all FIM disciplines by the factory from Mattighofen. With the fresh investment into the Northern Talent Cup KTM have made another statement in their belief, passion and value towards prototype racing and their role in the future for years to come.

Pit Beirer, KTM Motorsports Director: “As we mentioned at the launch of the Northern Talent Cup in Sachsenring recently we are proud of what we have been able to contribute to the world of road racing so far and in normal KTM style, when we set our eyes on something we like to ‘go for it’. We already have a strong base thanks to the Red Bull MotoGP Rookies Cup but the Northern Talent Cup allows us to go even closer to the beginning for many riders who want to be racers, and for families that want to start the dream but wonder how to make it work. For us it means a truly great stretch down through the prototypes and to that base machinery that might let the Espargaros and Zarcos of tomorrow start their journey. For a company like us – that takes such a big pride in our racing – there is no better feeling than watching that progression and helping it happen.”

For the third year in a row the entire scope of KTM’s prototype efforts across the divisions will be in full evidence at the Red Bull Ring in Spielberg, Austria on August 9-11 for the myWorld MOTORRAD GRAND PRIX VON ÖSTERREICH.