MotoGP: KTM Commits To Being In World Championship Through 2026

MotoGP: KTM Commits To Being In World Championship Through 2026 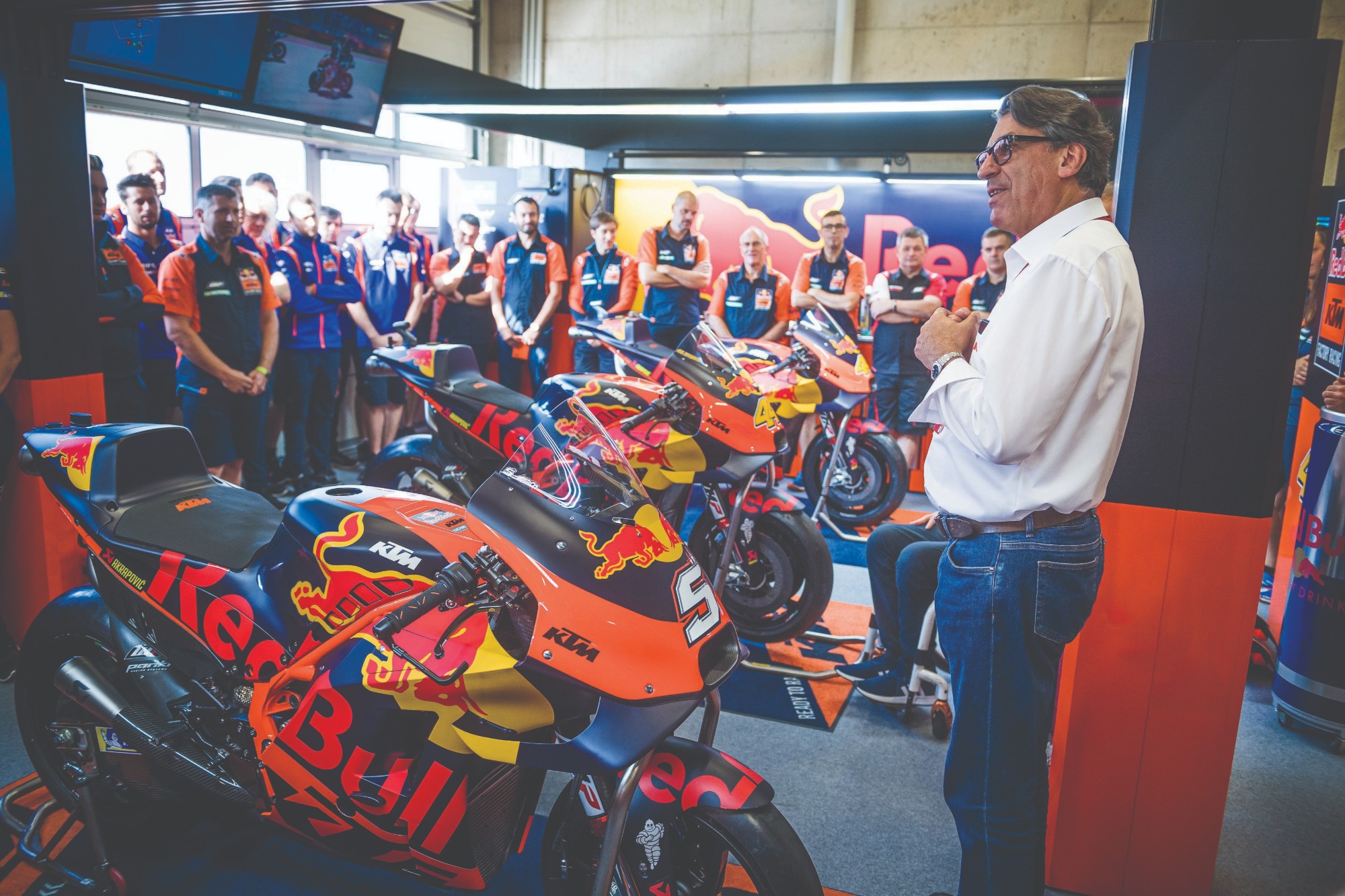 KTM AG announces a further five-year commitment to MotoGP racing, up until 2026, and will revise their priorities in the support classes from 2020 with refocused goals on Moto3 and reduced presence in Moto2. The Husqvarna brand will make a comeback with a dedicated Moto3 race team and new model.

KTM AG CEO Stefan Pierer and Dorna Sports CEO Carmelo Ezpeleta inked a fresh contract for KTM to remain as part of the MotoGP grid for another five years at the Red Bull Ring for the myWorld Motorrad Grand Prix von Österreich this weekend. The existing agreement will now extend to a total of seven years from the current campaign: KTM’s third as part of the high profile MotoGP series.

With the pledge to the pinnacle of Grand Prix racing confirmed, KTM have realigned their output in the support categories by placing principle emphasis on MotoGP and Moto3. Europe’s leading manufacturer will maintain their carefully constructed ‘road to MotoGP’ ladder from the new Northern Talent Cup (for 2020) and through the Red Bull MotoGP Rookies Cup and the subsequent divisions up until MotoGP but will reshape their perspective in the following two areas:

-Withdrawal as a chassis manufacturer in Moto2 but keeping the close relationship with Aki Ajo’s team as the crucial stepping-stone for Red Bull KTM in MotoGP.

-Further focus on Moto3 as the building block for Grand Prix talent to showcase and develop their potential. This includes a renewed effort with the return of Husqvarna to road racing. Adopting the KTM technical platform the brand was part of Moto3 in 2014 and 2015 and scored two podium results in the first season thanks to Danny Kent. The intention for 2020 is to develop a new Husqvarna race bike specifically for Moto3.

KTM continues to make promising gains in the MotoGP class where the quest for single-digit race results in the fiercely competitive contest remains on-track. The brand is a firm believer in the educational role of Moto3. The company’s young heritage started in the best possible way with the first two titles in 2012 (Sandro Cortese) and 2013 (Maverick Viñales) and another in 2016 with Brad Binder and KTM wishes to enforce this initial rung into Grand Prix racing.

Stefan Pierer, CEO KTM AG: “We made a proactive decision here at our home grand prix to renew our stay in MotoGP and commit to another five years of competition. This is part of a wider strategic view and we now have seven years to rise towards the top of the MotoGP class; the same period of time we needed to conquer the Dakar Rally. We know we are firmly on the way and have made good steps in less than three years already. As part of this outlook we want to boost Moto3: it is the foundation and the base of road racing for us. It is where we began and where we are one of the leading brands. We see a very good opportunity here by bringing back Husqvarna with force; there will be a new bike and a special direction with this project. All of this movement means we will pool our resources and energy and as a consequence we will step out of Moto2.”

Pit Beirer, KTM Motorsport Director: “First of all it is fantastic for us to continue to stay in ‘sixth gear’ as a company in MotoGP and to be able to keep pushing hard to achieve our goals. With our knowledge of more than three-hundred FIM world championships in so many classes we know the ingredients to have success in racing and we are determined not to move from our objective. For this I want to thank Mr Pierer and the KTM AG board for the extra vote of confidence and for all the hard work and belief that every single person who touches this project has made so far. Secondly we have looked at the entire programme and know that our effort has to be well placed, and we believe that MotoGP and Moto3 are the main platforms for us moving forwards. Thanks to the great work and experience with Aki we can maintain a link to Moto2 and the perhaps what is the final preparation needed for the jump to MotoGP. We feel strongly that we can have this asset even though we will vastly reduce our presence as a chassis contributor. We can feel the passion for MotoGP at places like Red Bull Ring this weekend and it allows us to feed off that energy. We believe that exciting times are coming for us as a racing division and as a company.”