​MotoGP: Jack Miller Says “It Was Like I Farted On The Grid” In Argentina

​MotoGP: Jack Miller Says “It Was Like I Farted On The Grid” In Argentina 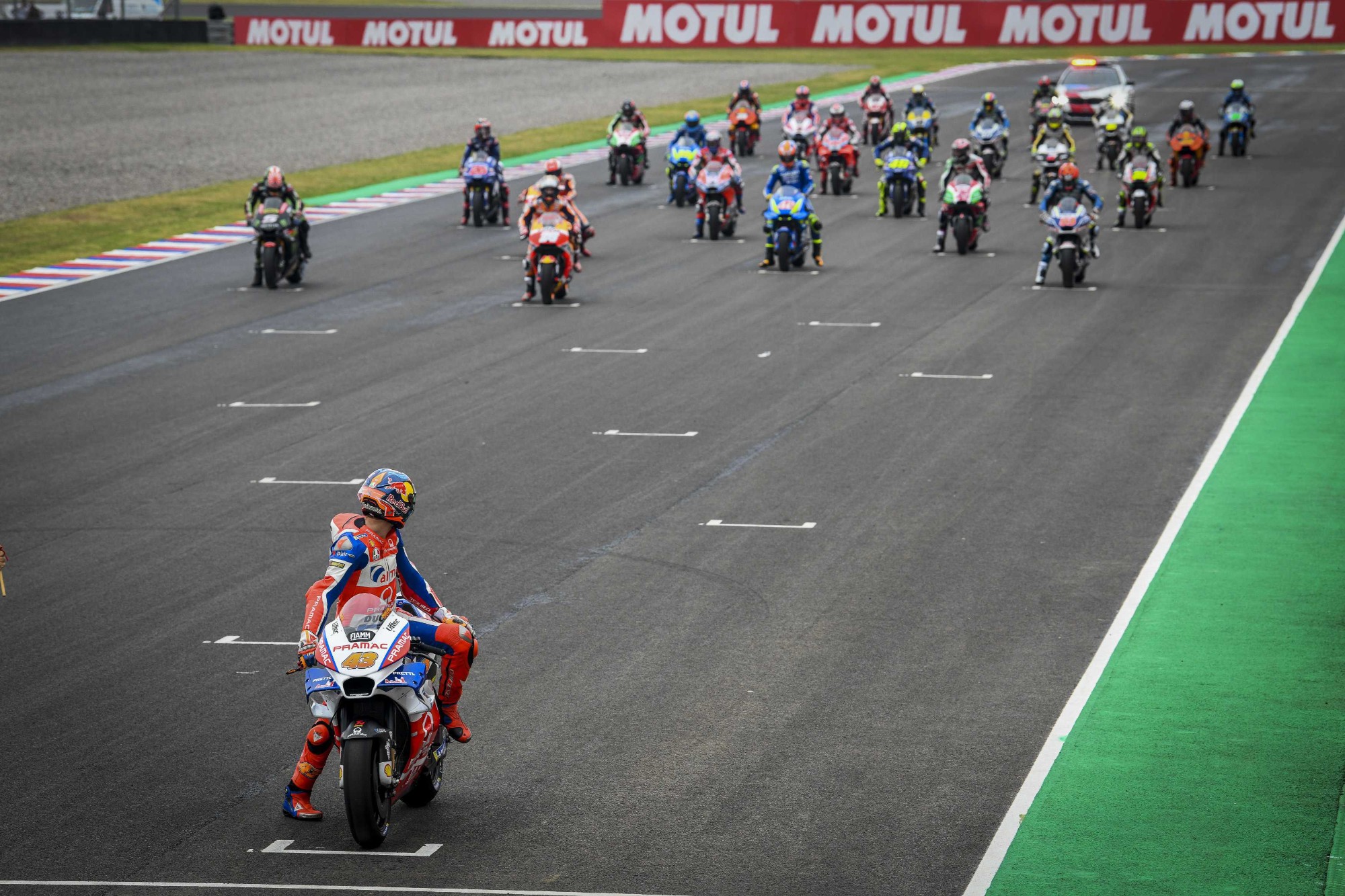 Love him or loathe him for his wild antics on the track, Australian MotoGP racer Jack Miller speaks without a filter when he’s asked a question, and that was clear to everyone in the Red Bull Grand Prix of The Americas pre-event press conference Thursday at Circuit of The Americas, in Austin, Texas.

Rather than asking about the upcoming event in Texas, most of the journalists’ questions centered around the wild and controversial MotoGP race two weeks ago in Argentina. There, Miller earned his career-first MotoGP pole position with an incredible lap using slicks on his Alma Pramac Ducati GP17 on a half-wet/half-dry track.

Miller then backed that up with a brave decision to choose slicks for the anticipated start of the race in spite of rain right before the race. The race start was then delayed so the rest of the grid could switch to slicks after the sighting lap, a choice that is usually met with having to start from pit lane. But rather than have 23 riders start from pit lane, Race Direction opted to have the 23 riders who switched tires or bikes line up five rows behind Miller.

Miller was leading or fighting for the lead for most of the race, right up until a small mistake in the closing stages resulted in him dropping back to an eventual fourth-place finish.

Asked if he came away from the race feeling frustrated, Miller said, “Yeah, frustrated, but semi-satisfied as well. With my past record in previous years I probably wouldn’t have even made it past the first lap with that much pressure on my shoulders, sitting there alone on the grid for 35 minutes.

“It was a positive weekend, in general, for us in Argentina. We have the feeling back that I had in the Thailand test and also the Malaysia test. Qatar, I sort of struggled through the test. We weren’t quite competitive there, but in Argentina — in both wet and dry conditions — we had pace.

“It was sort of a nerve-wracking race for me. I was at the front most of the time, apart from when Marc came by for a brief stint. I didn’t really understand what happened to him. He just sort of dived off, and I didn’t realize what it was for. I could sort of see that the boys were behind me for a long time. I tried to keep as cool as I could, but I just touched that little bit of wet in the last corner and it cost me the fight for the podium. I was kicking myself, for sure, throughout the week, but I feel I learned a lot from that race and also from the little bit of time I spent riding with the other boys.”

Asked if he thought it would be wrong for people to rule him out based on the risks that he’s obviously willing to take, Miller said, “I don’t know. It’s hard to say. I feel we got lucky there with the risks. Many, many times I’ve been on the other side of it. It was nice to have it work for once.

“I feel this year, as Dovi [Andrea Dovizioso] said, there’s so many guys with competitive bikes, and I feel like I have a competitive bike this year. So I feel we can’t [rule] out anybody on the grid, as we’ve seen already with the satellite teams winning races and satellite teams nearly dominating the podium last week. I think it’s pretty impressive and it’s going to get better as the year goes on.”

When the discussion turned to all of the rider-to-rider contact during the race at Argentina and how it should be handled in the Safety Commission meeting scheduled for Friday, Miller said, “I think they need to control it a little bit better, the fighting inside the paddock. We’re here to race motorcycles and we’re here to fight, but the fight should generally try to stay on track and not try to fight so much in the media. That is one of the clearest things.

“There are a lot of people coming, the journalists, especially, coming at you, trying to get you to say something to mess up, and I think it’s not the correct way. I understand everybody is looking for a great story and wants to get as many views as possible, but sometimes it’s not the right way and it’s also bending the truth and making other people look bad.

“The fighting, I think, should stay more on the track, and of course us riders need to be careful with what we say because words can be twisted, as we’ve seen many, many times before. A lot of things that are being said [that] maybe they don’t mean.”

Considering the mistakes that were made in Argentina — like Marc Marquez incorrectly being allowed to start from the grid after stalling his bike when he should have been pulled off the grid to start from pit lane, as per the regulations – Miller was asked if he thinks changes need to be made with MotoGP’s Race Direction.

“For me, Race Direction did the best thing that they could do under that circumstances,” said Miller. “I mean, it was like I farted on the grid and everyone disappeared. It was quite funny. It was like dominos – once one went, everyone went.

“Race Direction were put under intense pressure there, because as you’ve seen pit lane there in Argentina is not too big. It’s fine for general use and safety conditions, but if you have 23 bikes starting out of the pit lane it can be [chaos] out there.

“Yeah, we need to work on this maybe in the future. These conditions, they were so special how quickly the track dried and how everybody read the conditions. I went out and I took the gamble on the slicks, but I was riding on a hunch because Francesco [Guidotti, Alma Pramac Racing Team Manager] told me it was going to dry out. I didn’t really know. I guessed and I was lucky. The conditions and everything have to come into play.

“For safety conditions and for another race for example if somebody gambled on wet tires and everybody else was on slicks, then of course you want to have the chance to go to return to the back of the grid. So it’s hard to say.”

Asked what is the difference between his Ducati Desmosedici GP17 and the GP18 raced by Andrea Dovizioso, Jorge Lorenzo and Danilo Petrucci, Miller said, “The difference is they look more under control. I’m a little bit more wild [with] more moments. They are more consistent, for sure. At the moment, we are not on their level. For one or two laps we can run their pace, but as we’ve seen from Dovi in Qatar he ran a perfect race. He managed the race from start to finish.

“I saw him halfway through the race. He was just in front of me and I thought he was struggling, as I was, with the front tire, but he was playing cat [and mouse]. He went through the group, and he had that race by the balls.

“So I haven’t got anything for them. They are [doing] a really solid job on the GP18, Petrucci as well. It’s too early to tell if we can challenge them or if we can come close on the GP17, but we’re doing the best we can. As we saw last year, my bike is competitive. It won many races [in 2017], and I’m still not doing the same job [Dovi] did on it last year. So we need to do more.”