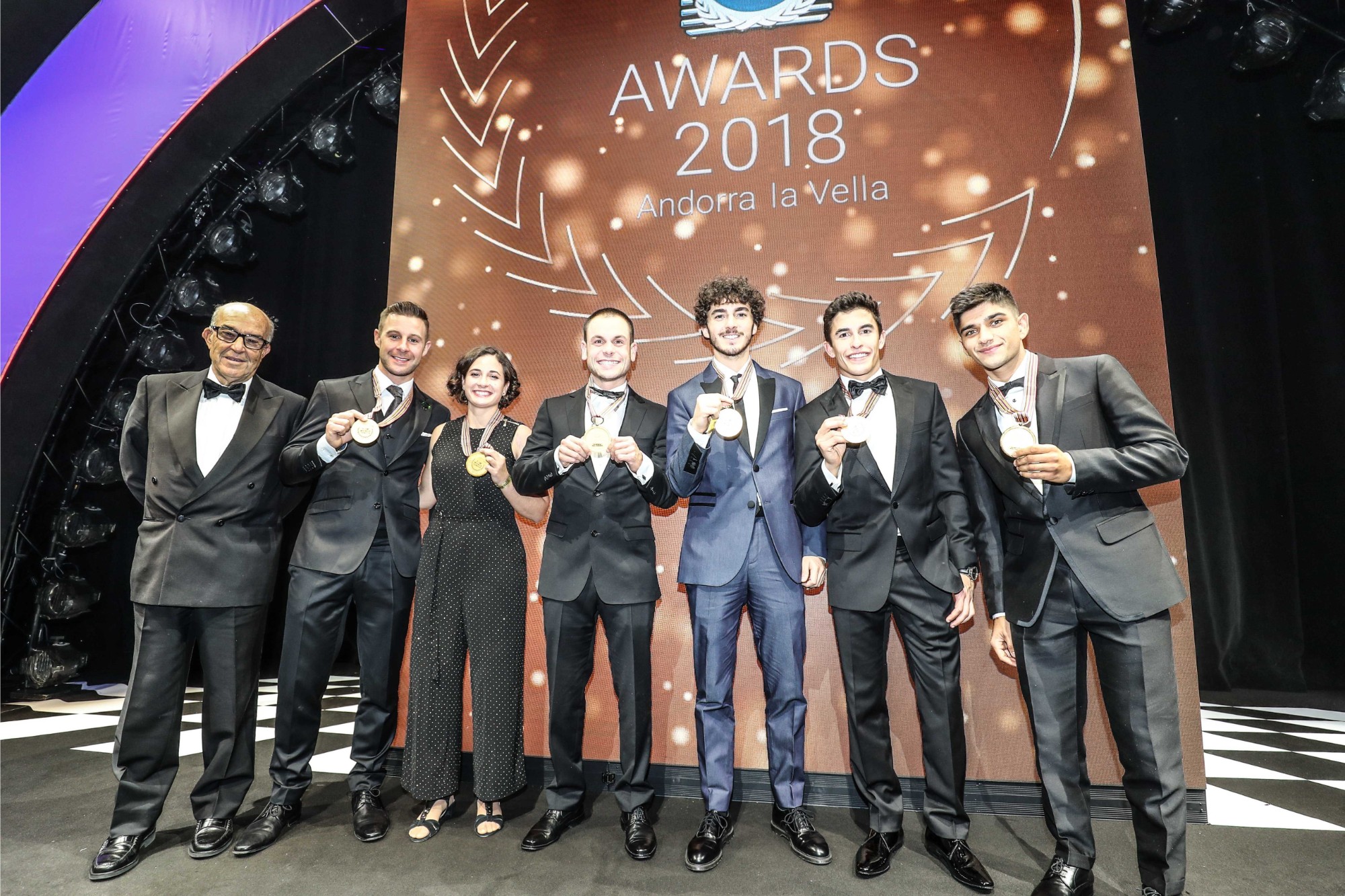 After another incredible season of racing, it was time for another incredible evening in Andorra La Vella as Europe’s highest capital city once again hosted the prestigious FIM Gala. Gathering together Champions from all disciplines on two wheels, more than 30 FIM World Champions were honoured in 2018 – including reigning and record-breaking MotoGP™ World Champion Marc Marquez (Repsol Honda Team).

Marquez is no stranger to the gala, winning five of the last six premier class crowns, and the Spaniard is now the youngest ever seven-time World Champion – adding another well-earned medal to the cabinet in 2018. He was joined at the gala by 2018 Moto2™ World Champion Francesco Bagnaia after his impressive year, and another record breaker in the form of Moto3™ World Champion Jorge Martin.

Raul Fernandez was also present to pick up his award for winning the FIM CEV Repsol Moto3™ Junior World Championship ahead of his full-time debut in Moto3™ on the world stage next season, having impressed to wrap up the crown ahead of the final weekend at the Circuit Ricardo Tormo in Valencia.

Amongst the many others present were WorldSBK Champion Jonathan Rea, who took a record-breaking fourth consecutive crown, 2018 WorldSSP Champion Sandro Cortese – a second visit for the 2012 Moto3™ World Champion – and the first ever solo female road racing Champion, WorldSSP300’s Ana Carrasco.

Dorna CEO Carmelo Ezpeleta also picked up an award on behalf of Dorna as the company was honoured with the all-new ‘FIM Award for the Future’, aimed at rewarding those who work to improve and develop the presence of youngsters in all motorcycling related activities. That was given in recognition of the incredible Road to MotoGP™ programme.

That brings the season to a close as the curtain comes down, with gazes now firmly fixed on the horizon as we switch from looking back at another historic year and begin to look forward to 2019. That fires up in Sepang for testing in early February for the likes of Marquez as he prepares to try and defend the crown, with the likes of Bagnaia and Martin facing a new challenge as they both graduate – the former to the premier class and the latter to the intermediate.

Marc Marquez: “It’s amazing to be here with everyone, I want to congratulate all these Champions. If we’re here we had a great season. And thanks to the team and all those kind of things, now back to the party! Try to enjoy it!”

Francesco Bagnaia: “I’ve been waiting for this moment for a long time and finally I reached it! And I want to thank the Team, Sky, the Academy, my family, my girlfriend and friends…and next year for sure I have my next objective and I’m really looking forward to it.”

Jorge Martin: “It means a lot to me, I want to thank my family and team and all the people who support me. I want to congratulate all the Champions because they know how difficult it is to be here – and I’ll work hard to be back here in the next few years!”

Carmelo Ezpeleta: “Thanks to the FIM and those who decided to give us this award. It is now 27 seasons we’ve been working with the FIM, with the national federations, with all the clubs. Special thanks to all the riders who have permitted us to grow during this time. From the beginning we thought it was important to create new strategies for people who maybe, without this programme, might not be able to participate. I’ve very proud to receive it in the name of Dorna, in the name of all the people who work at Dorna. And to receive this from Giacomo (Agostini), it’s an incredible honour for us to receive this from him.”

Set in the sporting arena Poliesportiu d’Andorra, 54 FIM World Champions were welcomed to celebrate the sensational year of racing action, as the 2018 season comes to a close. Hosting all champions crowned as well as FIM Team World Champions, every motorcycling discipline was recognized.

Beginning the celebrations with a signing session at Andorra Park Hotel in the Andorran hills, the champions then took to the red carpet before proudly receiving their medals in the ceremony in the arena.

History-maker and 2018 MOTUL FIM Superbike World Champion Jonathan Rea (Kawasaki Racing Team WorldSBK) collected his medal – for the fourth time in a row – in front of motorcycling racing’s elite. It was not only Rea collecting his medal, he was joined by FIM Supersport World Champion Sandro Cortese (Kallio Racing) who took the title in his rookie season in the final round at Losail International Circuit. One of the most notable champions attending the awards was FIM Supersport 300 World Champion Ana Carrasco (DS Junior Team), who became the first solo female to win a world title, crowned in dramatic style at Circuit de Nevers Magny-Cours.

Jonathan Rea (Kawasaki Racing Team WorldSBK): “Once again I’ve been incredibly proud to accept my FIM World Championship medal in front of all the other champions from various disciplines. It truly is the moment when what we have achieved starts to sink in. I want to thank all my team at KRT for all their support, my family and friends for their support.”

Finishing the celebrations of the history making 2018 season, thoughts are now turning to 2019 as WorldSBK will welcome new faces, new bikes and new races with plenty of changes heading for the series. Champions are preparing for the battle to defend their crowns, as they wait for the lights to go out on another season.