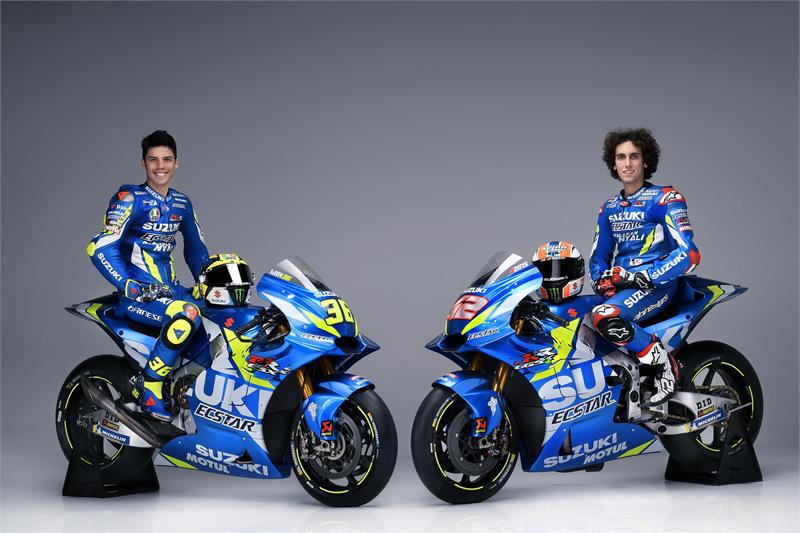 With the winter nearly over, Team SUZUKI ECSTAR is heading to Malaysia for the first test of 2019, with the debut of the final version of the livery that will characterise the two GSX-RR’s ridden by Alex Rins and Joan Mir.

The winter break has been very useful for preparing an advanced version of the technical package that will be available to the Factory Riders from the beginning of the season. With the main goal of finding increased power without losing traction, as well as improving the behaviour of the bike in corner entry and exit.

As already announced, the lineup will be composed of two young Spaniards, a choice designed to continue Suzuki’s philosophy of bringing on and growing young talent. With two seasons aboard the GSX-RR already, Alex Rins will be the “experienced” rider in the garage, having achieved 5 podiums during the 2018 season. He will have the clear target of getting to the top step of the podium as soon as possible.

Debutant Joan Mir has already proven that he is not daunted by the top class, showing solid performances in the November tests in Valencia and Jerez. He can rely on a solid team around him, who have plenty of experience in managing young riders. And with no pressure on his shoulders, this year will be a learning phase in his partnership with Team SUZUKI ECSTAR.

“We are approaching the true beginning of this new season with renewed enthusiasm and positivity. The tests at the end of last year gave us important direction, and my expectation is to find ourselves at a competitive level. We have been working on many aspects of the GSX-RR and with the contribution of all our riders – Rins, Mir and the test rider Guintoli – we have been able to improve our technical package. For us, 2019 will be an important season: from one side we will have Alex Rins, who is still young in terms of age but is already experienced with our team and our machine, he has the tools to take the victory we long for. On the other hand we’ll start a new training programme with a young talent in the form of Joan Mir, with no pressure on him and all our efforts going towards his development. Last year we have also reinforced our test team and Guintoli is a true part of the squad who can give us important feedback, without forgetting the hard work done behind the scenes by Japanese test riders in Hamamatsu. I’d say we have a good and solid set up as a team, and we hope for a positive 2019 season.”

“After the end of last season we had clear ideas on what we needed to improve in our package and performances, all our riders gave us pretty much the same requests, feedback, and directions and we have now finalised a package that will hopefully prove to be effective. We have developed a new spec engine, a new spec chassis, and we’ve made some improvements in the electronics and also in the fairing. This is in line with Suzuki’s philosophy -- which is not to destroy and rebuild from nothing, but to continue to grow step by step on what we have already achieved. For us the rideability of the bike is a must, and on that basis we’ve tried to improve every area of the bike without compromising the overall balance.”

“We are about to start an interesting season. Last year we surprised everybody with our progress and a quick come back to the podium positions. Having Alex Rins continue with us is very important when trying to improve our team performances. He has the mental freshness of the young guys, but also the consistency and wise head from his experiences of the two last years. This has been further cemented by the good results he achieved in 2018, with a great end to the season. He has already demonstrated his talent and now we have to work hard to take the next step with him, being very much aware of how strong our competitors are too. In addition, we’re starting a project with Joan Mir, the newcomer who will make his debut in the top class. This is the third time we’ve taken on a rookie, and we will work hard to continue the positive trend we’ve had with bringing on young riders. We strongly believe that he has great talent, and it’s up to the team now to bring out all his potential with the Suzuki GSX-RR.”

“Finally winter is over and I can go back riding! This winter break has felt so long and I can’t wait to be back riding again. After the last test in November I left clear feedback for the engineers to work on, as far as I know the improvements we will try in Sepang will not be drastic but many small improvements in many areas, which is totally the Suzuki philosophy. We know what we were missing on the bike, so I believe the R&D in Japan will deliver a package which will help us to improve further. My winter has been very intense, with successful recovery and intense training programme. This is an important year, because in 2018 we were able to show that we can consistently fight for podium positions, and now it’s time to go for the bigger prize: the victory.”

“Needless to say, I am very excited to get back on my bike. This winter has been very long without riding but I focused on my physical training, which has given positive results so far. Of course I still need many more hours on the bike, there are so many things I still need to understand to be even more effective, but I feel very supported by the team and I will rely on their wealth of experience to improve, and also to contribute my own improvements to my bike. It will be a whole package, me and the bike, that will hopefully develop step by step. I don’t have any pressure, but for sure my clear objective will be to end the season with a smaller gap to the winner when compared to the first race.”