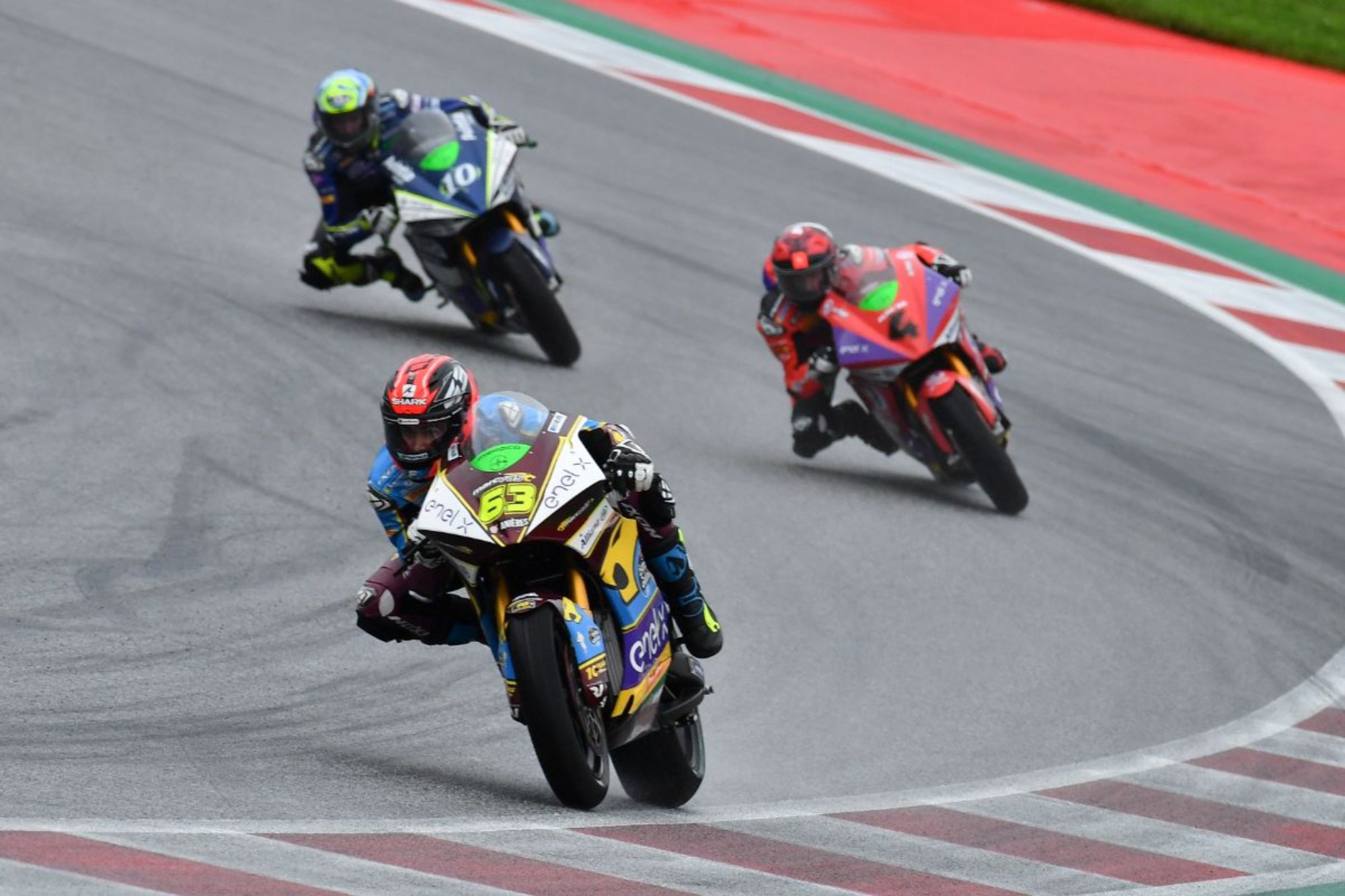 Championship Point Standings (after 2 of 6 races):

Mike Di Meglio (EG 0,0 Marc VDS) took an impressive victory in Round 2 of the FIM Enel MotoE™ World Cup, with the grid going racing in wet conditions for the first time ever and the Frenchman perfectly composed to come home for 25 points and the Championship lead. Xavier Simeon (Avintia Esponsorama Racing) took second after a big squabble to decide the podium, with Bradley Smith (One Energy Racing) crossing the line in third.

The race was reduced to five laps due to rain falling at the Red Bull Ring, with no practice time in the conditions meaning the grid were given two sighting laps and the race distance was reduced. After that extra lap to judge the conditions before lights out, the scene was set and Round 2 got underway.

As the grid thundered into Turn 1 it was Simeon who braved it out to take the holeshot from second on the grid, but the Belgian was forced to cede the lead soon after as Di Meglio retaliated into Turn 3. The fight for third just behind them was immediately heating up as well, with a gaggle of riders all blasting towards Turn 3 in tandem and Eric Granado (Avintia Esponsorama Racing) coming out on top.

That’s when the first bit of drama hit as previous points leader Niki Tuuli (Ajo MotoE) ran wide into Turn 4, the Finn managing to keep it upright in the gravel trap and rejoin but right at the back, facing an almighty uphill struggle to take points. Smith also had a moment into Turn 4, but the Brit only slipped down to ninth and stayed on.

Ninth was where Granado started, but he’d quickly shot through into the fight at the front and momentarily took second away from teammate Simeon, but a big moment for the Brazilian then saw the Belgian strike back. Granado, of course, repaid the favour once again, and this time the number 51 was able to keep it and start to home in on Di Meglio for the lead.

Once through and at the front, Granado seemed to have an edge in the tough conditions and set about starting to break away from the pack…but then disaster struck. On lap three and on the brakes into Turn 3, the Brazilian suddenly lost the front and slid out of contention, leaving Di Meglio back in the driving seat with a little breathing space included.

However, as comfortable as it looked initially, Tech 3 E-Racing’s Hector Garzo was on a charge. He’d managed to out-duel Simeon after going quite literally elbow to elbow in the fight for second, the Spaniard rolling around the outside into Turn 9, and with just two laps left, Garzo set his sights on Di Meglio a second ahead of him.

The Spaniard was gaining seemingly corner by corner and had cut the gap in half by the final lap, but that’s when disaster struck. After getting so close, Garzo suddenly crashed out at Turn 4as Di Meglio started to turn the screw again, leaving the Frenchman in clear air to take a composed win – his first in this paddock for just over ten years.

That put Simeon in second place for a first MotoE™ podium, whilst Smith had fought his way through to fourth after his early error, ultimately crossing the line third after the drama ahead of him. That keeps him only five points off the lead with his podium – the same gap he arrived with, just behind a different rider.

Alex De Angelis (Octo Pramac MotoE) took fourth, a tenth clear of compatriot Matteo Ferrari (Trentino Gresini MotoE). A best ride of the season from Sete Gibernau (Join Contracts Pons 40) saw the former MotoGP™ star battle his way through from twelfth on the grid to sixth. Josh Hook (Octo Pramac MotoE) took seventh, ahead of Niccolo Canepa (LCR E-Team). Jesko Raffin (Dynavolt Intact GP) was given a penalty for passing under yellow flags and was demoted a place to ninth, ahead of Lorenzo Savadori (Trentino Gresini MotoE), who completed the top ten.

Round 1 winner Niki Tuuli managed to fight his way back to score a point, and every point is crucial in a six-race series. The FIM Enel MotoE™ World Cup is next in action at the San Marino Grand Prix in Misano, with a double header sure to shake up the fight even further – and 50 points on the table.

Mike Di Meglio: “It was quite a perfect weekend for me, I’m really happy and thanks to my EG 0,0 Marc VDS team, we did great work. Five minutes before going to the grid it was looking like drier conditions and not rain, and on the two sighting laps I saw I had a good feeling on the bike. So I though ‘OK, you try to stay on your pace’. But when Xavier passed me at the first corner I was able to pass him back quickly, then after that Granado arrived and I remember in Jerez he was very fast, like he was riding in dry conditions. So I was quite comfortable behind him, and after he made a mistake and I already had a gap to the other guys. On the last lap I saw Garzo was there and tried to brake as late as possible, hoping he’d make a mistake, and I saw he did, I don’t know if he went straight on or crashed? But I’m very happy about the win and we need to continue like this.”

The second race in the history of the FIM Enel MotoE World Cup was an outstanding show, with the Energica Ego Corsa machines showing all their power grip on the strip of asphalt of the Red Bull Ring, which was made wet by overnight and early morning rain showers. Saturday’s E-Pole winner Mike Di Meglio kept up the momentum by taking his first MotoE win – and the leadership in the standings – ahead of Xavier Simeon (Avintia Esponsorama) and Bradley Smith (One Energy Racing).

Di Meglio had a great start from pole position but was soon overtaken by Simeon, who then gave the lead back to the Frenchman after a small mistake. The race saw the first drama unfolding on lap one, when race one winner Niki Tuuli (Ajo MotoE) went wide and onto the gravel, a mistake that relegated him at the back of the field and cost him the championship lead.

The man on the move in the early part of the encounter was Eric Granado (Avintia Esponsorama), who had the better of his teammate Simeon and then took control of the race at the exit of turn three by powering his Energica Ego Corsa past Di Meglio on the second lap. Meanwhile, Alex De Angelis (OCTO Pramac MotoE) went a little wide at the next corner and lost two positions to Matteo Ferrari (Team Trentino Gresini MotoE) and Hector Garzo (Tech 3 E-Racing).

While trying to pull away from the chasing pack, race-simulation winner Granado lost the front under braking at turn three, a massive blow for the young Brazilian rider which put Di Meglio back in the lead with a good margin over the following duo. But the fastest-ever MotoE rider around the Red Bull Ring, Garzo, had no intention of letting the Marc VDS rider pull away. After a spectacular pass around the outside of Simeon, Eric began a relentless chase for the win aboard Tech 3’s Ego Corsa.

Unfortunately for him, dreams of gold were shattered on the last lap when, after setting the fastest lap of the race, he crashed out of contention. With no other rivals close, Di Meglio crossed the line a lonely winner ahead of Simeon and Smith, in what was a repeat of yesterday’s E-Pole top-3. After a brace of difficult opening laps, the Briton picked up the pace and made his way back to the podium after an intense battle with MotoGP legend Sete Gibernau (Join Contract Pons 40), who was sixth at the end of the race behind De Angelis and Ferrari.

The FIM Enel MotoE World Cup will resume action in a month’s time at the Misano World Circuit, with two races scheduled over the weekend and therefore 50 points up for grabs. Energica’s home race will be full of activities and initiatives, so please make sure to stay tuned on Energica’s social media channels and visit www.energicamotor.com for more news.