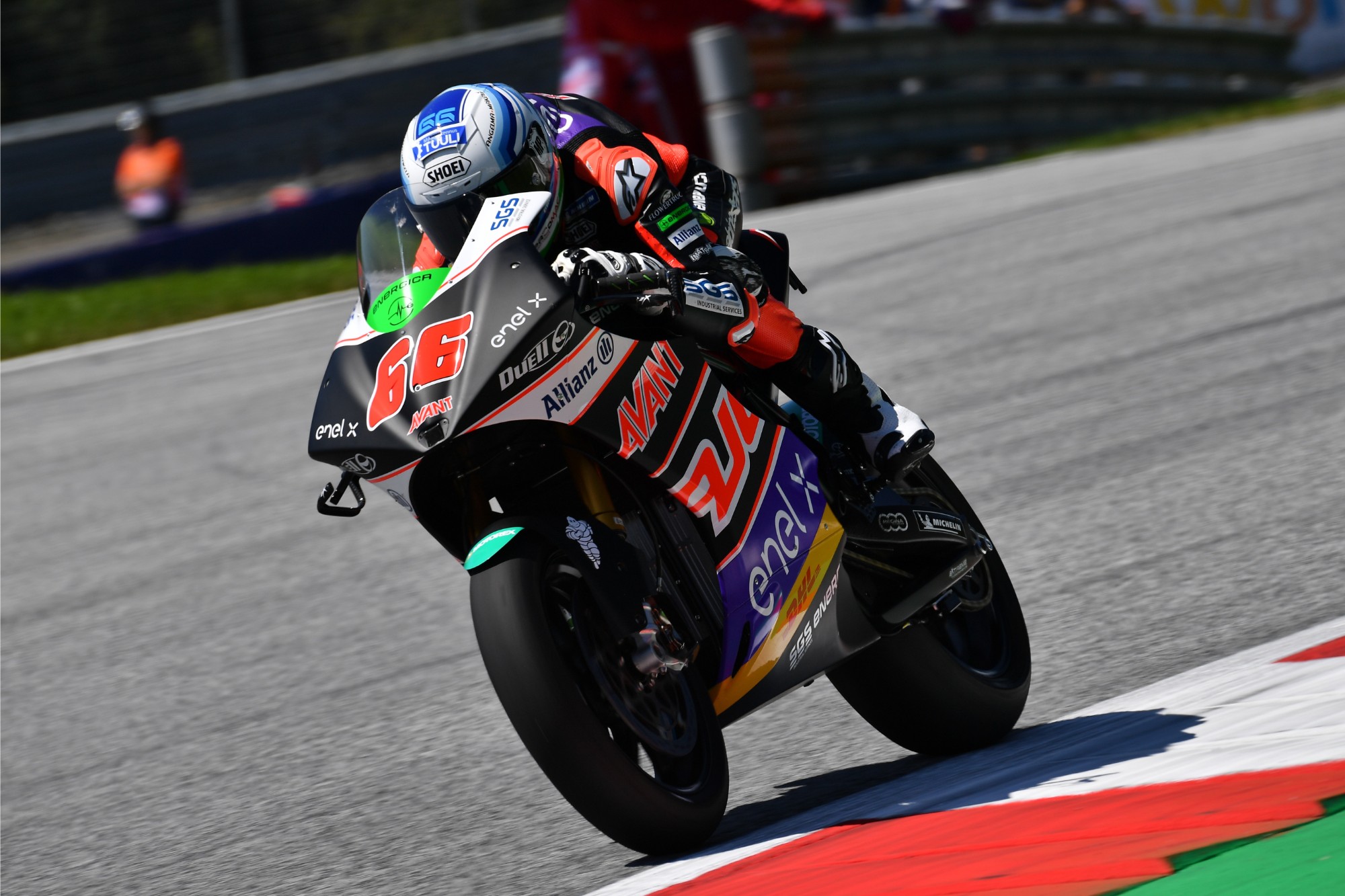 Smith began the day as Tuuli’s closest challenger in the Championship and remained so as the top two ended FP1 at the top of the standings. However, no one could live with Tuuli’s FP2 pace as the Finn set a 1:35.225 on his third flying lap, his advantage remaining above half a second for most of the 30-minute session. Casadei finished fourth in FP1 but the Italian was able to find a couple of tenths in the evening sun to jump to second overall, with Smith improving by only just under a tenth and therefore slipping down a spot to third.

Hector Garzo (Tech 3 E-Racing) was a big improver in FP2 to leap up to fourth from 10th in FP1, the Spaniard managing to find almost a second to sit 0.038 behind the number 38 on Day 1. Xavier Simeon (Avintia Esponsorama Racing) closed out the top five in the combined standings – just as he did in FP1.

Another headline on Day 1 was an incident ahead of FP2 as a fire broke out, with an investigation currently underway to determine the reasons behind it. The incident involved the bike of standings leader Tuuli, but the fire was immediately and safely extinguished by the fire department. MotoE™ action did and will continue as scheduled.

The Red Bull Ring welcomed the FIM Enel MotoE World Cup for the second round of the first-ever edition of the series, with the 18 riders of 12 teams battling out on track in the two, 30-minute free practice sessions aboard their Energica Ego Corsa machines.

And just like one month ago, it was Niki Tuuli (Ajo MotoE) who set the pace on the much-faster and sweeping 4.3 km circuit located near the town of Spielberg in Austria. The young Finn ultimately set a blistering 1’35.225secs lap-time to top the timesheets and impose his dominance once again.

But the difference maker today was without a doubt Mattia Casadei (Ongetta SIC58 SquadraCorse), who was always near the front and managed to edge the much more experienced Bradley Smith (One Energy Racing) by only a thousandth of a second, with Hector Garzo (Tech 3 E-Racing) and Xavier Simeon (Avintia Esponsorama Racing) right behind in fourth and fifth, respectively.

Podium finisher at Sachsenring Mike Di Meglio (EG 0,0 Marc VDS) was the first of five riders unable to improve on their morning times and that resulted in a three-position drop for the Frenchman between sessions one and two.

An investigation is currently underway to determine the reasons behind the fire that broke out today at the Red Bull Ring in Austria, where the second round of the FIM Enel MotoE World Cup is currently taking place. The incident involved bike #66 of Niki Tuuli. The fire was immediately extinguished by the fire department and the action was performed in complete safety.

MotoE action will resume tomorrow morning with the new, 20-minute FP3 session which will begin at 8:30am local time (GMT+2).