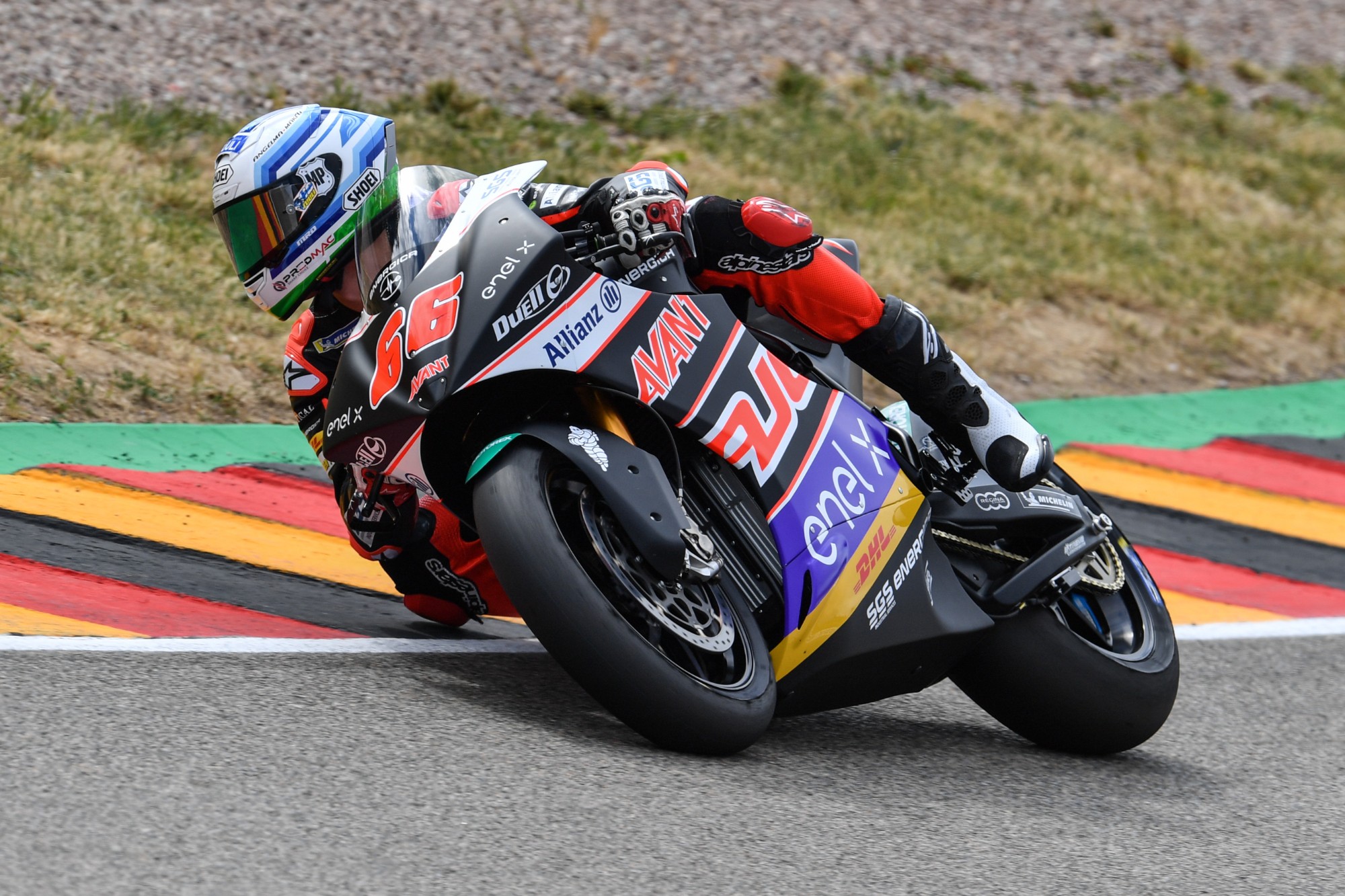 The first-ever E-Pole took place today at the Sachsenring under sunny skies and in mild temperatures, and it was a great show. All eighteen riders had one single opportunity to put their best lap together, in what was a reminiscence of the old-school WorldSBK Superpole, aboard their stunning Energica Ego Corsa machines. While the top-three was in line with the results of the official Valencia test, there were also some surprises in store.

If there was a stand out rider today, it was Niki Tuuli. The Finn, riding for his compatriot Ajo MotoE Team, was the penultimate rider to get on track and with a brave and wild performance he managed to raise the bar to a whole new level by diving under the 1’28secs barrier for the first time, ultimately logging 1’27.456secs. Tuuli thus enters the history books of motorcycle racing as the first rider to claim pole position in the FIM Enel MotoE World Cup by mastering the Ego Corsa in spectacular fashion around the challenging German circuit.

Joining Tuuli on the first row in tomorrow’s 8-lap race will be Tech3 E-Racing’s Hector Garzo (+0.787) and Avintia Esponsorama’s Eric Granado (+0.798), who had shared both the front row and the “simulation podium” with Tuuli back in Valencia.

There was disappointment for both home rider Jesko Raffin (Dynavolt IntactGP) and María Herrera (OpenBank Angel Nieto), whose quick laps were halted by Race Direction due to entering the track when the Pit-Lane was still closed (Black Flag).

Niki Tuuli (Ajo MotoE) stole the show to become the first ever FIM Enel MotoE™ World Cup E-Pole sitter at the HJC Helmets Motorrad Grand Prix Deutschland, the only man in the 1:27s after setting a 1:27.456 to end the session nearly eight tenths clear of the competition. That competition comes from Hector Garzo (Tech 3 E-Racing) in second and Eric Granado (Avinita Esponsorama Racing) in third, with the two split by just 0.011 as they once again showed their impressive pace in the new Cup.

It was a historic day at the Sachsenring as the first ever E-Pole session got underway, with riders getting only one shot at a fast lap. Everything rests on one out-lap, one flying lap and one in-lap, and some familiar names are on the front row. But right behind them it was Friday’s fastest Mike Di Meglio (EG 0,0 Marc VDS) who took P4, only 0.005 ahead of a huge improvement in laptime from Xavier Simeon (Avintia Esponsorama Racing) in fifth as the Belgian rider cut more than a second off his fastest lap from Friday. Matteo Ferrari (Trentino Gresini MotoE) locks out Row 2.

Bradley Smith (One Energy Racing) spearheads the third row in seventh after ending the session 0.066 off Ferrari, with Nico Terol (Openback Angel Nieto Team) a tenth behind him and the two joined on the row by Alex De Angelis (Octo Pramac MotoE). Mattia Casadei (Ongetta SIC58 Squadra Corse) completes the top ten, getting the better of Lorenzo Savadori (Trentino Gresini MotoE) by just half a tenth.

Maria Herrera (Openbank Angel Nieto Team) was black flagged for leaving pitlane too early and sadly missed the chance to set a lap, with Jesko Raffin (Dynavolt Intact GP) later doing the opposite and missing his window. Raffin will start ahead of Herrera but both at the back of the grid.

With some riders out of position and some riders seeming to see it click in qualifying, the first ever race is going to be a stunner. Will the pack catch Tuuli when the lights go out and the points come into play? Find out at 10:00 local time (GMT +2) as the FIM Enel MotoE™ World Cup makes history.