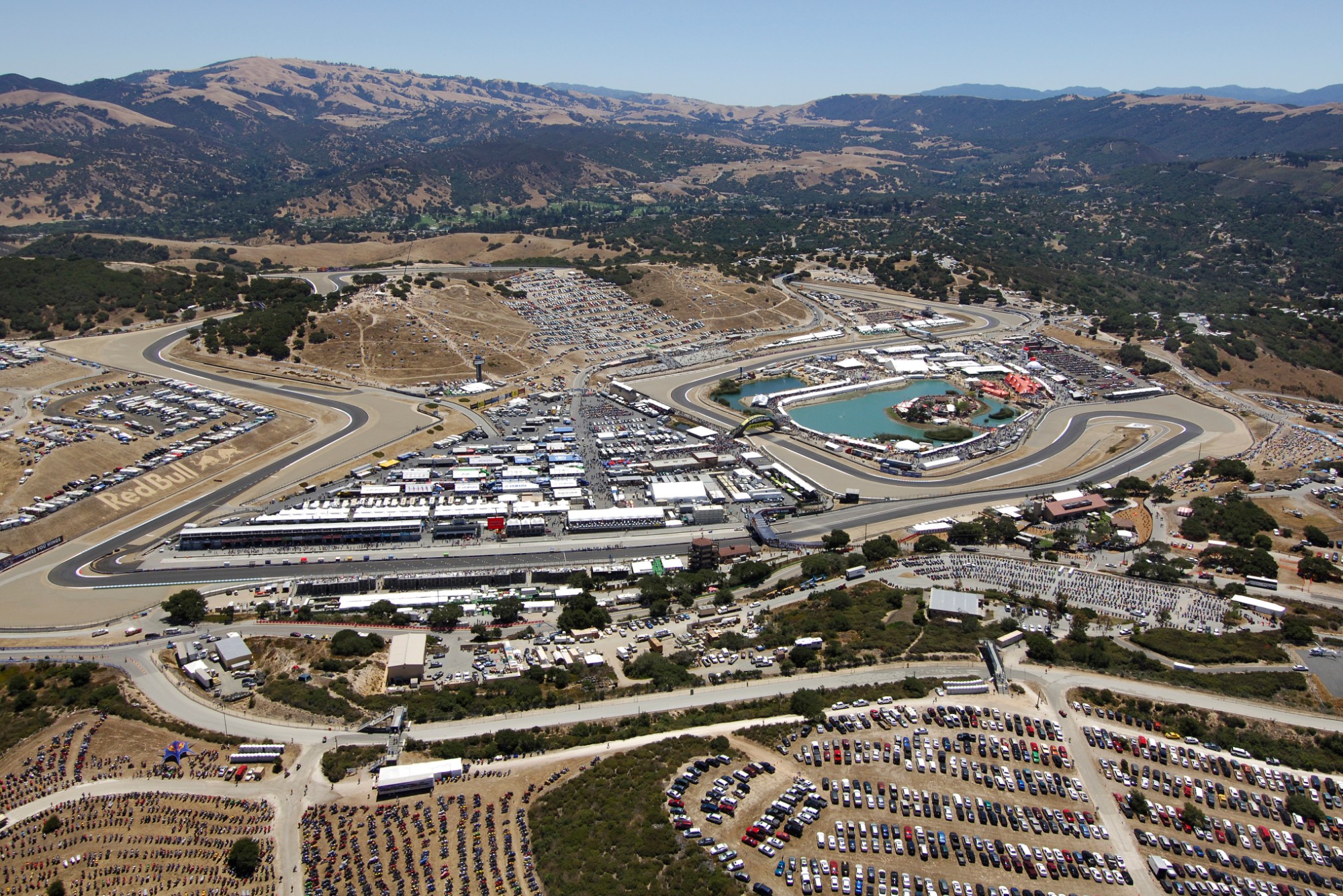 Championship Point Standings (after 12 of 20 races): 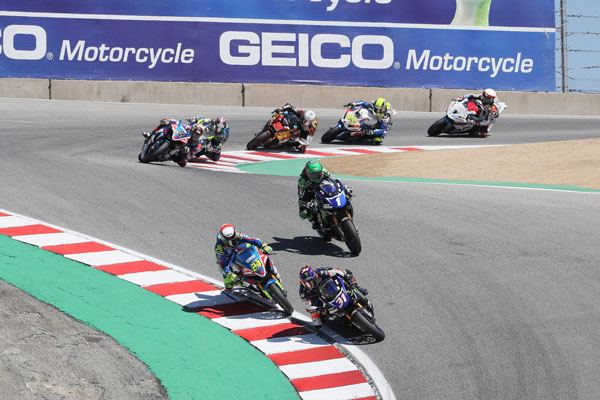 MONTEREY, CA (July 14, 2019)– Garrett Gerloff fulfilled a life-long dream today in the Championship of Monterey, the 23-year-old Texan winning the first MotoAmerica Superbike race of his career in front of a record crowd at WeatherTech Raceway Laguna Seca.

In what was his 32nd career Superbike race in his sophomore season in the class, Gerloff was dominant. The two-time Supersport Champion was second off the start behind Toni Elias, made the pass early, and was never headed, pulling away to a 4.449 second win.

With Gerloff, who earned his second career Superbike pole position on Saturday, riding off into the sunset, the battle for second was just that. A battle. The protagonists were Yoshimura Suzuki’s Toni Elias and Gerloff’s Monster Energy/Yamalube/Yamaha Factory Racing teammate Cameron Beaubier and the pair exchanged body blows to the bitter end with Elias coming out on top by just .326 of a second after 23 laps of the 2.2-mile WeatherTech Raceway Laguna Seca.

“It feels so good,” Gerloff said. “I was telling the TV earlier, I know it’s just a race win and these guys get wins all the time and I used to, but I haven’t for a while. There’s been a lot of emotions the past year and a half, getting used to the Superbike and everything. These guys haul ass everywhere. It’s tough, stiff competition out there. It’s been a long road. There’s been a lot of ups and downs. To finally get it and to do it here even more in front of the World Superbike guys and everything, it’s just something that I’ve wanted for so long, something that’s been on my bucket list forever. When I started racing, I was watching the MotoAmerica guys, AMA guys back in the day. That was one of the things that I wanted to accomplish in my life. To finally say that I got just one win, it just feels awesome. I’m ecstatic, for sure.”

The second-place finish for Elias may not have been a win on the day, but it was as far as the championship goes as he now leads Beaubier by 39 points, 246-207. Gerloff, meanwhile, is third in the series standings with 181 points after his first career Superbike victory.

“Congratulations for Garrett,” Elias said. “The first one is very special, and in Laguna Seca it’s amazing. I’m not happy about today. I’m kind of pissed off. Nothing came as I was struggling today. I made a couple of changes. The bike this morning was feeling so great, much better than yesterday in cold conditions but when the races start, I was losing the rear, the front. Mistake with the setup today, but it’s okay. We tried to manage the situation. My strategy didn’t work, too. I was thinking that I was able to catch Garrett, but it was impossible. Also, I had a false neutral, like last year. We didn’t have this problem in all this season, but sometimes happen and it happened today. But my team is giving me everything they can. They are working so, so good. We are in a good situation. Always it’s him. Always it’s Cam (Beaubier). When Cam is there, he’s right behind me. Unfortunately, we fight each other and I’m just trying to open the gap little by little, but it’s difficult to open the gap. Difficult not to do mistakes. Like Road America in the last corner. So, let’s continue like this. It’s going to be so difficult, so long. Anything can happen. Try to win the most races as possible. If not, second as today is good. Five points more. It’s good for the championship. I’m happy for leading a little bit more. I had some extra, but let’s continue.”

Beaubier was third for the second day in a row after controlling most of practice and qualifying.

“Yeah, that was a tough one,” Beaubier said. “That was a tough pill to swallow. Yesterday was a pretty frustrating race. Last night we went over some stuff. Made some good changes. I was feeling really confident, really good going into today’s race. Just didn’t pan out like I wanted to. Hats off to my teammate, Garrett. He rode incredible. I know exactly how that feels. I wish I was up there dicing with him. Had a really tough battle with Josh (Herrin) and Toni, and I felt like us roughing each other up just let that gap open pretty quick. There was no way we were closing it. Like I said, I was pretty damn frustrated coming off the track. I was pretty heated, especially getting beat by Toni there at the end. But Garrett put me in a good mood, seeing how happy he was. I’m just really happy for him. I got an amazing support system. Just want to thank everybody for their support. Thanks all the fans for coming out. And we’ll move onto Sonoma.”

Fourth place went Elias’ Yoshimura Suzuki teammate Josh Herrin, the Georgian in the mix for second place early in the race before fading back to the clutches of Attack Performance Estenson Racing’s JD Beach, the Kentuckian beaten up from a morning crash in the first of two World Superbike races on Sunday. Herrin was able to beat Beach to the line by some two seconds.

To wrap up the weekend, the Supersport class took to the track for their one scheduled race at the MotoAmerica Championship of Monterey, and it was a good one, especially for M4 ECSTAR Suzuki’s Bobby Fong. The California rider got a great jump off the front row at the start, and also got the holeshot over Rickdiculous Racing Yamaha rider Hayden Gillim. Fong was never headed in the race, and Gillim ultimately crashed out unhurt, which contributed to Fong taking the victory over second-place finisher PJ Jacobsen aboard the Celtic HSBK Racing Yamaha and 2 Wheel Legal – Hudson Motorcycles Yamaha rider Richie Escalante in third. The win vaulted Fong into the Supersport Championship lead with an 18-point advantage over Gillim in second.

After his third Supersport victory of the season, Fong said, “On my pitboard, I saw plus zero. I never knew I had a one-second gap, so I just kept on pushing. Honestly, I was making quite a few mistakes and going a little bit slower than I felt like I should have been. My guys gave me the chill board, and I had to back it down a little bit. I came back around and then I saw the plus two and I was like, ‘Okay, we’ve got a little cushion.’ I don’t know what happened. I try not to look back really when I’m racing. I just ran consistent pace the whole time and just raced my board, basically. It was good. My guys were on it with the board today. I’ve got to give it up to them. It was a short weekend for us. We didn’t have much track time. The first two sessions we were kind of all over the place but thank God I’ve got a good crew and they figured it out overnight. We made some good changes for today’s race, and it paid off.”

Sunday’s Liqui Moly Junior Cup race was another dominant performance by Ninja400R.com/Norton Motorsports/Dr. Farr Kawasaki rider Rocco Landers, who started from the pole and led from start to finish to notch his seventh win out of nine races so far this year.

The order of finish for the other two podium finishers was hotly contested between Quarterley Racing/On Track Development Kawasaki’s Dallas Daniels and Altus Motorsports Kawasaki’s Kevin Olmedo. The two riders diced back and forth throughout most of the race, and Olmedo made a brave move on Daniels coming into the last turn on the final lap of the 12-lap contest, but Daniels was able to fend off his rival and cross the finish line second with Olmedo coming home third.

“My plan was to just go as fast as possible in the beginning, and make a little gap,” Landers said. “I just tried to never look back. I didn’t believe it. Coming into the last corner, I was like, ‘I did not expect to do that.’ Then I just tried to push and tried to make really good lap times.”