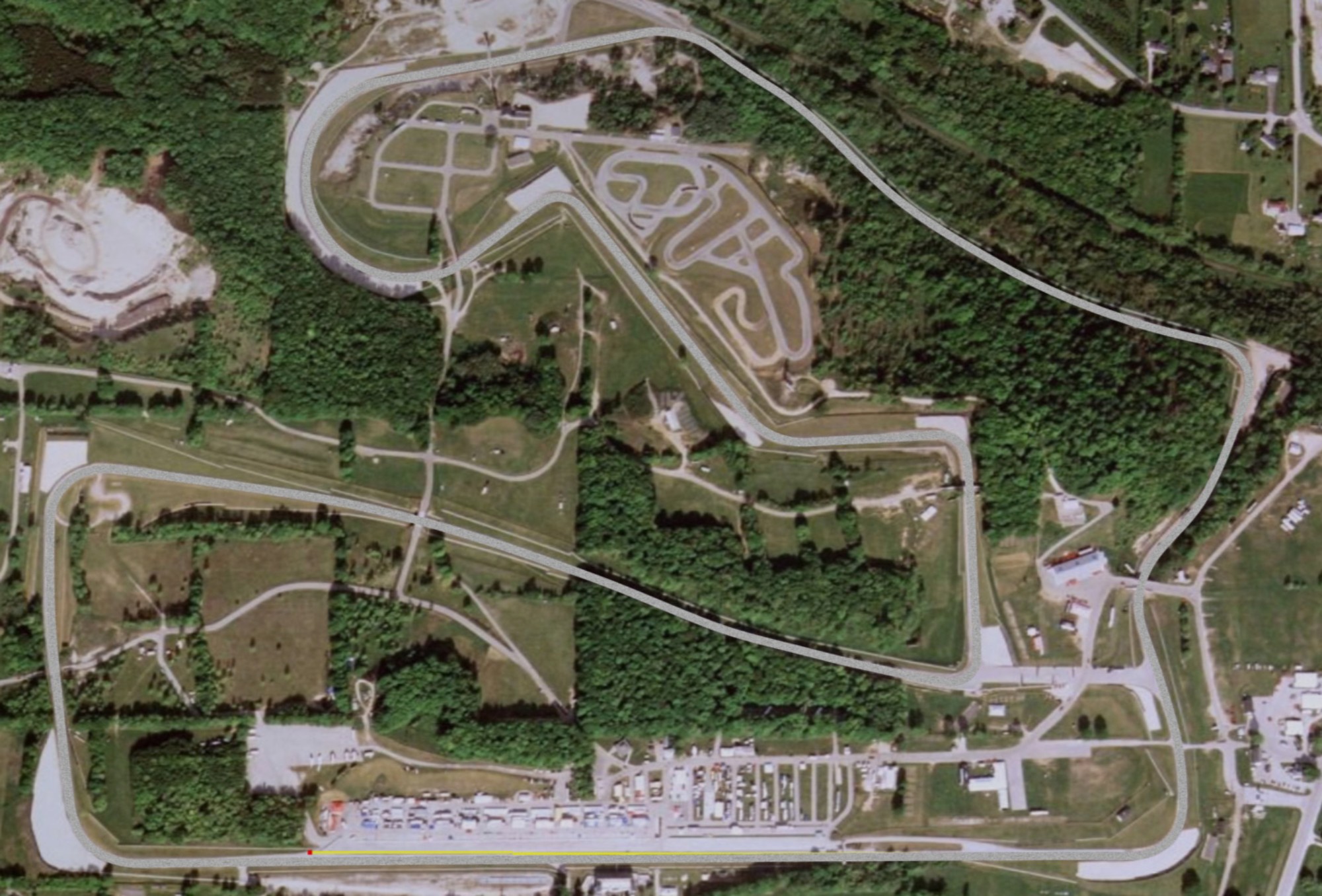 Championship Point Standings (after 8 of 20 races): 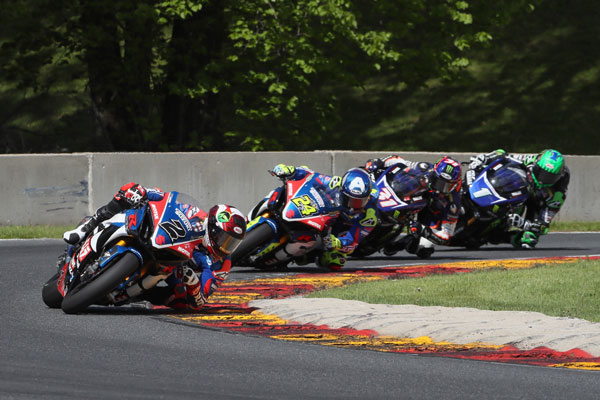 Herrin was solid throughout the 13-lap EBC Brakes Superbike race and it resulted in his second win of the year and the eighth of his AMA Superbike career, the Georgian holding off Beaubier by .506 of a second at the finish.

Herrin’s win moved him into a tie for 22nd with Tommy Hayden and Wes Cooley on the all-time AMA Superbike win list.

“I was comfortable sitting behind Toni (Elias),” Herrin said. “From just the glance I get at the monitors (JumboTron), it’s nicer to take a glance at the monitors than it is the pit board because it just shows you exactly where they are. I could see that we had a little gap on Cameron (Beaubier), I thought. I was just drafting Toni and then I’d kind of pull up alongside of him. One of the laps, I think he thought I was trying to race him down the back straight and maybe beat him on the brakes. I saw him shake his head and maybe getting frustrated. He just rolled off, like just go. That’s not what I wanted. I wanted to keep doing what you were doing and trying to break those guys because I know our bikes were running fast this year. But somehow it ended up working out in the end. I just knew that on the last lap I wanted to make a pass somewhere that for sure he wasn’t expecting it. I think where I did it was perfect and enough to kind of get him flustered. Then his whole plan kind of goes out the window. He was probably expecting me to go in on Canada Corner and come in a little hot and then cross back underneath him. So, it worked out perfect for me.

“It kind of felt like COTA all over again. I thought I was going to be able to break him after he made a mistake with three to go. I put my head down and did a couple 12.5s, but it wasn’t enough. I’m super happy with the result, obviously. But frustrated that it’s only my second podium of the year. Two wins are great, but we need more podiums. We’re far back in the points so the rest of the year we really got to put our head down. Now that I’m comfortable on the bike we just got to put our head down and hope for the best.”

Beaubier had been in the lead trio for the majority of the race and was handed second place on a platter when Herrin’s teammate Toni Elias, the winner of Saturday’s race, crashed out of the battle in the final corner. Elias’ miscue not only gifted Beaubier second, it also put the battle back into championship battle as Beaubier gained 20 points on the championship leader and now trails Elias by just nine points, 151-142.

“Coming into this round I had a lot of confidence, to be honest,” Beaubier said. “Just given the record that we’ve had here the last few years, we’ve won quite a few races. I think I have six or seven Superbike wins here. I just love this place. I love this track. It suits my R1 really well. It suits my riding style really well. We’ve just kind of been a little off all weekend. Like I said, I really wanted to win this weekend, but coming out of here with two seconds and riding as hard as I could, like I said earlier I left it all out on the track. I did everything I could just to stay on Josh and Toni’s wheel in the race today. I can be happy with that. Unfortunately for Toni, he crashed but gave us a pretty good chunk in points because we were pretty far back going into the race this afternoon. So now I think it’s nine points, so it’s going to be a dog fight the rest of the season. Both these guys are riding incredible, along with JD (Beach) and Matty (Scholtz) and a couple other guys going into some of the rest of the tracks this year. So, it’s going to make for some really good, exciting racing and I’m looking forward to it.”

Beaubier’s teammate Garrett Gerloff finished third for the second day in a row, the Texan ending up 6.172 seconds behind Herrin. In turn, Gerloff was five seconds ahead of Attack Performance Estenson Racing Yamaha’s JD Beach.

“Honestly, I’ve got to watch the race over again because I don’t know what happened,” Gerloff said. “It was literally like I was there, felt good, dicing. We were all doing good times. Then just lost the draft. I can’t even remember where. I think it was three. I kind of ran a little bit wide in three and got just a few more bike lengths in-between me and Cameron and the draft was gone and that was it. Just shot off the back. It was kind of unexpected, I guess. It’s frustrating because I felt good. I felt like I had a good bike. Then for that to happen it just sucks. At least I was able to stay there. I figured something might happen on the last lap between these guys and it ended up being Toni’s own fault, I guess. Glad I was able to just keep it on two wheels and to get lucky today and be on the podium. Not ideal, but I’ll take it.”

KWR Ducati’s Kyle Wyman matched his best finish of the season, the New Yorker finishing sixth – just .069 of a second ahead of Scheibe Racing BMW’s Jake Gagne, who had M4 ECSTAR Suzuki’s Jake Lewis hot on his heels.

“We had a great win on Saturday and then I had the crash today because I flinched in the final turn when Cameron (Beaubier) came in,” Elias said. “I could not finish because the handlebar broke off. I congratulate Josh for his win. He has worked hard and is very deserving of this. I am sorry to my team for my mistake, but we will come back and fight again to build back our lead.”

In Supersport, Team Hammer’s M4 ECSTAR Suzuki squad had the measure of the field on Sunday, and its teammates Bobby Fong and Sean Dylan Kelly had a rousing battle for the win between themselves and also with Rickdiculous Racing Yamaha rider Hayden Gillim. All three of them led the 11-lap event, and in the end, Fong maneuvered his bike onto the final straight in order to break Gillim’s draft, while Kelly drafted past Gillim. Fong took the checkers and Kelly barely squeaked past Gillim to take second and shuffle Gillim to third.

“I thought it was a real good race,” Fong said. “I knew Hayden was going to be up there. He’s real strong. He has more confidence in his front end than anybody I’ve ever raced with, so I knew he was going to be up there. He’s a hard charger. I knew my teammate would be up there. I knew I wasn’t going to pull away. I was just trying to hit my marks and just tried to ride a smooth race. The last lap, I was trying to ride defensive and go inside. Fortunately, we got the win today and we got 25 points, but I’m looking forward to a lot more battles this year.”

In Sunday’s Liqui Moly Junior Cup race, the odds-on favorite to win was Saturday’s victor Rocco Landers, and the Ninja400R.com/Norton Motorsports/Dr. Farr Kawasaki rider lived up to the hype by drafting into the lead on the final stretch to the finish line. Quarterley Racing/On Track Development Kawasaki rider Dallas Daniels led throughout the majority of the seven-lap contest, but he fell victim to Landers’ draft maneuver for the second day in a row, and on Sunday, Altus Motorsports Kawasaki rider Kevin Olmedo also snuck past Daniels, which resulted in Olmedo finishing second and Daniels taking third.

At a track that favors top speed and horsepower, the expectation in MotoAmerica’s Twins Cup class was that Michael Barnes and his Quarterley Racing Ducati Monster 797 would dominate Sunday’s race. As it turned out, Barnes was at a disadvantage against the smaller-displacement bikes due to their ability to draft past the Ducati. AP MotoArts Yamaha rider Draik Beauchamp got a great jump at the start and kept himself in the lead pack throughout the eight-lap sprint. He was challenged by both Barnes and Roadracing World Young Guns Suzuki rider Alex Dumas. Beauchamp took the lead and kept it to record his first career Twins Cup victory, while Dumas’ second-place finish was his first career Twins Cup podium. Barnes finished third.

“I started off on the second row in sixth,” Beauchamp said. “My main goal was just to get up there and be part of the fight and have something for the guys out front. I got up there and I actually had more pace than I thought. I was like, okay, let’s get up there early and just keep them behind me at that point. I ran that strategy. Kept them behind me. I was like, let’s run this all the way home. So I did and we got the job done. I want to thank my team, my sponsors, everybody, my dad for busting his butt out here. I’m looking forward to the rest of the season and hopefully sitting back in this seat again.

In MotoAmerica’s Stock 1000 class, MESA37 Racing Kawasaki’s Stefano Mesa moved up a spot from the second-place result that he got in Saturday’s race to grab the victory on Sunday. Franklin Armory/Graves Kawasaki’s Andrew Lee finished second and Ride HVMC Freeman Racing Kawasaki rider Corey Alexander was third. Ironically, neither Mesa nor Alexander have been regulars in the MotoAmerica series, and both of them finished on the AMA Supersport podium at Road America seven years ago when Mesa won.

“The bike and I worked very well this weekend, so we’re happy with the progress,” Mesa said. “Hopefully, we can keep going this season, since we’re leading the championship now.”