MotoAmerica: More From The Races At Pittsburgh International Race Complex

MotoAmerica: More From The Races At Pittsburgh International Race Complex 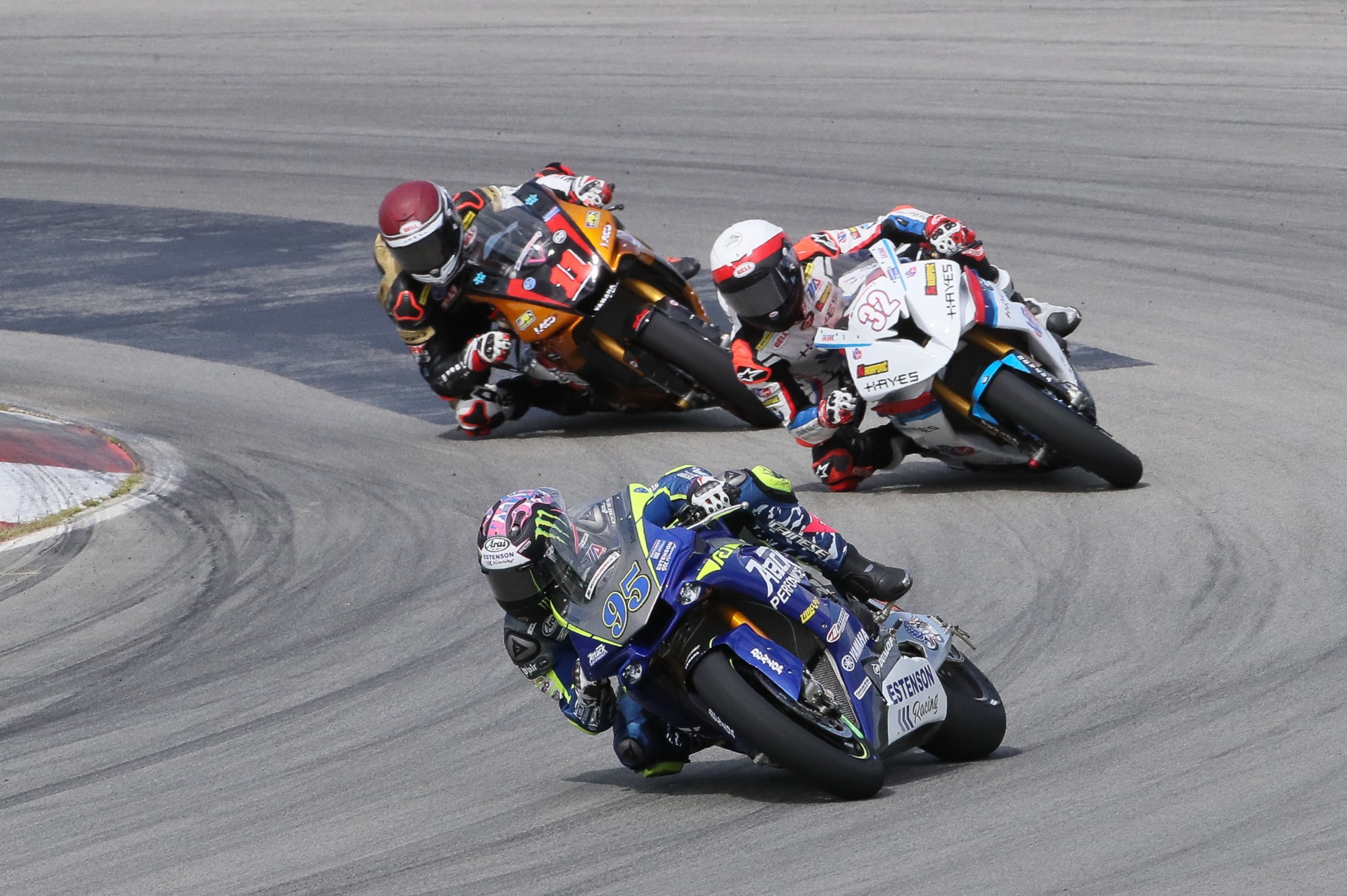 In spite of challenging conditions, JD Beach managed another six-place finish at round eight of the MotoAmerica Superbike Championship on Sunday, August 25, at the Pittsburgh International Race Complex.

Over the past few rounds, Beach and the Attack Performance Estenson Racing team have been working hard on the set-up of their Superbike racer. While they were aiming to better their result, progress was made. Beach was able to advance from his seventh-place position on the grid to fifth, but ultimately settled in to take a solid sixth-place finish and maintain his position of fourth in the championship standings.

The focus is now shifted to the penultimate round of the 2019 MotoAmerica Superbike Championship at New Jersey Motorsports Park, on September 23-25.

“Even though we got another sixth today, I can be a bit happier. With all of the struggles we’ve been having the last couple of weekends, I think we’ve finally made some headway. I can almost see the light at the end of the tunnel now. With the issues that we were having with the forks, it made it hard to even try to push through it. The changes we made for warmup before the race weren’t anything crazy. They were pretty simple, really. I really wish we would have thought about it earlier this year. But together, the team and Richard have done an amazing job and we have not given up and keep pushing through it. I’m looking forward to New Jersey and hoping that we can carry this progress forward.”

More, from a press release issued by Westby Racing: 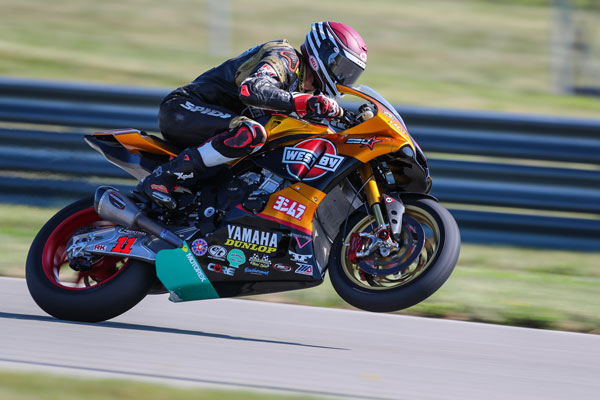 Wampum, PA – After a challenging Friday and Saturday at Pittsburgh International Race Complex resulted in a respectable fifth-place result for Mathew Scholtz and the Westby Racing team in Saturday afternoon’s Superbike race one, Sunday dawned with new optimism for Mathew and his squad.

Changes to the #11 Westby Racing Yamaha YZF-R1 Superbike overnight and also after the morning warmup led to Mathew getting a good start from the inside of the third row in Sunday afternoon’s race two. Quickly moving up from ninth to seventh in the first couple of laps, he felt good with how the bike was handling on the undulating 2.78-mile, 19-turn road course. On lap five, Mathew moved into sixth, and one lap later, he got into the top-five. For the rest of the 18-lap race, Mathew kept a stranglehold on his fifth-place position and ended up the second-highest-finishing Yamaha rider in the field.

“We made some great progress with the bike this weekend,” Mathew said. “I know that two fifth-place finishes are not quite up to the standards that the Westby Racing team is accustomed to, but yesterday’s fifth was partially the result of a couple of riders not finishing the race. Today’s fifth was so much better than yesterday’s. We had much better pace, and I felt a lot more comfortable on the bike. The changes we made were encouraging, and we think they’ll give us some good results in two weeks when we go to New Jersey Motorsports Park.”

After a week off, Mathew and the Westby Racing team will be back in action for round nine of the 2019 MotoAmerica Superbike Championship, which is a two-day race weekend at New Jersey Motorsports Park on September 7 and 8 in Millville, New Jersey.

For more updates about Westby Racing, including news, photos, and videos, visit https://www.WestbyRacing.com 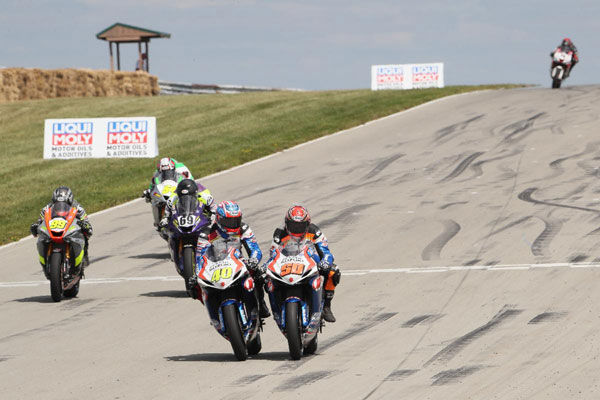 Rising stars Sean Dylan Kelly and Alex Dumas each backed up their Saturday victories to complete the double double for the squad, while the team’s veteran riders, Bobby Fong and Jake Lewis, put in highlight performances of their own.

Despite hobbling around on crutches with injuries to his left ankle, foot, and back from Saturday’s terrifying highside, Fong not only made the start of Saturday’s MotoAmerica Supersport race, he actually got away in second place, running right behind his M4 ECSTAR Suzuki teammate Kelly.

The two ran 1-2 aboard their identical GSX-R600s through the race’s first five laps before a red flag brought the action to a short halt while a crashed bike was removed from the track surface. When the action got back underway, the courageous Fong actually put a quick pass on Kelly and controlled the race from the front until the final lap.

At that point, the teammates executed a series of breathtaking passes on one another with the final pass coming from Kelly entering the final section. The two powered down the front straight side-by-side, with Kelly edging out Fong by just 0.005-second at the finish line.

“I want to say massive respect to my teammate,” 17-year-old Kelly said after scoring his second career MotoAmerica victory a day after earning his first. “I really can’t believe Bobby was riding that fast with how injured he is. I saw how much pain he was in all yesterday and all of today. He rode his heart out.

“I still can’t believe I won it, to be honest. I’m super pumped to get this double win. It’s still hard to take in. I’m just happy for the whole team, doing the 1-2. They all deserve this, so we’ll keep rolling like this.”

Fong, who didn’t think he could even ride and then was only hoping to minimize the championship damage on Sunday, actually stretched out his Supersport title lead with his gutsy effort. He now leads by 11 points with four races remaining.

After taking what was the most memorable of his 10 podium finishes this season, Fong said, “I woke up this morning, and I didn’t want to tell my team, but I was like, ‘No way am I going to be able to ride.’ Honestly, this is my first chance at a real championship, so I had to do it for my team. They’ve been fighting for a #1 plate for a long time. My team backed me the whole time. And congrats to Sean — he rode an awesome race. I didn’t know who had it at the line, but kudos to him. I’m looking forward to more battles yet this season.” 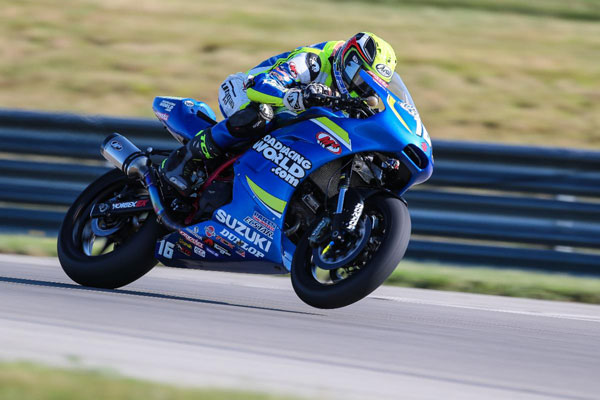 Roadracing World Young Guns Suzuki’s Alex Dumas proved unstoppable in Twins Cup action yet again, claiming his fourth victory in five races by a near double-digit margin. The Canadian pushed hard early to establish himself out front and then used his superior pace to break free of the pack. The win was Team Hammer’s 80th in AMA and MotoAmerica competition, and its 227th podium finish in the national series.

Dumas now leads the championship fight by nine points. He said, “My strategy was to try to lead and build a gap early. To do that, I knew I had to get a good start. I did, but I got passed. I managed to get back by pretty quickly and from there it all worked out to plan.”

After crashing in a chain-reaction incident in Saturday’s MotoAmerica Superbike race, M4 ECSTAR Suzuki’s Jake Lewis demonstrated the depth of his potential in Sunday’s rematch.

The talented Kentuckian got away in second place aboard his GSX-R1000R and moved into the lead on the second lap. He held the position for several laps before ultimately settling into an intense race-long scrap for the podium, running second, third, and fourth at various points of the race.

Lewis would take the checkered flag in fourth, less than a second behind third and just over four seconds behind the winner. The result was the best of his six top-five premier-class finishes in 2019.

The only stinging disappointment the team suffered on an otherwise standout Sunday was a nasty warm-up lap crash suffered by Autovest Suzuki’s Joseph Blasius prior to the Twins Cup race. Blasius was able to get up to his feet and walk off the track but was in obvious pain afterward. He was loaded up in the ambulance, and checked out at the track medical center before being taken by car to a local hospital for X-rays. He was then treated for a broken metacarpal bone in his left hand and released.

Team Hammer will next head to New Jersey Motorsports Park on September 7-8 for the penultimate round of the 2019 MotoAmerica season.