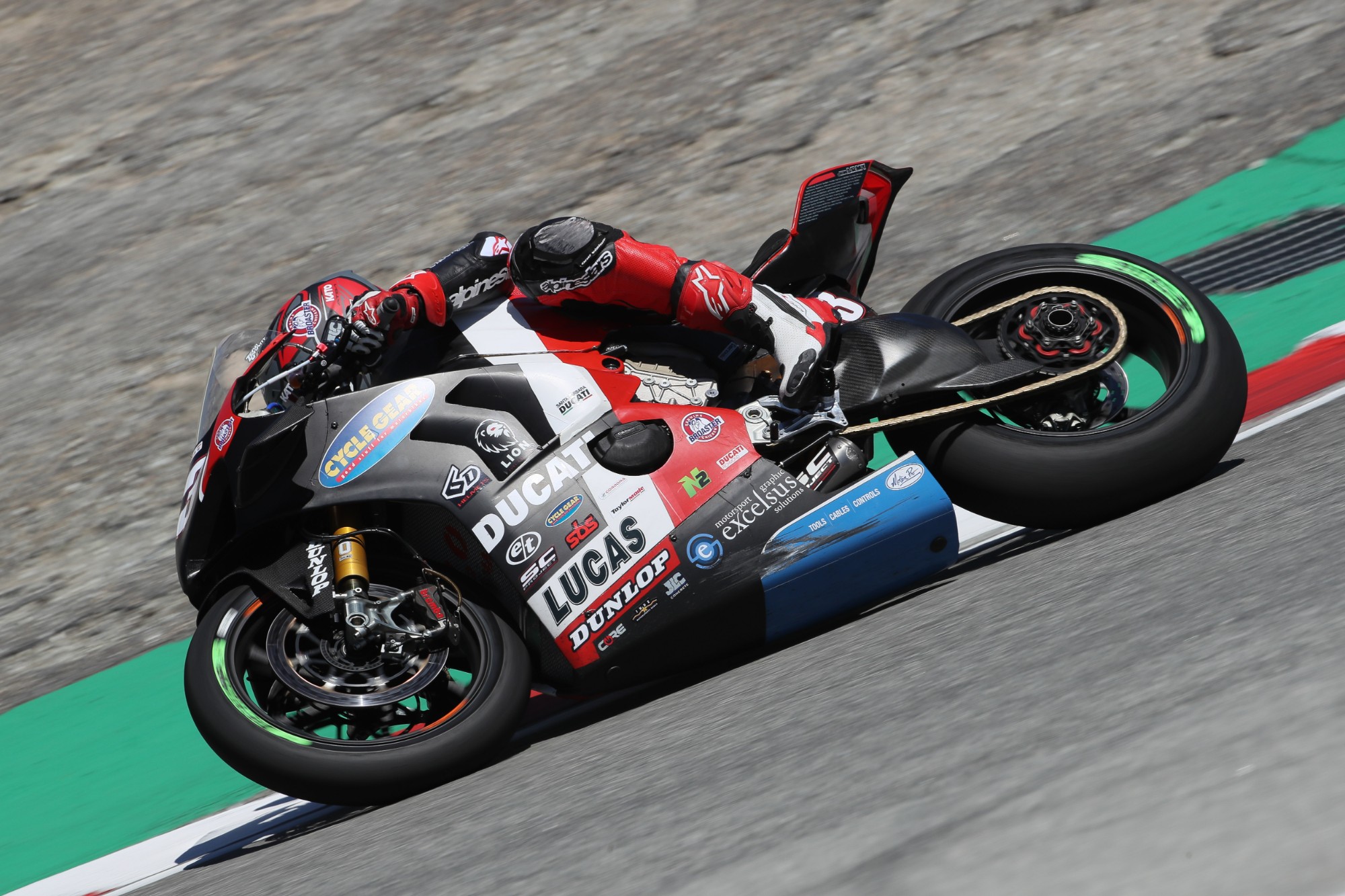 Less than one month after breaking his left wrist, Kyle
Wyman will be back on board his Lucas Oil/SC-Project Ducati Panigale V4 R
Superbike during the Cycle Gear Championship of Sonoma MotoAmerica event this
coming weekend at Sonoma Raceway.

Wyman suffered a broken scaphoid bone in his left wrist when
another rider (Jayson Uribe) hit him at the beginning of MotoAmerica Superbike
Race One July 13 at WeatherTech Raceway Laguna Seca, causing them both to crash.

Wyman had surgery to stabilize the fracture with a screw on
July 15 and hoped that he would be able to ride in the upcoming event at Sonoma
Raceway, which is located close to two of his sponsors – Ducati North America
and Cycle Gear.

Wyman first tried to ride with the recovering injury during
a Yamaha Champions Riding School (where he is an instructor) last week at the
Ridge Motorsports Park, in Washington, but that outing didn’t go well as Wyman
said he lacked strength, suffered through a lot of pain, and experienced
significant swelling in his wrist after riding.

Earlier this week, Wyman did another test of his wrist,
riding his Ducati Superbike at Inde Motorsports Ranch in Arizona, and that test
proved to be much more encouraging.

“A week makes a big difference,” said Wyman. “It swelled up
a lot less and it feels like I’m at about 80-85%. If it were the right wrist it
would be a struggle, but I think I’m going to be able to work around it. It’s
not ideal, but it’s doable.

“I’m relieved and excited, because last week I was pretty
down about it. But I feel a lot better about it now. My biggest worry was I wouldn’t
be able to continue developing the bike because I wouldn’t be able to ride at
the level I need to, but I feel like I’m going to be able to.”

Wyman’s test to assess the level of his wrist then quickly
turned into a full-fledged test of new steering head offsets he was set to try
at Laguna Seca, new Öhlins
forks to replace those damaged in the crash, and an early-generation works swingarm
that came in recently from Ducati Corse.

“The swingarm came with a linkage and a shock, a
combination,” said Wyman. “The link I feel like was a huge step. I feel like I
really picked up some grip. We were at maximum stock length and [with the new
swingarm] we have another 20mm we can go back. We’re planning on going back now
that we felt it in the stock position.

“The offsets felt like a positive change at the front, as
well.

“As far as the forks, I had the Regular stiffness [fork
legs], and I bought a set from Westby Racing to replace mine and they’re the Soft
[fork legs]. I wanted to go to the Soft. So now we have the Soft outers, and I
feel like that’s picked up some feel for me, too. So we’ve found something at
both ends, I think.

“Obviously, we want to be competitive and finish as high as
we can, but considering my condition and all the new parts I almost have to look
at this weekend as more of a test, at least that mentality. I’m going to try to
go in a little bit more relaxed, and that usually helps me.”