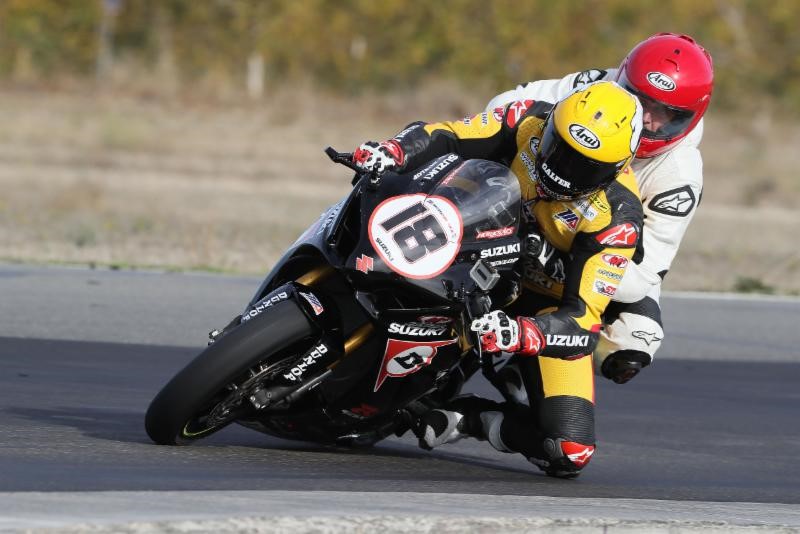 The Dunlop M4 Suzuki Two-Seat Superbike Program run by Team Hammer, Inc. will continue to provide thrills, expand minds, and offer opportunities to gain a greater appreciation for the skills demanded from the riders of the MotoAmerica AMA/FIM North American Road Racing Championship in 2018.

Entering its 18th year of operation — and its second in its current expanded guise — the Dunlop M4 Suzuki Two-Seat Superbike Program will once again allow media representatives, VIPs, and fans a chance to gain an on-track experience otherwise reserved solely for the nation’s elite racers, and do so during actual MotoAmerica event weekends.

Even when watched from the fence or on the screen, MotoAmerica racing is among the most breathtaking and visceral sports in existence. However, there are some aspects of the sport that just cannot be fully comprehended until experienced with the tarmac passing by inches away and blasting past at triple-digit speeds.

That unique vantage point has proven itself as an invaluable promotional tool time and again, routinely transforming even the most diehard non-enthusiast media skeptics into hardcore believers in a matter of laps. And for the diehard fans who already believe, such a ride can be the experience of a lifetime.

“I am excited about the two-seater program for 2018,” said Team Hammer’s Chris Ulrich, the lead two-seater pilot. “We’ve been doing this for years and everyone who has been a part of it has had a blast and that includes me. It’s great to share the sport I love with other people and it is a unique opportunity to grow the sport we love and also help the Roadracing World Action Fund and make the sport safer at the same time. We built a lot of momentum in 2017 when we teamed up with MotoAmerica and Dunlop and by mid-season we were sold-out everywhere. We look forward to offering this unique opportunity to fans, the media, and VIPs again this year.”

“We’re very happy to have the two-seater program back for this season,” said MotoAmerica President Wayne Rainey. “It’s great for a lot of reasons, but what stands out to me is that it really gives our media and VIPs the chance to experience what motorcycle road racing is all about. It puts them on the bike and allows them to experience the speed and lean angles that our racers take to an even higher level. It’s also a good program because it gives back to the sport through the money that is donated to the Roadracing World Action Fund.”

Mike Buckley, Dunlop Motorcycle’s Vice President of Sales and Marketing, said, “The Dunlop M4 Suzuki Two-Seat Superbike Program has proven to be a huge success, and we’re excited to bring it back in 2018. It’s important to us at Dunlop to help spread the word to let potential new fans and customers know just how amazing this sport is and foster its continued growth.”

VIP and media rides will be available on Thursday and Friday at each stop on the 2018 MotoAmerica calendar. Six two-seat rides will be open to the public on the Sunday of each race weekend for fans who purchase a special package that includes a donation to the Roadracing World Action Fund (RWAF), a 501(c)(3) non-profit focusing on improving racetrack safety through the deployment of soft barriers.

Ticket information can be found at https://www.theticketfairy.com/tour/2018-motoamer…

Hungary set to join the MotoGP™ calendar from 2023 A...
Read more
Feature