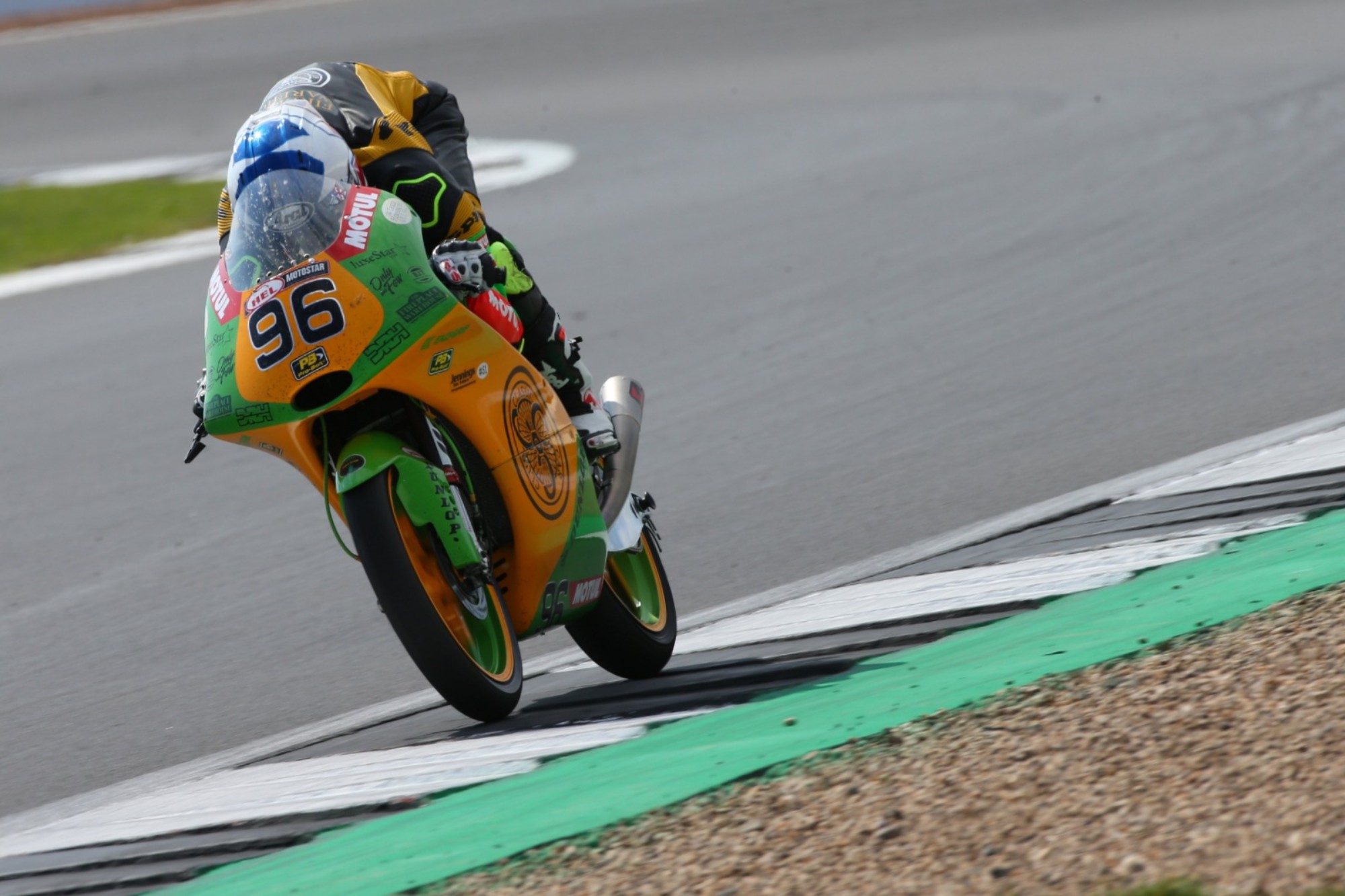 American Brandon Paasch raced as a wild card in the FIM
Moto3 World Championship event August 23-25 at the Silverstone Circuit, in
England, and although he didn’t score any points he says he met his goals, learned
a lot, and had fun during the weekend.

“It was my idea,” said 18-year-old Paasch, when asked how
the concept of him racing as a wild card in Moto3 at Silverston came about. “I
had been watching during the past few years and whoever is usually leading the
[British Motostar/Moto3] Championship usually does a wild card. I didn’t really
know how it worked, but I said, ‘Hey, is there any way I can get in on this?’”

Paasch, who rides for FPW Racing in the Moto3 equivalent
class in the British Superbike Championship, British Motostar, was leading the point
standings up until the most recent round, August 16-18 at Cadwell Park. There,
Paasch crashed out of both races and dropped out of the Championship lead.

“That was kind of an unlucky weekend,” said Paasch. “I felt
good all weekend and I was riding well all weekend. Through practice and
qualifying I was thinking, ‘Man, this is the best I’ve ever felt on this bike.’
I don’t know. I just had two terrible races.”

Paasch and his team went from the tight and twisty Cadwell Park
to the vast and fast Silverstone Circuit, where they set up on the Wednesday
prior to the event.

“I had the new rider’s meeting on Wednesday,” said Paasch. “It
was one guy from FIM and Freddie Spencer, and they went over the rules and
procedures. I did a couple of races in the Junior World Championship, so it
wasn’t too difficult for me to figure out.

“On Thursday I had to do a lot of press stuff with Dorna,
interviews and photos. Just walking through the paddock with my leathers on so
many people stopped me. It was unreal. I haven’t signed that many autographs in
the past three years combined. It was crazy.

“Then on Friday it hit me like, ‘Wow! This is really
happening.’”

Paasch said he had ridden on the Grand Prix circuit at
Silverstone before and had even done a track day recently to get a feel for the
new pavement, but what he wasn’t expecting was to have to adapt to different
tires.

“We run Dunlops in the British Championship and I thought
they would be exactly the same,” said Paasch, “but they were actually quite a
bit different and they took a bit of getting used to. They didn’t have any
Medium-compound tires like we use in the UK, but they had Softs and Hards.

“My bike is a 2018-spec KTM. So in theory it shouldn’t be
much slower than the newer [2019] bikes, but then we added me on the bike. I
don’t like using it as an excuse, but it is a fact that my weight does come
into play on these little bikes. I weigh 155 pounds and all of these other guys
are like 130-135 pounds and some are closer to 100 pounds, so it’s a big
difference. I found that out.

Asked what his goals were heading into the weekend, Paasch
said, “I set the goals of: Don’t finish last, improve every time I got out, and
improve the bike as much as I can for the rest of the season. We’ve been
struggling a little bit in the British Championship finding our setup, so I
really wanted to focus on finding a setup for our bike that we could bring back
to BSB.”

In FP3, Paasch improved to 2:15.857, which was 4.0 seconds
slower than Arbolino, the quickest rider in that session.

Then in qualifying, Paasch improved again to 2:14.742, which
put him 30th on the 31-rider grid and only 3.1 seconds behind pole
sitter Arbolino.

“I qualified second-to-last, but it was still better than
being last on the grid,” said Paasch, laughing. “In the race, I thought that I
could hang with the next group in front of me, but I got pushed off the track
on the first lap and kind of lost the draft.

“During the first four or five laps, I was maintaining the
gap to the group in front of me. I wasn’t catching them, but they weren’t
pulling away. But I was sitting in No Man’s Land all by myself with no
slipstream. And then after six laps or so, they started working with each other
instead of battling and they started pulling away little by little. Before I
knew it, I couldn’t see them anymore.”

“Technically I didn’t finish last, but in my mind I did
finish last. These guys are just on another level,” said Paasch. “But it was still
probably the most fun I’ve had on a race weekend ever.

“And we fixed a couple of big issues I’ve been having with
the bike. I’ve been struggling with confidence on the front end, and throughout
the practices and qualifying we spent most of our time working on that. We
tried something, and it ended up working really well.”

Paasch said he hopes that what he learned about his bike
setup will help him regain the point lead during the final four rounds and
eight races of 2019 and become the first American to win the British Motostar
Championship.

More, from a press release issued by Brandon Paasch’s publicist:

Brandon Paasch and FPW Racing completed a successful and historic weekend at the Silverstone Circuit, taking their KTM Moto3 GP race bike to the checkered flag in the GoPro British GP Moto3 class. Running during one of the hottest weekends on record for Britain, Brandon became the first US rider to ever qualify for and complete a Moto3 race in the modern MotoGP series.

After three practices and a fast qualifying session, the team was ready for the Moto3 race Sunday. A couple adjustments in warm up provided a bit more stability for the KTM, and Brandon felt confident on getting a strong start. When the lights went out, he tagged onto the group of riders in front of him and was able to stay in the group for the first couple laps. On Lap 3, Brandon turned his personal best lap of the whole weekend and continued to dice with the group of riders. Unfortunately, a rider just ahead caught a false neutral in one of the fast right-handers, and, as Brandon swept around the outside to pass, the rider found the gear, drove under Brandon, and forced him wide off the track. At that point, the tow from the group was broken and he was forced to run a lonely race to the end. But Brandon never quit, and he became the first ever US rider to complete a Moto3 race.

“Man, that was probably the most physically demanding race I’ve ever run in my life. More than any endurance race I’ve done, even more than Daytona. The pace was very high, and the heat was almost ridiculous. My legs were on fire, and the tires got overheated a little over halfway through the race. At the end, I was just focusing on keeping the bike upright and hitting my marks to make it to the finish. I knew my biggest challenge this weekend was racing against the best Moto3 riders in the world, and I knew I would be pushing my limits beyond anything I had done before. But I, and the whole team, came here ready to do the job, and we proved that we could do it. We deserved to be here.

“I’m really proud of what I’ve done, being the first American to race in Moto3. It’s been a lot of hard work over the past ten years, and I’ve had a lot of help from some great people and sponsors. The team and I got a lot of press and social media coverage during the weekend, which I believe will help future US riders find opportunities overseas. It’s still my goal to be in MotoGP, and I know I’m helping to carve a path for other US riders to follow.

“I have to say a huge thanks to Adrian, Sarah, Andy, Dave, Joe and Greg from FPW Racing. You all faced as big a challenge as I did on the track, and I really appreciate your hard work to set up the bike and get me out on the track. Big thanks also to all my sponsors, especially to the ones that showed up at Silverstone to help in the garage and cheer me on during the race – Paul, Scott, Dave, Michael, JJ, Eric, Brad and many more. It seems like we had people coming from all around the world to drop by the garage. Thanks to DORNA and IRTA, and thanks to the teams that invited me into their garages to give me some advice and answer my questions. Thanks to Arai and Spidi for keeping me safe, and SL Graphics for the sick paintjob on my lid. To everyone that supported me from back in the USA – thanks very much! I hope I can give you more to cheer about when I get back to BSB Moto3 – stay tuned!” (Brandon Paasch)

“Brandon and the whole team have a lot to be proud of from this weekend. They all worked very hard and faced the big challenges at the track with determination and drive. I’m very happy with our results, as it was a big learning curve for all of us, and we knew the pace would be very fast. The heat affected everyone, so there was nothing to do about that. But we looked at everything very carefully after every session, and for Brandon to improve every session and cut off a couple of seconds from the first time out just shows that we were able to keep in the mix. I’m looking forward to a bit of a break, but I’m already planning our attack back in BSB Moto3 to get back on top of the championship. Thanks to everyone that helped us out this weekend, as we couldn’t have done it without you.” (Adrian Mason, Team Owner)

The next HEL Performance Motostar British Championship round will run Sept 6-8 at Oulton Park. Trailing the leader by just 7 points in the championship, Brandon and the team are eager to take the experience and confidence from the British GP and get back on top of the leaderboard. Supporters and Fans can watch live timing and listen to the commentary at www.britishsuperbike.com or on the Bennetts British Superbike app, available in the Apple App Store and Google Play.

Australian Superbike: Maxwell Quickest In Practice At The Bend

What’s Happening At The Harley-Davidson Museum In December?