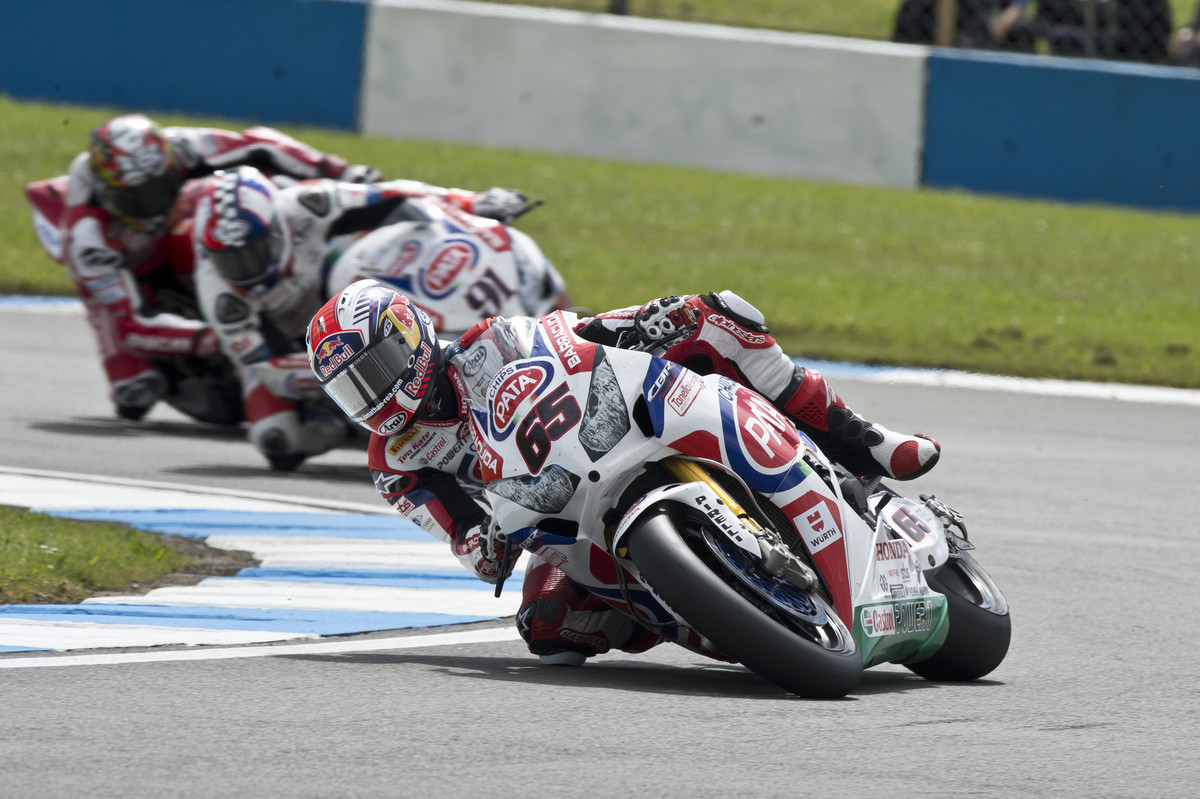 Barcelona (Spain), Tuesday 3 June 2014 – The eni FIM Superbike World Championship heads to previously unexplored territories as the series will race for the first time at the Sepang International Circuit this weekend. The Malaysian venue, located 50km south of the Capital City Kuala Lumpur, will host the sixth round of the 2014 season.The state of the art circuit has a 5.548km sweeping cornered layout, with two back to back straights characterising the final part of the lap.

New Championship leader after Donington Tom Sykes (Kawasaki Racing Team) has never raced at Sepang before but has always done well at new circuits on the calendar in the past two years: the Brit won the opening race at Moscow Raceway and was second in Race 2 in 2012, while last year at Istanbul he was third and second in the two encounters after starting from pole. The 28 year old from Huddersfield did a test with Kawasaki at Sepang back in 2011 in preparation for the season debut of the new partnership between the Japanese manufacturer and Provec Racing (the current Kawasaki Racing Team).

Sykes aims to continue the good form shown at Donington, after the stunning double taken two Sundays ago at his home track. The reigning Champion had one of the best races in his career in race one, as he made his way up through the field after a poor opening lap to take a remarkable victory over teammate Loris Baz.

After missing out on the podium in the last outing, Jonathan Rea (Pata Honda World Superbike) is looking forward to competing at Sepang. The Ulsterman knows the track already despite not having raced there before, as he did a test for HRC back in late 2010. Rea currently sits second in the standings and he is tied in points with Frenchman Baz.

The Aprilia Racing Team paring of Sylvain Guintoli and Marco Melandri have vast experience of the Sepang International Circuit, having taken part in many events in the past at the venue. The two long straights of the Malaysian track may well suit the RSV4 factory machines and the two riders are hoping for strong results for different reasons: Guintoli is still well positioned in the title race as he lies fourth just 37 points from the top, while Melandri desperately needs a good performance after another difficult round of the season at Donington. Melandri stood on the podium at Sepang in 2007, as he crossed the line in second place in the MotoGP race behind winner Casey Stoner.

Aussie Bryan Staring, who is set to make his season debut at Sepang this weekend with Team Iron Brain Grillini Kawasaki, is the only entrant of the EVO class to have contested a race in Malaysia before. The battle for best in the new category is going to be as open as ever, with David Salom (Kawasaki Racing Team), Niccolò Canepa (Althea Racing Ducati), Leon Camier (BMW Motorrad Italia Superbike) and the rest of the EVO field ready to resume their battle for the top honours.

The Supersport World Championship is gearing up for the first ever race of the series at Sepang. Of the top 10 riders in the title race, six of them have already raced at Sepang in the past, with the most successful on the Malaysian track being Roberto Rolfo (Team Go Eleven Kawasaki). The experienced Italian rider, currently ninth in the standings, was third in the 250cc Grand Prix race in both 2001 and 2002, while in 2010 he stood atop the Moto2 podium.

Van der Mark has to look out for the likes of Jules Cluzel (MV Agusta RC – Yakhnich Motorsport) and Kenan Sofuoglu (Mahi Racing Team India Kawasaki), both eager to do well on a track they have knowledge of from the past. The Frenchman’s points situation is much more encouraging than the Turk’s as Cluzel lies at the moment in third place, 28 points shy of the leader, while Sofuoglu sits in seventh with a significant 52 point gap from the top.

More, from a press release issued by Althea Racing:

The sixth round of the World Superbike Championship will take place during the weekend of the 06th-07th-08th June 2014 for the first time on the Sepang International Circuit in Malaysia, where Althea Racing Team and Niccolò Canepa are ready for this new challenge on a circuit which is still unknown to the team, whereas for the rider Niccolò Canepa it is a return after years, having already competed in the past on this circuit in the MotoGP World Championship. Despite this, the Team is prepared to face the weekend giving as usual its best.

This racetrack, is the seat of the Malaysian Formula 1 Grand Prix, also used for various motoring and motorcycling competitions. The circuit is located at a short distance from the capital city of Malaysia, Kuala Lumpur, and it was officially inaugurated on the 9th of March 1999. Built with modern technologies, it has been considered over the years a reference model for the new racetracks thanks to the creation of wide and functional grandstands, and to very high quality service areas such as box and press rooms. Overall, it can accommodate up to 130,000 viewers. The track is 5.543 m. long, it has 15 turns and 8 straights, to ride clockwise; it allows great overtake possibilities thanks to the two long and very wide straights joined together by a very slow turn.

Niccolò Canepa: “Sepang will be a very important and hard round for all riders and bikes. It is surely a wonderful track, where I rode several times with the MotoGP, but the Malaysian heat and humidity will put us to the test. I have been focusing for months on training and I’m sure I’ll be ready. I do not think that the racetrack well adapts the riding characteristics of the Ducati Panigale 1199 but we will do as usual our best”.

The Pata Honda team is preparing for this weekend’s (6-8 June) two sixth-round World Superbike championship races at the Sepang International Circuit near Kuala Lumpur in Malaysia.

The weekend marks the first visit of the World Superbike championship to Sepang, situated just 60km to the south of the centre of the Malaysian capital, as the production-based series spreads to an increasingly wider global audience.

It will be the first time that the Pata Honda CBR1000RR Fireblade SP has been raced at the fast and flowing 5.548km Sepang circuit, which is characterised by two back-to-back straights at the end of the lap. However, the team’s two British riders Jonathan Rea and Leon Haslam have both visited in the past.

Northern Irishman Rea, 27, tested Honda’s RC212V MotoGP machine at Sepang at the end of 2011, while 31-year-old Haslam from Derbyshire last raced there during a season on a 250cc Honda in Grands Prix in 2002.

I’m really excited about going to Malaysia because it’s a new race on the SBK calendar. I really like the circuit layout and I visited a few years ago when I did some testing for HRC’s MotoGP team in the last season of the 800s. Donington was a tough round for us and we turned our attention to this next round immediately after the races there. I hope we can achieve better results than at Donington and I’m really looking forward to the challenge of taking the CBR on a new circuit. The humidity will be quite intense in Sepang and we’re expecting high temperatures but I’m in good physical conditions to tackle the two races. The most important thing is that we are able to extract the full potential of the bike which we didn’t do at the last round.

I’ve been to Sepang before – it was about 12 years ago, but I remember which way it goes so I don’t see it being too much of a problem. A few of the other riders have ridden there, too, including Johnny, so I’m not sure anyone will have too much of an advantage in that respect. It’s quite a fast and flowing track and the CBR should be quite strong in those areas. The heat will be an issue, of course, and the conditions can make a big difference in lap times from the morning to the afternoon. We’ll hope for some consistent weather that will help us with setting up the bike for Sunday’s races.

Donington was a disappointment for the whole team, especially after the highs of Assen and Imola. However, we have studied a lot in the time since and we have some plans for this next event at Sepang, where we will be bringing some things that we learned on the dyno. Jonathan is motivated and ready to go again, so I hope he can renew his challenge at the top of the table. Leon has been very close to the breakthrough to consistent top five finishes that we’ve all been looking for, and we will be working hard again to make it happen for him this weekend.

More, from a press release issued by Aprilia:

MELANDRI: “INCREDIBLE TRACK, ALL THE RSV4’S HORSES ARE PUT TO USE”

GUINTOLI: “THE TROPICAL CONDITIONS WON’T BE A PROBLEM”

Sepang (Malaysia), 4 June 2014 – World Superbike is headed for its début on the Malaysian Sepang circuit, a new stop on the 2014 calendar. The setting for many world championships, the circuit just a few kilometres from the capital Kuala Lumpur is a rather recent one, opened in 1999. Quite long, more than 5.5 km, the Malaysian track should make for a good show thanks to the combination of long straight stretches, violent braking sections and fast turns.

The Aprilia team riders are very familiar with the tricky new track, having already ridden on it during their respective careers. Both of them see it as a favourable circuit for the characteristics of the Aprilia RSV4, the reigning Manufacturer World Champion bike. Sylvain Guintoli prepared for this round, characterised by a rather extreme climate, with a week of intense training in Borneo.

Race conditions therefore do not concern the French rider: “Finally a track where we will be able to use the raw power of the RSV4. Sepang is a great track, wide, fast and I know it very well from my GP days. I have just completed 7 days of training in Borneo with similar heat and humidity so the very hot and tropical conditions won’t be a problem. Can’t wait”.

Marco Melandri, who has also been working hard to be in top condition for this round, also expressed his appreciation of the Malaysian track. The rider from Ravenna and the Aprilia racing division are focusing on finding continuity and finally aiming for an important result.

Marco Melandri: “It’s nice to be back at Sepang, an incredible track where all the horses of a powerful SBK like the RSV4 are put to use. The races will be very hard given the temperatures and high humidity, but I’ve been working hard and I want to get back in the thick of things to battle for the positions that count. I’m confident in Aprilia’s enormous commitment to put me at ease”.