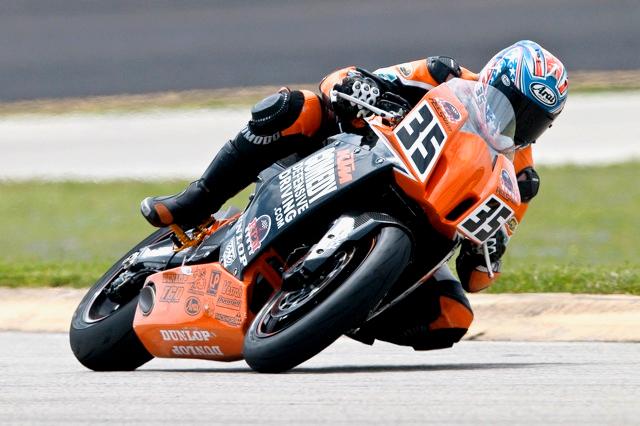 Murrieta, CA KTM Motorsports is thrilled with the Superbike racing results from the 2010 KTM 1190 RC8 R race machine. In its first full year of racing at a regional level the KTM 1190 RC8 took home an impressive 11 Championships from four different riders.

KTM support rider Ty Howard wrapped up the first three championships in the Central Motorcycle Roadracing Association (CMRA) Series. Howard won the A Superstock, A Superbike and Formula One Championships. On his route to victory he went undefeated winning 30 races in a row. In addition to his 3 Championships he was also awarded the CMRA Expert #1 plate which is awarded to the expert rider with the most points at the end of the season. He also paired up with his RideSmart/RPM Cycle/KTM Team and took the victory in two endurance races. The first endurance victory was won over a 4-hour period and the second over a 6-hour interval. In addition to his racing victories, Howard also set three track records at Texas World Speedway, Hallett Motor Racing Circuit and Eagles Canyon Raceway.

Out in California, fellow KTM support rider James Randolph achieved incredible success on his RC8 R machine winning two Championships in the WERA Series. In the final round of the series, Randolph wrapped up the A Superstock and Heavyweight Twins Superbike titles. Randolph went up against Eric Bostrom in the A Superstock class at the final round taking the early lead off the start. While Randolph rode his own race out front Bostrom ran off the track which allowed Randolph to pull a large lead and clinch his first Championship of the day. In the Twins class Randolph led every lap from start to finish and won the race by over 20 seconds to secure his second Championship. In addition to Randolph’s Championships he also won the final Formula One race with a repeat of his Twins run leading flag to flag.

The third KTM pilot is Illinois’ very own Joel Spalding. The multi-time road racing champ picked up a record breaking 4 titles on his KTM RC8 in 2010. Spalding’s earned the 2010 Great Plains Unlimited Superstock Championship, 2010 Great Plains Supertwins Championship, 2010 Mid-West Supertwins Championship and his most prestigious title the 2010 ASRA Pro National Superstock Championship. Spalding has always been a twins rider and began following the RC8 years ago when it was just a concept bike. “I always knew KTM was a “Ready to Race” brand and when I heard they were making a Superbike I had to get my hands on one. I jumped all over the chance to race the bike this year and have not been disappointed,” remarked Spalding.

Continuing the win streak was KTM’s very own Brian Healea. The Ohio native, took home 2 Championship titles in 2010. Healea participated in the AMA Road Race Grand Championship Series where he was awarded the National #1 plate in the Mega Twins and Triples Superstock class.

In addition to the 11 recorded championships, KTM also supported the HMC Racing Team which racked up a number of wins. HMC’s top rider Chris Fillmore competed in 15 races this year of which he earned 13 race wins and landed on the podium in the other two.

With so much success in its first year, it is exciting to think what the future holds in store. Stay tuned for the latest racing updates on KTM and its Superbike efforts at www.ktmusa.com.

More, from a press release issued by Krystyna Kubran’s publicist:

Krystyna Kubran, of Arroyo Grande, California, takes home two novice class championships in WERA West, despite being taken out during the start of the first race.

Kubran was two points behind the leader for A (1000cc) Superstock Novice Championship coming into the final round at Las Vegas Motor Speedway. A Superstock was the first race of the day, and Kubran’s stellar start netted her the holeshot for the Novice class. Another novice rider made a grave error as the field begin to slow for the initial turn one entry resulting in his crash collecting Kubran in the process. It was a team effort to put Kubran’s 2006 Yamaha R1 back together in time to make the restart, thankfully it was predominately cosmetic damage. Despite some fractured ribs and a sprained wrist, Kubran was able to make the restart after a re-tech by WERA officials. She went on to run a personal best lap time, and her second-place finish in the race tied her for the A Superstock Novice Championship. Per the WERA Rulebook, Kubran collected the Championship by having the higher number of race wins.

“What an amazing weekend!” Kubran commented. “I cannot thank my wonderful friends and family for the support over the season, and getting my bike back together so quickly! A HUGE thank you goes out to Lenny Albin at RaceTech, Graves Motorsports, CT Racing – Pirelli Tires, Duran Racing, Scorpion Helmets and Five & Dime Tattoo. Without their support, the weekend, let alone the season, wouldn’t have had a surreal ending.

“The RaceTech suspension handled the Graves power and made my Pirelli shod Yamaha R1 feel like a rocket sled on rails! Roni Duran, of Duran Racing, is the kind of crew chief the AMA teams dream of having!! My Scorpion helmet kept me safe during the opening drama; thankfully it was not fully tested!

“Although I was absolutely furious at being taken out, I wish to thank the rider who took me out as he provided the opportunity to really find out what I’m made of. I wish him a speedy recovery, and look forward to future battles”

Kubran would like to give an incredibly special Thank You to her sponsors for making the season possible! And welcome her newest sponsor MotoNation!

More, from a press release issued by North Texas Superbikes:

Texas World Speedway hosted the final round of the Central Motorcycle Road Racing Associations 2010 season with North Texas Superbikes and Dunlop tire supported teams and riders winning a majority of all Expert and Novice classes.

Former #1 plate holder Ty Howard won every race he entered this season, including leading almost every lap, garnering him the coveted overall CMRA Sprint plate for 2011. “The Dunlop tires just give me the confidence to push without worrying if I’m going to be on my head.” Quipped Howard. “Thank you NTSB and Dunlop.” Moto Ace Racing’s Dustin Dominquez, Derek Wagnon, Jeremy Kidd, Joe Prussiano, and Dicki Mcfarland, continued their Endurance supremacy by capturing its second overall CMRA Endurance championship and individual A Superbike class championship. “We tried another brand at the beginning of the season, and it just didn’t work out. The Dunlop’s simply work the best and last the longest,” stated team owner McFarland.

North Texas Superbikes would like to Congratulate and give a special thank you to all of its supported teams and riders for an excellent season and look forward to continuing the Dunlop domination in 2011.

North Texas Superbikes offers the full line of Dunlop Racing tires which are available at all rounds of the CMRA racing series. North Texas Superbikes supports all racing and track day riding in Texas, Oklahoma, and Louisiana and may be contacted at 1-866-536-1279 or northtexassuperbikes.com. Dealer inquiries welcome.

Hungary set to join the MotoGP™ calendar from 2023 A...
Read more
Load more