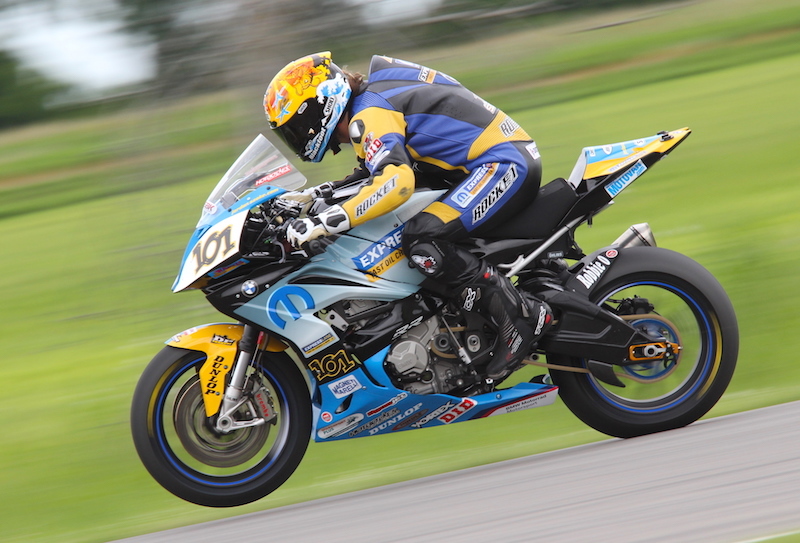 TORONTO, Ont. (June 23, 2016) – The 2016 Mopar Canadian Superbike Championship is still in its early stages but the season hits a major juncture at this weekend’s doubleheader at Autodrome St-Eustache, near Montreal.

With two races for the Pro Superbike competitors there are plenty of points at stake when the racers tackle the tight and uncompromising 1.93km (1.2-mile) 10-turn road course and championship fortunes are bound to swing over the course of the weekend.

Lynden, Ont.’s Jordan Szoke enters the weekend in a familiar spot at the top of the points table following his victory in the season opener at Shannonville Motorsport Park last month on his Express Lane / Motovan / BMW Motorrad BMW S1000RR. The 10-time and defending Canadian champion has now won eight Mopar CSBK races in a row dating back to the start of last season, when he went undefeated on his way to the title.

The 37-year-old Szoke also boasts an enviable record at St-Eustache, with five wins at the track, including four in a row between 2012 and 2015.

Second to Szoke in the standings with 44 points versus 54 for Szoke is Belfountain, Ont.’s Kenny Riedmann. Riding the Sturgess Cycle / Liqui Moly / Speed and Strength Kawasaki ZX-10R Ninja, Riedmann bounced back from a qualifying fall to chase Szoke home in second place at Shannonville and the 24-year-old continues to knock on the door of his first Pro Superbike race win.

A race win is worth 50 points in the Mopar CSBK standings, with four points available for the fastest qualifier in Dalton Timmis Insurance Top 10 Qualifying and a further two points on tap for the rider who leads the most laps in each of the Pro Superbike races.

Matt McBride is just two points behind Riedmann in the rankings after an inspired ride at Shannonville that saw him lead the most laps on his Riders Choice / Dainese BMW S1000RR.

This weekend provides St-Cesaire, Que.’s Kevin Lacombe a golden opportunity to work himself into the points picture after he suffered a non-finish at Shannonville. Making his return to Mopar CSBK action after a three-year absence, the 33-year-old is aboard the Motosport St-Cesaire / Motovan / Zox Yamaha YZF-R1S.

Also worth watching will be the MotoNation / Laval Moto Kawasaki ZX-10R Ninja of Mirabel, Que.’s Sebastien Tremblay, who scored his first career Pro Superbike podium finish when he placed third at St-Eustache in 2014 and was also third in last year’s event.

Bodhi Edie of Warman, Sask. looked set for a top five finish at Shannonville on his Trip-Dub Racing / Z-1 Cycle Tech / Birkett Freight Solutions Yamaha YZF-R1 before a fall dropped him to ninth at the finish.

Fans at St-Eustache will also be treated to the fifth and sixth rounds of the Kawasaki Ninja 300 Spec National Series where Eric Quentin of Ile Perrot, Que. holds the points lead.

Competition begins on Friday with practice for all five national classes. Saturday’s action is highlighted by Dalton Timmis Insurance Top 10 Qualifying for the Pro Superbike class as well as the first Mopar CSBK race and round five of the Kawasaki Ninja 300 Spec Series.

Feature races in all classes will be held Sunday.

…Jordan Szoke became the first racer to score four consecutive Pro Superbike wins at Autodrome St-Eustache when he triumphed in last year’s event, and his five victories overall are more than any other racer in the 20-race history of Canadian Superbike competition at the track. Steve Crevier of Maple Ridge, B.C. and current Liqui Moly Pro Sport Bike competitor Michael Taylor of Toronto have won three times in the Superbike class.

…Autodrome St-Eustache has a history of producing surprise winners. Montreal’s Marco Ferland scored his only Canadian Superbike win at the track in 1994, as did St-Jerome, Que.’s Benoit Pilon in 1997 and Ste-Adele, Que. racer Jean-Francois Cyr in 2002.

…An interesting entry into the Magneti Marelli Amateur Superbike class this weekend will be Canadian flat track ace Doug Lawrence of Port Credit, Ont. The 30-year-old current Canadian champion is scheduled to race a Kawasaki ZX-10R Ninja with backing from Parts Canada and Riedmann Management.