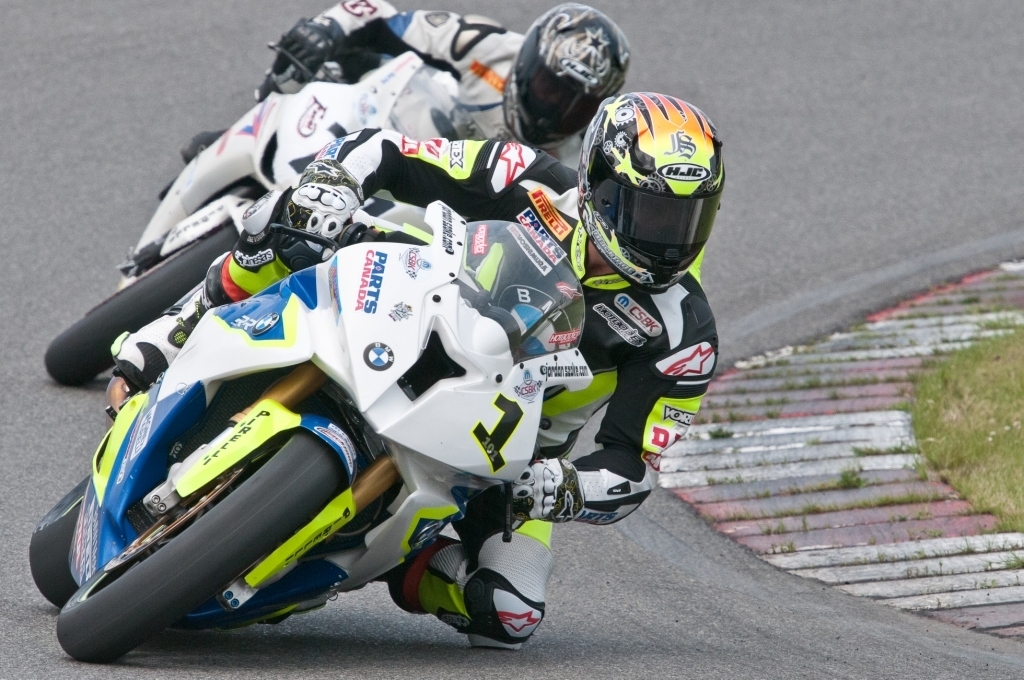 TORONTO, Ont. (July 2, 2014) – Jordan Szoke has developed a habit of making Canadian Superbike history. The Brantford, Ont. racer has won more nationals than anyone, with 44, and his nine Canadian Superbike crowns is also a record.

At this weekend’s second round of the Mopar Canadian Superbike Championship he will try to add another line to his remarkable racing resume by becoming the first racer to win the feature event four times at Autodrome St-Eustache in St-Eustache, Que.

The 35-year-old Szoke brings plenty of momentum into this weekend’s event. He rode his Waznie Racing / BMW Motorrad / Mopar Express Lane BMW S1000RR to an impressive victory in the Mopar season opener at Shannonville Motorsport Park last month, and he enjoys an 11-point lead in his quest for a 10th national number one plate.

But the tight and technical 1.93km (1.2-mile) 10-turn Autodrome St-Eustache is a tricky challenge for any racer. Last year Szoke became only the third rider ever to claim back-to-back victories at the venue, joining Steve Crevier, who won in 1991 and ’92, and Francis Martin, victor in 1999 and 2000. Szoke’s other win came in 2002.

The biggest obstacle between Szoke and St-Eustache history is no doubt Keene, Ont.’s Jodi Christie, who lies second in the Superbike point standings after a runner-up finish at Shannonville. The 21-year-old rider of the Jodi Christie Racing / Honda Canada / Accelerated Technologies Honda CBR1000RR scored his first career national Superbike pole at St-Eustache last year and will be looking to build on that as he tries to end Szoke’s Superbike supremacy.

St-Eustache is noted for producing an upset winner, however, and one of the underdogs to watch will be second-year Pro Trevor Daley on the One Speed Chop Shop / Z1 Cycletech Suzuki GSX-R1000. The Mississauga, Ont. racer scored his first career podium finish with a third at Shannonville last month.

The Autodrome also has a history of favouring Quebec racers, and there is no more likely candidate than Sebastien Tremblay. The Longueuil, Que. rider placed fifth at Shannonville despite development delays with his new MotoNation / Laval Moto Kawasaki ZX-10R, but he qualified on the front row at St-Eustache last year and has established himself as one of the Mopar series’ rising stars.

Christie will be aiming to regain the advantage on his Honda CBR600RR as he bids for a fourth national class crown, while other riders to watch will include Sarnia, Ont.’s Will Hornblower aboard the Hornblower Racing / Blue Streak Yamaha YZF-R6 and Daley, who makes his 2014 class debut with the ProStar Motorsports-entered Honda CBR600RR.

Jacob Shaw-O’Leary of Falmouth, N.S. comes into the weekend leading the Honda CBR250R class standings after a win and a runner-up finish in the Shannonville doubleheader aboard his Pro Cycle-backed entry.

…Three racers have scored their only career national Superbike wins at Autodrome St-Eustache. Montreal’s Marco Ferland did it in 1994, St-Jerome, Que.’s Benoit Pilon was the winner in 1996 and Jean-Francois Cyr of Ste-Adele, Que. managed the feat in 2003.

…Despite the one-off successes of Ferland, Pilon and Cyr, the Superbike result at Autodrome St-Eustache is a fairly reliable indicator of the outcome of the national championship. In 10 of the 15 years the venue has hosted at least one national round, a St-Eustache winner has also taken the Canadian title. That has also been the case for five of the last six years, the exception being 2003, when Pascal Picotte was champ but Cyr won at St-Eustache.