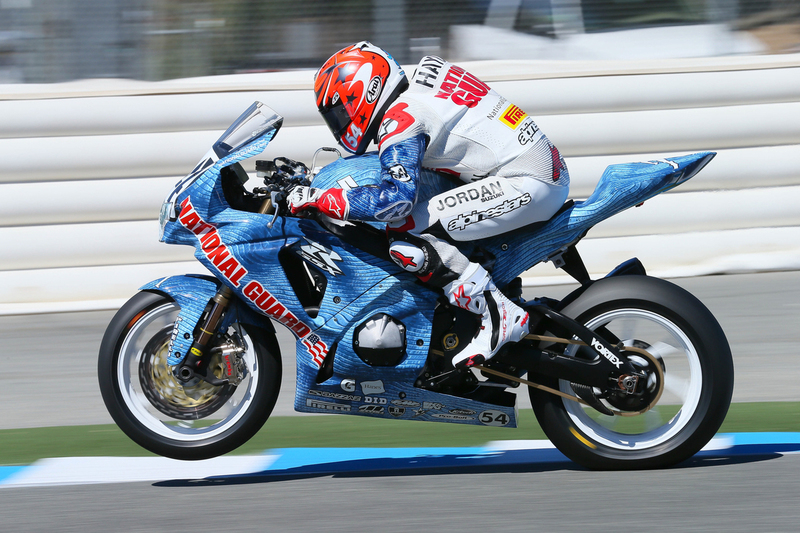 Michael Jordan Motorsports today announced that it is suspending operations of its AMA Pro Superbike team effective October 31, 2013, and will focus on transitioning to international competition as early as 2014. “We’ve decided to not move forward with our AMA Superbike program,” Michael Jordan Motorsports Corporate Relations Director Kreig Robinson told Roadracingworld.com Tuesday, “and that includes our 600cc program with Celtic Racing, as well. Of course all of that was sponsored by National Guard. National Guard will not be returning as a sponsor of Michael Jordan Motorsports nor as a sponsor of the AMA Pro Superbike class.” Robinson said there were two situations that factored into National Guard’s expected nonrenewal of its sponsorship: budget problems within the federal government and the current state of AMA Pro Road Racing. “[National Guard] were certainly having a very difficult time to justify to spend [based upon] the analytics, the numbers of the AMA Pro property,” said Robinson. “We certainly met all of our goals with the National Guard in terms of achievements, but it comes down to recruiters on the ground and the sheer number of people that get a chance to pass in front of them. When they’re not seeing a number of people pass in front of them they really have to take a look and say is this something we need to invest in from an event property aspect. “Then you take on an exposure aspect. The numbers just weren’t supporting, and I’m talking about television ratings, weren’t supporting the spending as well. “We hope that AMA Pro Racing can correct those issues because increasingly every day, and I think anyone in the paddock who is involved in acquiring sponsorship [will tell you], those are the two biggest items that most companies want to know. What are your television ratings? And what’s your live event like? When those numbers don’t work or don’t fit into [their] equation it makes it pretty difficult for those people to know what you’re doing. “We have no bad feelings toward AMA Pro Racing. This is where we are, where we’re from. We like the property. We don’t have any bad feelings toward anyone in particular, but the property as it stands right now doesn’t allow us to go out and get the sponsorship that we need. We saw what has taken place with the schedule for 2013. I suppose there is some sort of schedule taking shape for 2014, but here we are after the [2013] series has ended and there’s not really a [2014] schedule to speak of. And if you look at other properties, international series, domestic series, they have schedules out already. Other DMG-owned properties, like the United SportsCar series, their [2014] schedule is out. That’s what we need to be able to move forward and to know our costs. You can only imagine walking into a room and being asked: how’s live event tickets, how’s the TV, where are you going, how much do you want? It just doesn’t work. “As for the racing side of it, we think it’s been fantastic. We think the rules package, for the most part, is where it needs to be. It’s been good. In the 10 years that we’ve been participating with our effort we’ve steadily progressed and made our way to the front to where we were actually challenging for wins and podiums. I don’t think you can really ask for much more that that. “On our side, Michael Jordan Motorsports, without sponsorship like National Guard and especially with the late date of them not renewing, it’s forced us to take a look elsewhere in terms of what we’re going to do, how our business model fits best and what the future holds for us. We’ve been looking at international competition for the last three years simply because we felt this situation in AMA Pro wasn’t completely suiting our needs and what our goals were as a team. So because the National Guard sponsorship came along their requirement for that was obviously that we race domestically. Moving forward as Michael Jordan Motorsports, we’re looking at international competition. We’re looking at World Superbike, we’re look at MotoGP and all the different classes that are there and trying to figure out wha’st going to fit us best. “If you know anything about us, we do things on our own time, on our own schedule, and unfortunately we’ve had to make a decision that will temporarily affect some of our employees, and that’s the worst part about the whole thing. But Michael Jordan and Michael Jordan Motorsports remain committed to racing. There’s no loss in how much Michael Jordan enjoys motorcycles or motorcycle road racing. We’re a racing organization. We plan to go racing. It’s bye for now, but we certainly believe it’s temporary. “And I think at this point, at the end of October, you certainly cannot expect a race team like Michael Jordan Motorsports to hop right into a full season of World Superbike or MotoGP. That’s something that requires a great deal of planning and time to do. You can’t just jump over there. That wouldn’t be prudent to attempt. Hopefully, there will be a level of participation that we do get to do in 2014 to really prepare for a 2015 return for a full season of racing.”

MotoGP: Riders Planning For Rain This Weekend In Thailand