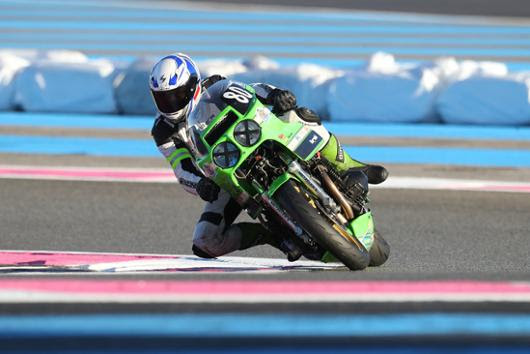 MUNICH, Germany – METZELER RACETEC™ RR, the ultimate sporting expression of the German brand and a street legal tire developed for, and successful in road racing, now expands its range with new 18-inch sizes in the K1 compound designed for classic racing.

In the new sizes, the RACETEC™ RR made its successful debut at the Bol d’Or Classic race that took place last Saturday and METZELER won by equipping the Kawasaki GPZ1100 led by Marcel Kellenberger and Stefan Merkens of the Bolliger Classic Endurance team.

The three new sizes are available in a specific K1 compound, the softest among those of the METZELER RACETEC™ RR, to ensure maximum performance on road and track, and further developed to ensure versatility and adaptability to the specifications of old machines.

In classic races, riders might compete on motorcycles that no longer perform like modern ones, but METZELER realizes that these powerful, rigid, heavy and valuable motorcycles still require tires with modern performance.

Classic races take place both on road circuits – such as the Isle of Man, where each year in August the Manx Grand Prix Senior Classic race is held with old superbikes from the 90s – and on race circuits, such as the prestigious Bol d’Or Classic.

In most countries, a motorcycle must be at least 25 years old to be considered vintage, while the category for classic motorcycles is usually intended for machines produced before 1972 and for post-classic, built between 1973 and 1985.

With the RACETEC™ RR now in the new 18-inch sizes, in addition to the existing 17-inch sizes, METZELER approaches classic racing focusing on high performance post-classic motorcycles. This approach provides riders with first-class dry performance and greater control over their valuable, ageing but still powerful motorcycles.

The benefits offered by all the sizes of the RACETEC™ RR are:

For classic superbikes, the RACETEC™ RR effectively tames the aggressiveness of these old machines by using the dampening features of the carcass and the tread band configuration.

The RACETEC™ RR rear is bi-compound, offering excellent grip in cornering as well as great stability at high speeds. Unlike its predecessor, all the sizes and compounds of RACETEC™ RR have the speed index W in brackets, which enables these tires to be used on public roads and not just on circuits.

RACETEC™ identifies the METZELER range of products dedicated to sport, while RR, defined as Road Racing, underlines the context in which this project was born. The RACETEC™ RR comes directly from the experience of METZELER in Road Racing competition in which the brand has been highly successful for many years.

RACETEC™ RR has been designed and tested in major events, such as the North West 200, Ulster Grand Prix, Southern 100 and especially the Isle of Man TT. These races take place on closed public roads and are very close to normal road riding situations. For this reason, METZELER chose these events as an effective test and development ground.

With substantial efforts in these activities, METZELER has been able to completely renew its sports range of tires. SPORTEC™ M7 RR was developed and launched followed by the new Racing Supersport RACETEC™ RR that now expands its tire range with the latest 18-inch sizes to further meet the needs of the classic racing.