Marquez, Pedrosa Ride And Drive Many Different Vehicles During Honda Racing’s “Thanks Day” At Motegi

Marquez, Pedrosa Ride And Drive Many Different Vehicles During Honda Racing’s “Thanks Day” At Motegi 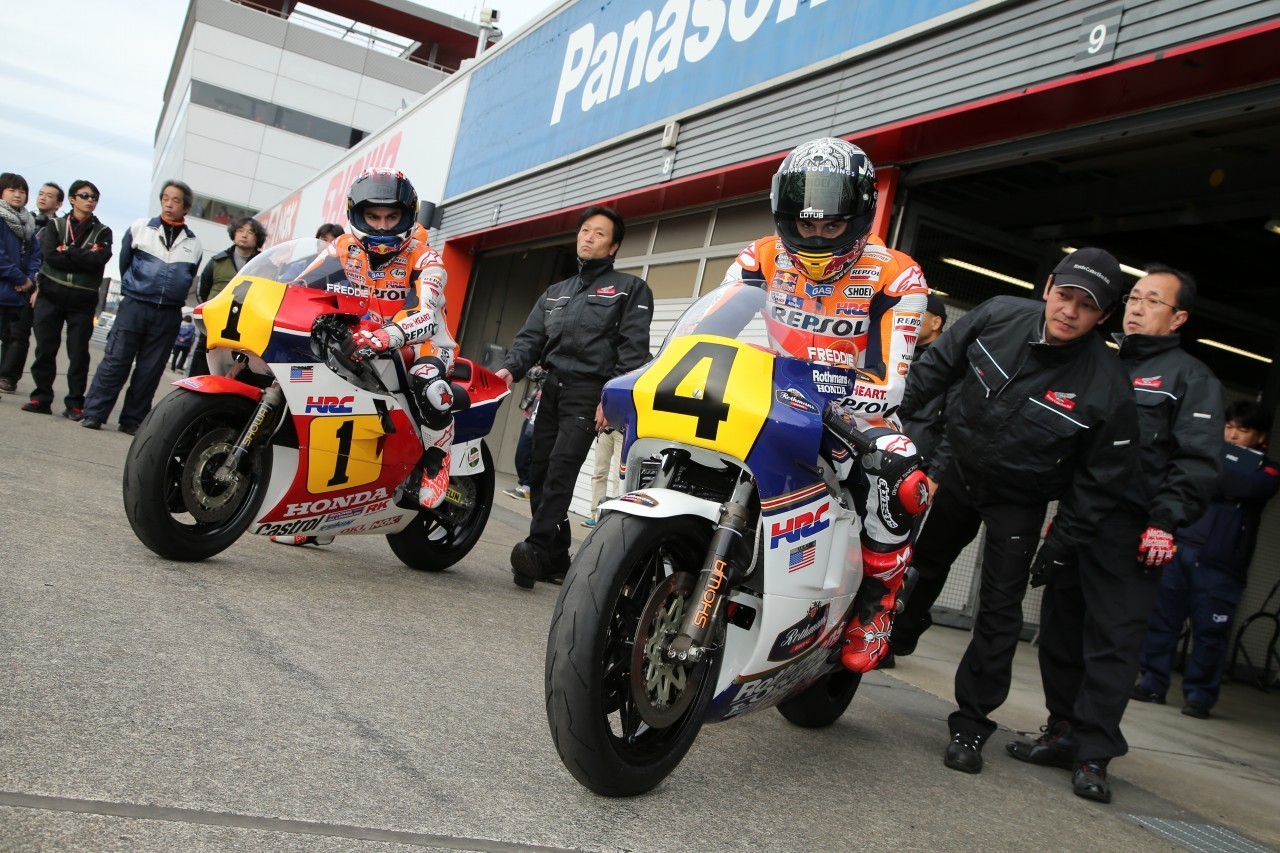 Repsol Honda’s Marc Marquez and Dani Pedrosa have visited Japan to give thanks to all the fans and colleagues in Honda, signifying the end of the 2015 season.

On Saturday, events moved to Motegi for some on-track action. After some test laps, the riders had Practice and Qualifying for the CBR250 Dream Cup, with Marc first and Dani second. Marc and Dani also had the opportunity to ride two classic NSR500 bikes – 1984 for Dani and 1985 for Marc. For both of them, this was the first time riding a 500cc 2 stroke machine and they were both very excited! They also drove the N-One car on-track in preparation for Sunday’s race. The day finished with them completing a few laps in the NSX Concept GT race car – with over 650bhp – which they enjoyed a lot.

On Sunday all the riders assembled for an action packed day in front of 18,500 spectators. Marc and Dani were joined by Formula 1 star Fernando Alonso and ex-F1 pilot Takuma Sato (now Indy Car series), Toni Bou, Takashisa Fujinami, Jaime Busto, Takumi Takahashi (Suzuka 8 hours Japan Superbike Championship), Hiroshi Aoyama and Kosuke Akiyoshi (HRC Test Riders), and ten drivers from the Super GT series (GT500) National Championship Super Formula. The day began with a Kart race followed by the CBR250 Dream Cup race (8 laps), where Dani and Marc started from the back of the grid finishing respectivly 1st and 2nd! They also enjoied the N-One Exhibition race (3 laps) this time with Marc first and Dani second, and concluding with an NSR500 demo lap and an exibition on board of their RC213V machines.

Fernando Alonso also had the opportunity to test the RC213V MotoGP bike on-track for the very first time, together with Marc again driving the NSX Concept GT car and exchanging their helmets at the end.

“Once again we’ve had a good time at the Honda thanks day! It’s a nice opportunity to meet the other HRC and Honda riders and have a chance to ride and drive many vehicles! Of course this included riding our MotoGP machine, but also the CBR 250, the new Honda NSX and the unbelievable NSR500! It’s been great to spend this time with the Honda family and I look forward to next year! This is the last event of the year for me and Honda, so I would like to wish a Merry Christmas to everyone and Happy New Year! Let’s hope 2016 is a good year for all of us.”

“It’s been a really good weekend! I had the chance to have some fun and behave like a kid once again, playing with some very special toys! We drove some great cars and also had a chance to ride the NSR500, whilst enjoying ourselves with other riders and drivers. It was good to hang out together, talk about our seasons and drive Honda’s new and old vehicles! I’d like to take this final chance to wish all our fans a very Happy Christmas!”