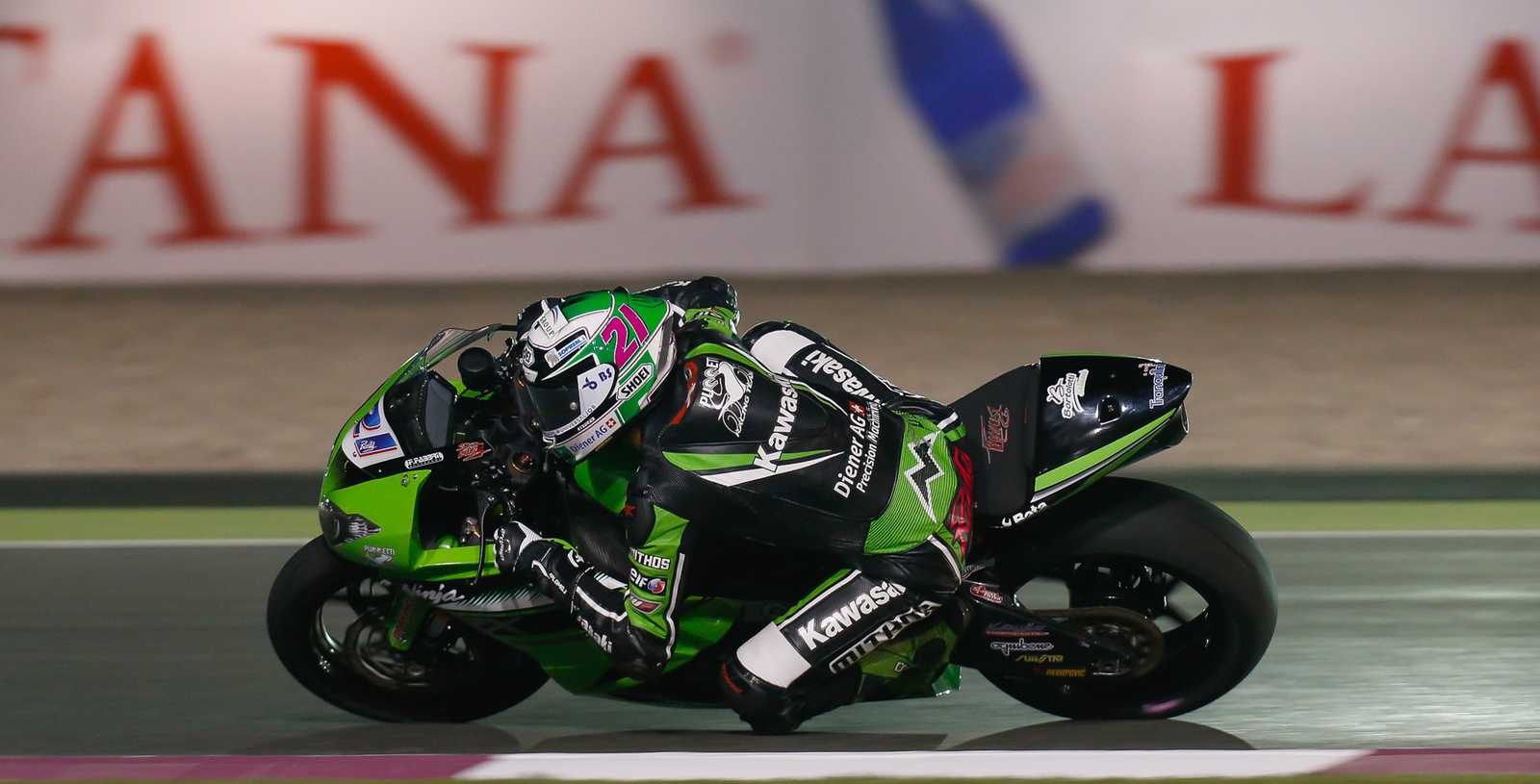 Krummenacher heads into the Gaerne Qatar Round fighting for second overall and by topping the timesheets in the combined standings on Friday evening, he cements his position as a serious challenger for the fight. Ayrton Badovini (GEMAR Balloons – Team Lorini) finished in second after setting times consistently in the top three throughout the session. Alex Baldolini (Race Department ATK #25) proved he’s back from injury and stronger than ever, setting the third quickest time of the evening.

The first half of the session remained steady with only the top two riders improving their times from the earlier session. Badovini was first to shake things up by briefly setting the fastest time, before Kyle Smith (CIA Landlord Insurance Honda) overtook him and improved on his combined time to lead until the half way mark. Newly crowned World Champion Kenan Sofuoglu (Kawasaki Puccetti Racing) soon joined the party, shooting to the top with his fastest time of the night and continued to lead, until the final minutes of the session saw times tumble rapidly as riders desperately fought to finish in the top ten.

Honda World Supersport Team’s PJ Jacobsen who is another challenger for second overall, finished in fourth proving he’ll be hard to shake off. Smith finished in fifth ahead of Sofuoglu in sixth, who wasn’t able to match the pace of the top five as he did in the earlier session.

The stars of WorldSSP will be under the spotlight once again on Saturday 29th of October for the Tissot Superpole qualifying sessions to decide the grid ahead of Sunday’s season finale.

More, from a press release issued by Honda:

Jacobsen starts off on the right foot in Qatar

The last round of the 2016 FIM Supersport World Championship began today under the floodlights of the Losail International Circuit in Qatar, with Honda WorldSSP Team’s PJ Jacobsen able to secure fourth place in the combined times of the first two free practice sessions. Therefore, the 23-year-old American rider has qualified directly to tomorrow’s Superpole 2, which will get underway at 18:55 local time (GMT +3).

After finishing second in the first free practice session, Jacobsen worked hard with his crew to further improve the set-up of his Honda CBR600RR for the 5.38 km long Qatari circuit; it was not until the final ten minutes of FP2, though, that the New York native was able to improve on his FP1 lap-time to a final 2’02.918s, which temporarily elevated him to the top of the timesheets.

Things went really good today. We could have been even further up this afternoon, but we decided to try a different tyre that unfortunately didn’t give me the right feeling. We are definitely going back to what we know works well and I’m pretty sure we can put up a good fight in Superpole. Lately I’ve always been much further back at the end of day one, so this is definitely a good sign ahead of tomorrow. Usually this is not my favourite track, but I must say that I had a lot of fun today.

It was overall a good day for PJ. We tried a different approach to the two sessions: we made only few small changes to the setup and focused mainly on doing as many laps as possible. In the end it worked out really well: he improved massively, in the morning and especially in the afternoon. Everybody is really close, but some of our rivals appear to be quick only on the single lap. There is still room for improvement, so we are really confident.

More, from a press release issued by MV Agusta:

In WorldSSP, Jules Cluzel did a great start for the FP1 session, managing to finish in 3rd place, only 0.3s far from the leader Kenan Sofuoglu. In FP2 the French rider wasn’t able to replicate the excellent afternoon’s performance but managed to closes in 8th place, entering the Tissot-Superpole2.

After winning the Italian Supersport Championship a few days ago, Massimo Roccoli joined the MV Agusta Reparto Corse Team for this last round of the WorldSSP Championship. The Italian rider – who had already raced in Qatar in 2014, always in WorldSSP with Team MV Agusta Reparto Corse, closing in Top10 – decided to focus on establishing a good feeling with the new bike and the new team, finishing in 18th position at the end of the day.

Jules Cluzel #16 WorldSSP – This morning we started very well and I found a good feeling with the bike. Unfortunately, in the afternoon we had some more problems and we stepped down till the 8th position. The guys on the team are working hard on the bike and tomorrow I will do my best to get a good placement in Superpole2.

Massimo Roccoli #52 WorldSSP – Let’s say I’m struggling a bit ‘longer than expected, because this bike is very different from the one I rode in the Italian Championship and I need time to get used to it. Moreover, Losail circuit is definitely not an easy track. We are working hard for tomorrow and I hope to get close to the score- points position.