Kawasaki World Superbike Rider Tom Sykes: There Are More People Looking At Us This Year To Deliver

Kawasaki World Superbike Rider Tom Sykes: There Are More People Looking At Us This Year To Deliver 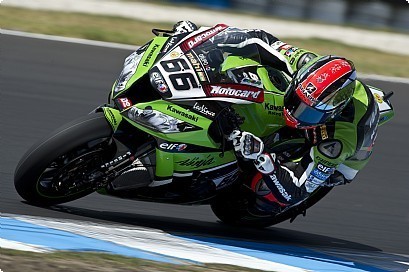 Nothing Succeeds Like Success After coming so close to winning the FIM Superbike World Championship in 2012 the entire Kawasaki Racing Team is the focal point of increased public awareness and expectation in 2013. With two proven race winners, one of whom came within half a point of securing the championship outright last year, and an even more highly developed Ninja ZX-10R SBK machine to work with, the official Kawasaki Racing Team effort for 2013 has found itself in the spotlight over the winter months, and at the recently completed first round in Australia. With a new team setup in the SBK category in 2012, as the Spanish-based Provec squad moved on from a successful period in the Supersport World Championship class, it could have been seen as a form of learning experience. It was a true education in many ways but the learning was done so adeptly, the bike development programme delivered so well and the qualifying and raceday performance by the experienced Tom Sykes were so impressive that Sykes and his Ninja ZX-10R came to within half a point of the championship. He won four races, scored nine poles and 13 podiums in all – a vast improvement on 2011. With the then teenage French rider Loris Baz also winning a 2012 SBK race during his first taste of action at this high level of competition, KRT were obviously doing not just one thing, but many things, correctly. The result was a great increase in not only awareness of the effort at that time, but in focus and expectation from media and public alike for the 2013 season. For Sykes, Provec and Kawasaki, KRT’s official racing project is already being conducted in the same effective way as before. Fourth overall for Sykes – despite riding with a broken wrist and three cracked ribs at round one – was a fine result at the start of a 15-round season. The whole KRT effort is, unquestionably, enjoying more attention than ever before. What effect has this had on the team so far, if any? For Tom Sykes, a rider who gets his head down and the work done in the garage and on track, increased attention is just the natural consequence of all 2012’s successful teamwork. “We did a lot of good work between testing and racing last year,” said Sykes. “I have stuck at the job with the bike and the team and we have put it in the ballpark at the top level.” Sykes has now reached a kind of folk-hero status to many SBK fans all over the world in the way he rode so well to almost become champion last year. In a way that is so typical of Tom, a degree of modesty hides his usual steely determination to win in 2013. “I feel that it is great to be acknowledged and that people are getting behind Kawasaki and me now. I have had some difficult years before then and maybe last year caught some people by surprise. It was a big step up and certainly there are more people looking at us this year to deliver. We will quietly work away and see what we can make happen.” For KRT Manager Guim Roda, 2013 will be a case of more of the same kind of work and approach that was so effective last year. “At the end we are approaching our job the same as always,” said Roda. “We just have to carry the responsibility to have this extra pressure. More people are expecting something from Tom and us. We must not lose the focus, continue working well and working hard and we are sure results will come, which is what people expect from us too. It is a pleasure and an honour to take the responsibility to be a reference and show our best way of working. In the future others can copy and try to be better than us but then we will work harder to be better than them and learn to be at the top all the time. That’s life in racing.” Steve Guttridge, Kawasaki’s European Race Planning Manager, is another looking forward to an even more successful year. He is particularly pleased that the performance of the team and the Ninja ZX-10R as a full SBK machine which has clearly matched the capabilities and prowess of the awesome road bike version. “It was clear that from the very first race last year that our formula to put the Ninja ZX-10R at the front of WSBK was working and, importantly, was going to work for the longer term too,” said Steve. “Despite being new to the Superbike class, as a team manager Guim Roda was already fully up to speed as to how we at Kawasaki work, having successfully run our official WSS team for the past few seasons. Then, technically speaking, we could benefit from KHI’s Yoda-san fully focusing on detailed improvements inside the team operation. Since he was now based back at the factory he could explain face-to-face to the engineers exactly what was needed in order to keep improving the performance of the race bike at this level. Then, finally, with Tom we had a rider with experience of the Ninja ZX-10R package and the speed to show just what it was capable of! He has a strong trust in Kawasaki and Kawasaki in him. All the pieces of the puzzle came together, as they say,” said Guttridge. “Now we have to cement our place as a regular contender for the WSBK title. This is when everyone has to work even harder but I’m not worried because I know the quality of people we have in the project and none of them are shy of the hard work needed to become the champions in 2013.”