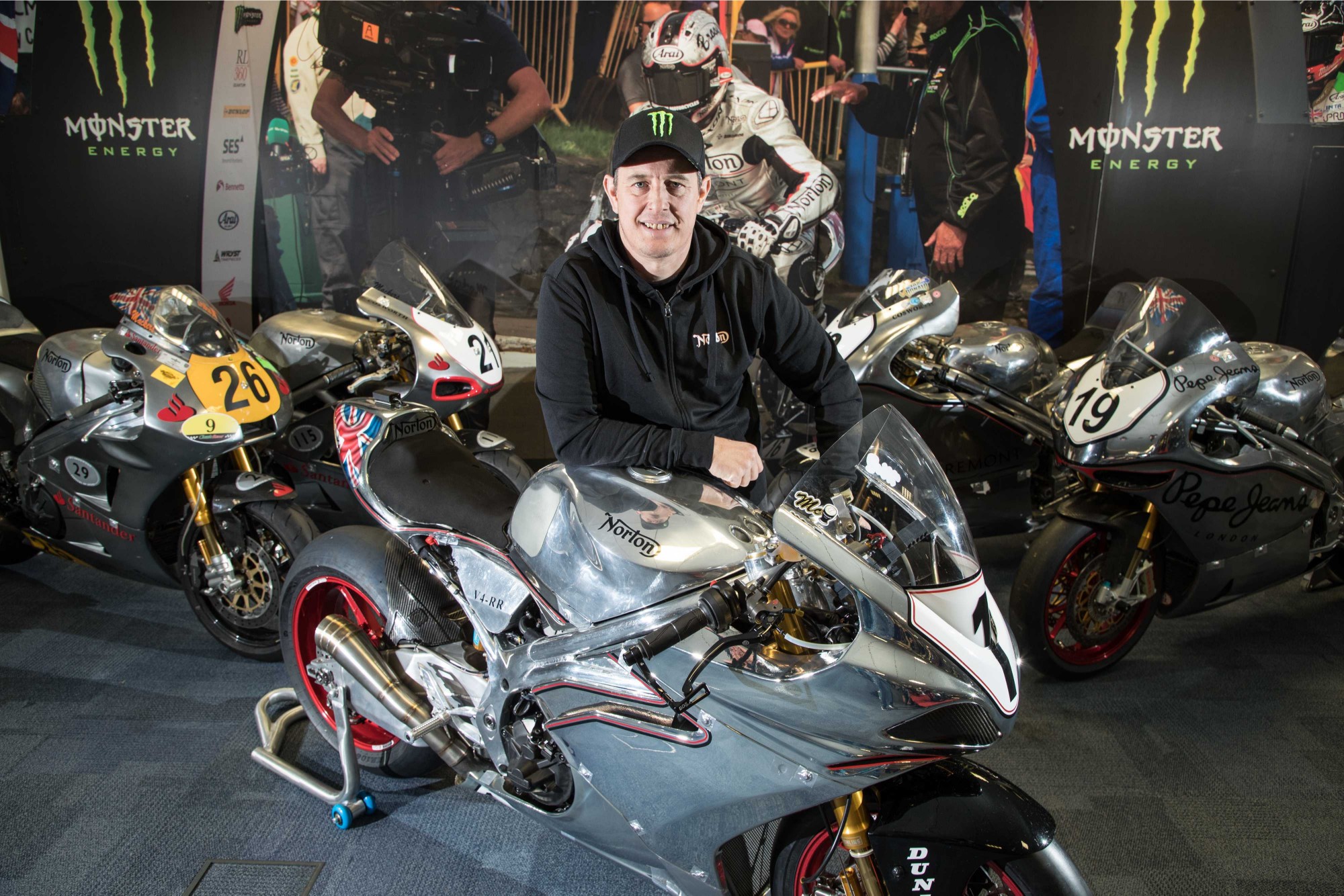 23-time TT Race winner John McGuinness has signed to ride for the Norton factory team in the RST Superbike and PokerStars Senior TT Races at the 2018 Isle of Man TT Races fuelled by Monster Energy.

McGuinness last won a Superbike class race in 2015, winning the PokerStars Senior TT, which also saw him breaking the outright lap record with a lap of 132.701, which remains his fastest lap around the Mountain Course. He achieved podiums in both the 2016 RST Superbike and PokerStars Senior TT but missed last year’s TT race meeting due to serious injuries sustained in the North West 200, which he is still recovering from. However, he expects to be back to full fitness in time for his TT debut with Norton this June.

McGuinness has enjoyed a remarkable TT career and is second only to Joey Dunlop in outright TT victories and is rightly considered as one of the all-time TT greats. In a career that has now stretched over twenty years, he first announced himself to the road-racing world in 1996, finishing the highest placed and fastest newcomer in the 250cc TT Race and his name has since become synonymous with the Isle of Man Mountain Course.

He has stood on the Isle of Man TT podium a record 46 times from 78 race finishes and is confident that more success is just around the corner now he has teamed up with this iconic British brand.

Talking about the news of his Norton signing John McGuinness commented:

“I didn’t want to end my career due to an injury, but the truth is I didn’t know whether I would be able to come back as I didn’t know how fit I was going to be. Right now, things are going well. I feel a lot sharper and my head is in gear and ready to go. The plan is to get the external fixator cage off my leg by the end of this month and after that we can start working towards getting bike fit and testing.”

“I’m definitely ready for a change of manufacturer. I needed an injection of enthusiasm and I’ve found it with Norton. From the first time I met with Stuart (Garner) the vibe was there and the passion. I watched Steve Hislop win the TT on the Norton in 1992 and it was massive. Everyone remembers that! We can’t get carried away, it’s going to be a big job but I’ve watched a lot of YouTube videos of the bike in action, I watched the bike out on track last year and it’s clearly a very fast and capable bike and I can tell you there are worse handling bikes out there too, so there’s no reason we can’t do the business if the stars line up right.”

“We’ve been talking to John for a year or more, he’s the talent. He’s the man at the TT with the total experience, the results and the pedigree. We have the ambition to win the TT and to go on to develop a really strong team in years to come. We’d got John in our sights for a long time.”

“To get John in the Norton team with his experience and knowledge available is fabulous. Norton will seize the opportunity to get John involved in all aspects of the bike – he’s a huge asset to Norton. Everyone in the factory has got a huge buzz. It’s pretty special. We’re all looking forward to the TT but we’ve not set any targets and take nothing for granted. Putting John McGuiness and Norton together is a dream team, but we know all results at the TT are hard earned whatever your name.”