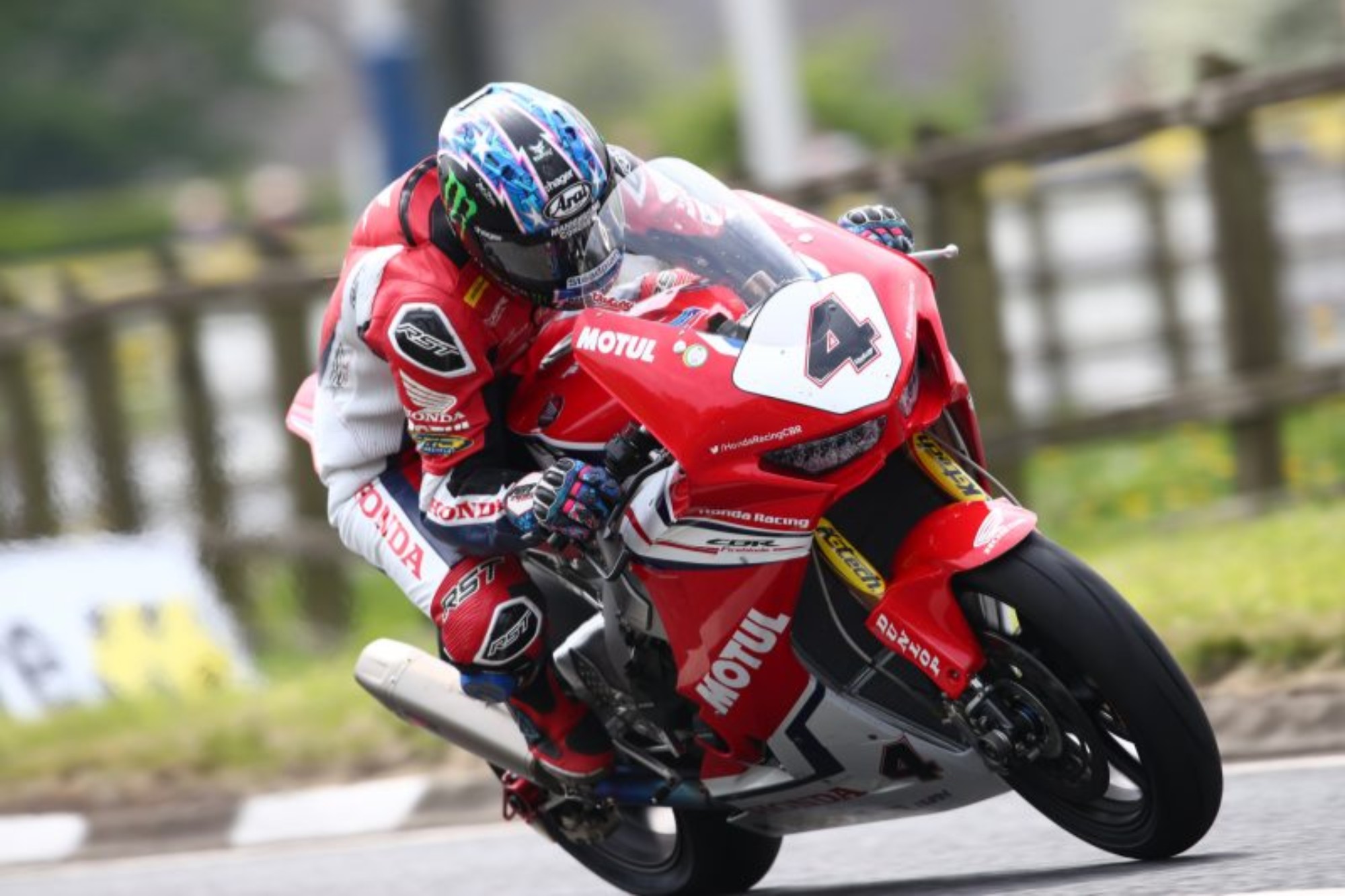 Honda Racing focused on the Isle of Man TT races

Fresh from the International North West 200, the Honda Racing team is preparing to head to the Isle of Man for the legendary TT races, where Ian Hutchinson and David Johnson will contest the World’s fastest road race on Honda CBR machinery. The TT fortnight starts this Saturday (25 May) with the first sessions at the 37.73-mile Mountain circuit.

The TT races will dominate the next two weeks, which for most is the highlight of the road race season, where riders will tackle the gruelling Mountain course across six categories and nine races. The Honda squad will be taking part in five races across the event, with the CBR1000RR Fireblade SP2 in the Superbike, Senior TT and Superstock races, and the CBR600RR in the two Supersport races.

Hutchinson is amongst the most successful riders that have ever tackled the Isle of Man TT. The ‘Bingley Bullet’ has 16 TT wins to his name and will be looking to further add to his tally. ‘Hutchy’s’ relationship with Honda has already proved to be a successful one at the TT, as his unmatched record of five wins in a week in 2010, was all aboard Honda machinery.

Teammate Johnson will also be looking for a podium finish at this year’s event, something that has eluded the Australian rider since his debut in 2010. Missing out on the podium by fractions at last year’s races, ‘Davo’s’ personal best lap of 131.595mph places him 12th in the ranking of fastest laps at the Mountain circuit.

Honda will be celebrating at this year’s TT, as 2019 marks the Japanese manufacturer’s 60th anniversary racing at the event. In 1959 – five years after his initial visit – Soichiro Honda returned to the TT races with a full racing team. Since its first race, Honda has amassed a total of 183 wins across all classes, making them the most successful manufacturer ever, at the TT.

The Milenco by Padgett’s Motorcycles team will also be looking to continue their good form after collecting a win and two further podiums at last week’s International North West 200 races. Davey Todd took his first-ever international road race victory in the Supersport class aboard the CBR600RR, with teammate Conor Cummins completing the podium in third. Manxman Cummins also placed third in the Superbike race aboard the Fireblade. Michael Dunlop will also pilot a CBR600RR in the Supersport class, with his own MD Racing team.

The opening session gets underway on Saturday 25 May, with Supersport and Newcomer laps only. From Monday 27 May through to Friday 31 May, every evening qualifying for all classes will take place. The first race will be the six-lap Superbike on Saturday 1 June, with Supersport 1 and Superstock on Monday 3 June and Supersport 2 on Wednesday 5 June. The six-lap, blue riband Senior TT closes the TT fortnight on Friday 7 June.

It’s not really been the start to the season we were hoping for with the North West 200 and the disruptions to the schedule there, so I am glad we don’t have long to wait until we’re at the TT. After the NW I am feeling good, but I just want to get going now as I felt we didn’t really manage that last week. I had a sixth in the Supersport race and had started to chase third in Superstock before we had a small technical issue, so the pace is there, we just need some luck and good weather. The TT holds good and bad memories for me, but I want to put the bad behind me and focus on racing and doing what I know I am capable of doing. I don’t like dwelling on the past and the injury, I’m fixed now and I just want to concentrate on the 37.73 miles ahead of me each night and fighting for the best results we can.

After a bit of a disaster at the NW200, I am now very much looking forward to the TT. I had a nasty crash in Qualifying at the NW in the Supersport class and it put me out of the races, but before that we were making progress and getting some good data with all machines. I am still pretty bruised up, but I will be 100% on the bikes when we get going this weekend. I’ve not ridden these bikes at the TT before, but they’re going to be good fun I think and I just want to get going now. Coming from the NW200, which did not go to plan for us, it makes you want to race even more and I really can’t wait for the first night of practice and that tap on my shoulder! Last year I was so close to the podium and this year I am fully looking towards that. The guys in the team have worked so hard in the pre-season and also at the NW, so I really want to be able to reward them and also myself standing up there. So during the week it’ll be head down, focus and get fully prepared to go racing!

We have put in a lot of work in the pre-season and it’s paying off at the moment. Both riders are going really well and as such expectations are high for both of them and that’s not only from the team, but from themselves too. We are looking forward to getting out on track and showing what we can do. This year is an important year for Honda at the TT with the 60th anniversary, so I hope we can celebrate this across the board, not only with it being the 60th year, but also back up there on the podium with Ian and Davo. The competition will be strong this year, especially with last year’s lap times and results, so it’s not going to be an easy task, but I am confident with the packages we have we can be competitive and up there with the front group.