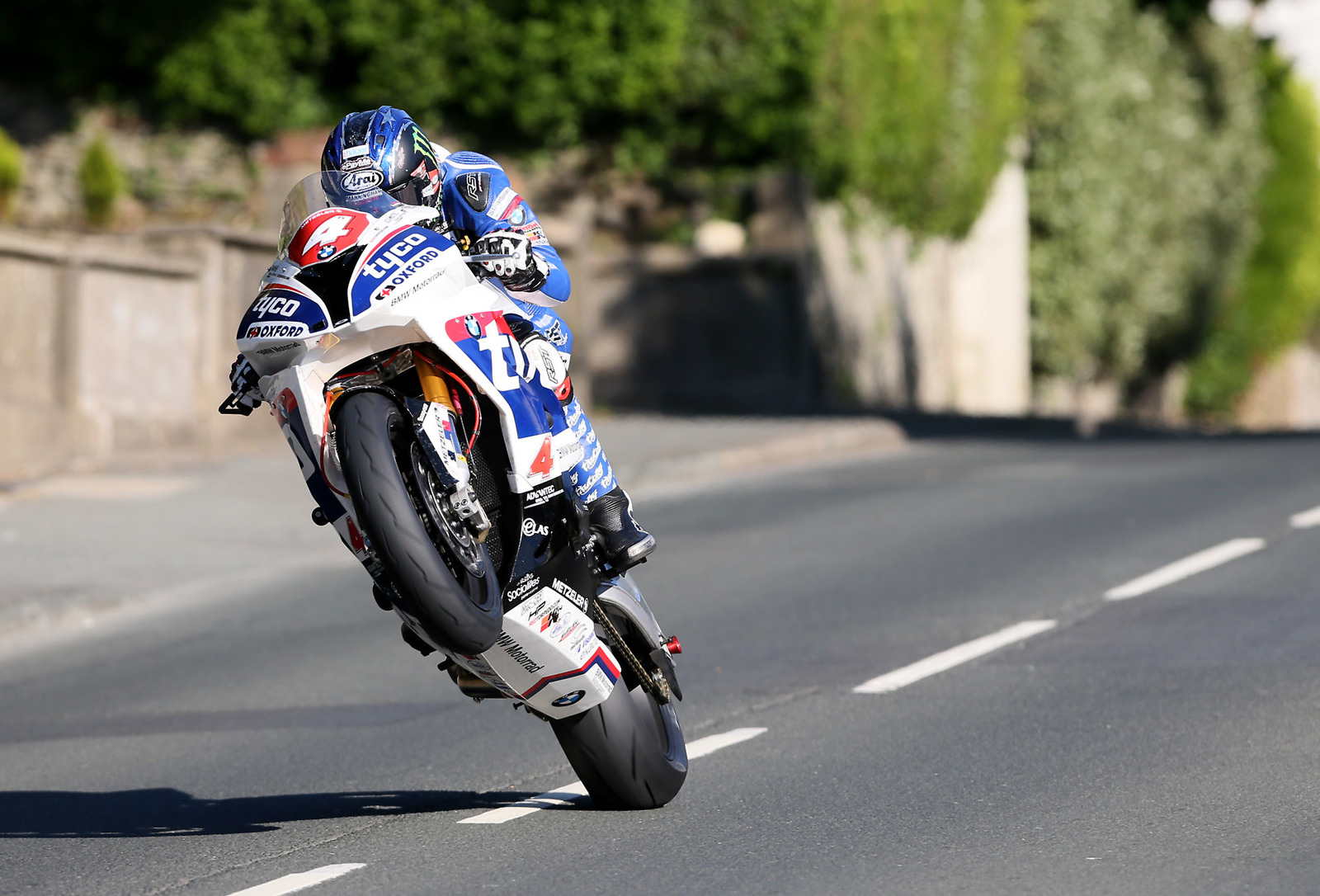 For the sixth successive evening, conditions were perfect for the final night’s full qualifying session at the 2016 Isle of Man TT races, fuelled by Monster Energy, and it proved to be the fastest session ever witnessed around the Mountain Course as Ian Hutchinson lapped inside John McGuinness’ outright lap record – on his Superstock machine!!

Hutchinson was at record breaking speeds from the off and, using his Tyco BMW Superstock, he lapped at 131.632 mph from a standing start, which was comfortably inside the class lap record and quicker than Michael Dunlop’s lap the night before. However, his second lap was simply sensational as he lapped at 132.803 mph, 0.786s quicker than McGuinness’ time set in last year’s PokerStars Senior TT race.

And despite it being the night before the first race, it was also a record-breaking evening for Michael Dunlop as he too was inside the outright lap record lapping at 132.754 mph on his Hawk Racing BMW Superbike. He then jumped on his Superstock bike to post a speed of 131.632 mph.

The session started promptly once more at 6.20pm with James Hillier and Hutchinson the first two riders to get away, soon followed by Steve Mercer and Gary Johnson, Michael Rutter and Martin Jessopp, and Bruce Anstey – none the worse for his spill on Thursday – and Peter Hickman.

Dean Harrison was one of the few front-runners who elected to go out on his 600 with John McGuinness in the 11th pairing away, intriguingly just behind Dunlop. However, Hickman was soon back at the paddock, clearly having pulled off the course early on.

Hutchinson was blazing a trail on the road, leaving starting partner Hillier some 30 seconds behind and the Bingley rider was first back to the Grandstand with a stunning speed of 131.632 mph, comfortably inside Dunlop’s Superstock lap record of 131.220 mph set in 2013.

Dunlop had a relatively slow lap at 124.806 mph but Harrison was flying on his 600, lapping at 126.249 mph to go to the top of that particular leaderboard. David Johnson also set a new fastest lap on the Norton with his opening lap of 128.533 mph while he was also fastest through the speed trap at 194.5 mph.

Second time around, it was clear both Hutchinson and Dunlop were on record-breaking pace and their lap times were only 0.375s apart although Hutchinson’s lap on his Superstock bike was the one that truly stunned the watching crowds and send shockwaves through the paddock.

Harrison went back out on his Superbike to post a lap of 129.996 mph with Rutter putting two more laps in excess of 129 mph, the quickest being 129.613 mph, the duo going third and fourth on the Superbike leaderboard for the night.

Jochem van den Hoek was again the fastest newcomer, improving his speed to an impressive 121.06 mph, but Seamus Elliott and Alessandro Polita were also going well at 118.75 and 117.95 respectively. Michael Booth also improved considerably, with his best lap being 116.65 mph.

The scene is set for a thrilling RST Superbike Race, the first race of the 2016 Isle of Man TT Races fuelled by Monster Energy which is scheduled to get underway at 11am (GMT).

You can follow all of the qualifying and racing around the Mountain Course via the live timing and live Manx Radio commentary which is available via iomtt.com.

More, from a press release issued by Honda:

Honda Racing in the mix at the Isle of Man TT

This week the 2016 Isle of Man TT races kicked off with glorious conditions around the 37.73-mile Mountain circuit. Honda Racing’s John McGuinness and Conor Cummins have finished the week’s practice third and fifth fastest aboard their Honda CBR1000RR Fireblade SP machines.

With near-perfect conditions every day since practice started on Saturday (28 May), the Superbikes first took to Glencrutchery Road on Monday with early impressive lap times from the Honda duo.

Continuing to mean business throughout the rest of the week’s practice and in preparation for tomorrow’s six-lap RST Superbike race, McGuinness, while on a flying lap in Thursday’s session, clocked a 131.12mph lap. Team-mate Cummins was just outside the 130mph barrier, posting a 129.99mph lap.

Tonight’s final session saw the pair run race engines ahead of tomorrow and concentrate on feeling with both Fireblade machines; McGuinness completed one lap, while Cummins put in a second lap after making a small suspension change. At the end of practice McGuinness finished third fastest overall and Cummins fifth.

The six-lap RST Superbike race is scheduled for tomorrow (Saturday 4 June) at 11am.

The key thing this week has been the excellent weather that we have had here on the Isle of Man, the first time in over ten years, which has allowed us to try everything we have needed to. We have had no problems with the Fireblades and it’s been a case of final adjustments, we do a lot of our testing and set-up before we get to the TT with our pre-season test programme and we’ve had the North West 200 so we had a basic setting for both machines before we arrived. Both John and Conor are happy with how the week has gone and we’re in the ball-park, we’re in the top-six and of course the grid positions are already decided by the start numbers. The main thing is that everything has run smoothly and we’re in a strong position with both riders ahead of tomorrow’s Superbike race.

We’ve had practice every night this year and have managed to get some really solid laps in during each session. Everything has been working faultlessly and we’re in the mix, I did a lap time of 131.1mph yesterday, which isn’t as quick as the other two but I’m happy with that and we’re in the ball-park. We’ve to do six strong laps tomorrow and have two good pit stops for the race and hopefully we won’t be too far away. I’m feeling confident and relaxed and looking forward to the race.

I’m happy with how tonight has ended, I think we’ve found a good setting with the Fireblade now, I had originally planned just to do one lap tonight, but with the small change we made I went out again and am happy with where we are now. I think we can now go forward tomorrow and stick in some good laps! Full credit to my team who have been working so hard to give me the right package with the Fireblade and I’m now just looking forward to getting out there for the race and doing those six laps.

Editorial Note: Use the zoom and scrolling tools in the...
Read more
MotoAmerica