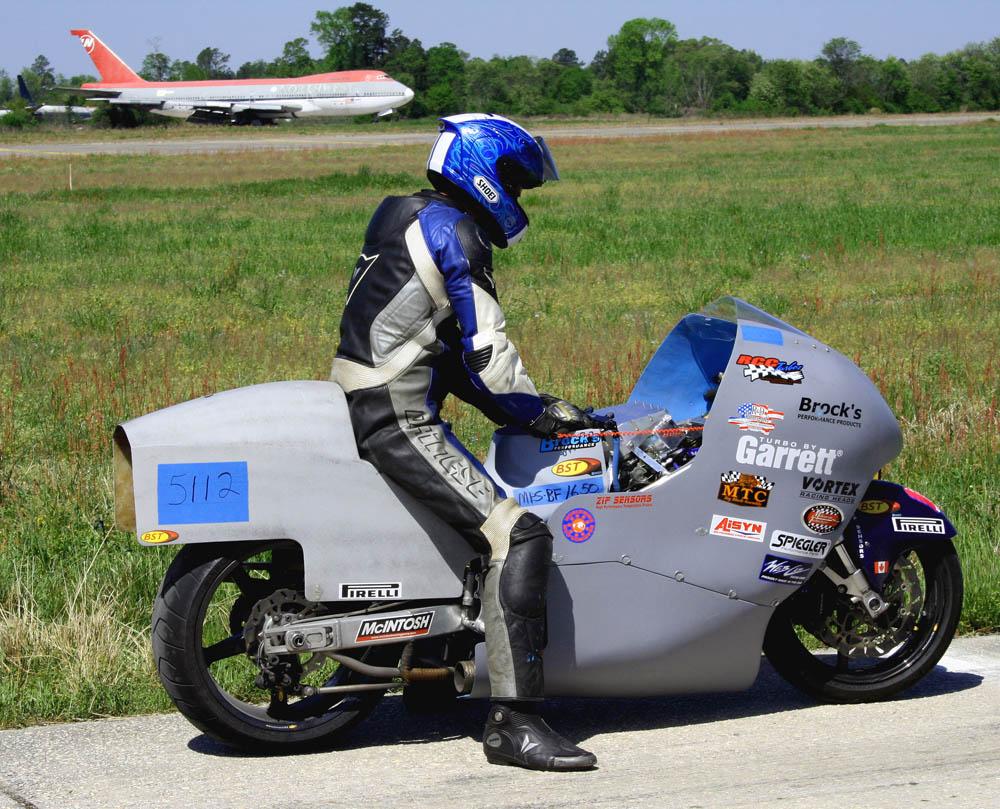 272.340 MPH: WORLD’S FASTEST STREETBIKE SETS MAXTON MILE RECORD ON BST CARBON-FIBER WHEELS DAYTON, Ohio. (April 13, 2010) Claiming the title of “World’s Fastest Streetbike,” Wild Bros Racing’s Bill Warner rode into the record books at the East Coast Timing Association’s Maxton Mile on April 11 with an astounding 272.340 mph pass in the standing mile. In preparation for Maxton, Warner, 41, a tropical fish farmer and marine biologist from Tampa Bay, Florida, went to a Texas Mile event two weeks earlier, stripped the bodywork off his turbocharged, 1298cc Suzuki Hayabusa and made two 255 mph passes””the fastest unfaired, naked-bike runs ever recorded””at one point data logging a rear-wheel speed over 308 mph as the tire spun trying to harness more than 600 horsepower. Setup dialed in, Warner and his team arrived at the all-concrete, one-mile course on a former air base in Maxton, North Carolina, planning his weekend record assault using the 253 mph MPS/BF-1650/4 class record as his target. Warner’s third run on Saturday, a 257.604 mph pass, did the trick, but there was more to come. On Sunday, he posted a pair of 256 mph test runs in the morning with stock body panels before Shane Stubbs upped the ante, and the nearly five-year-old fastest-streetbike record previously held by Lee Shierts at 260.288 in the MPS/BF-3000/4 class, with a 264.375 mph blast. “I was excited for him,” says Wild Bill, “but Shane went a bunch faster than I expected him to go, so I reached in my bag of tricks.” Warner pulled out three key ingredients to a better run: a leaner air-fuel mixture (“Because leaner is meaner in turbo racing,” he insists), two pounds more turbo boost in top gear and a set of top-secret, custom bodywork. “I figured that one of two things were gonna happen, either I would have to shut it down early or I’d put in a really good run,” Warner continued. “You get really motivated in these situations. I stayed in the throttle and kept the bike straight up, charging forward.” This little bit of inspiration is all he needed to post his 272.340 mph run””obliterating the class and track records, making this ‘Busa the fastest vehicle ever run at Maxton. Warner was so motivated and charging forward so quickly that he failed to get the bike slowed down in time for a corner halfway through Maxton’s shut-down zone: “My timing was off because I was traveling so much faster, it caught me a little off guard. I went in at the wrong angle and hit the third traffic cone at 167 mph.” This ripped off the front fender and damaged his hand-built bodywork, which took 300 man-hours to perfect, but didn’t wipe the smile off his face. Fellow land-speed-record-holder Paul Livingston was blown away by Warner’s accomplishments: “I was shocked and excited to hear about Bill going 272 mph,” says Livingston, “but what knocked us on our asses were the 255 mph naked runs. This makes him a hero””even among the hard-core land-speed guys.” Brock’s Performance President Brock Davidson put a lot of homework into finding the right land-speed team to sponsor. “We can design, create and supply the greatest parts we know how to produce,” he says, “but we have to provide them to people who know how to set up a motorcycle, do the proper testing, read the data and move forward intelligently. Bill’s drive, determination and ability””on and off the bike””are the reasons we chose Wild Bros Racing. And he killed it.” In addition to supporting such land-speed efforts, Brock’s Performance is reaching out to AMA Dragbike, MIROCK Superbike dragrace and WERA Motorcycle Roadracing series competitors with nearly $118,000 worth of contingency awards in 2010. Racers using various Brock’s Performance exhaust systems and BST carbon-fiber wheels are eligible. For more information on BST wheels, Brock’s Performance exhaust pipes, other sportbike performance parts and the company’s contingency programs, go to BrocksPerformance.com. The record-setting bike, a first-generation Hayabusa, was set up with products and technical support from the following sponsors: BST, Brock’s Performance, RCC Turbos, Garrett Turbo Technologies/Honeywell, Ward Performance, R & D Motorsports Inc., Ohlins USA, Pirelli Tires, MTC Engineering, Worldwide Bearings, Knecum Performance Engines, Web Cam Inc., McIntosh Machine and Fabrication, Aerospace Lubricants, Inc., Spiegler Performance Parts, Heads Up Performance, Falicon Crankshaft Components Inc., Millennium Technologies Inc., Power-Coat, Zip Sensors, Helmet House, Larry Forstall Racing, AiM Sports LLC SE and Crower Rods.