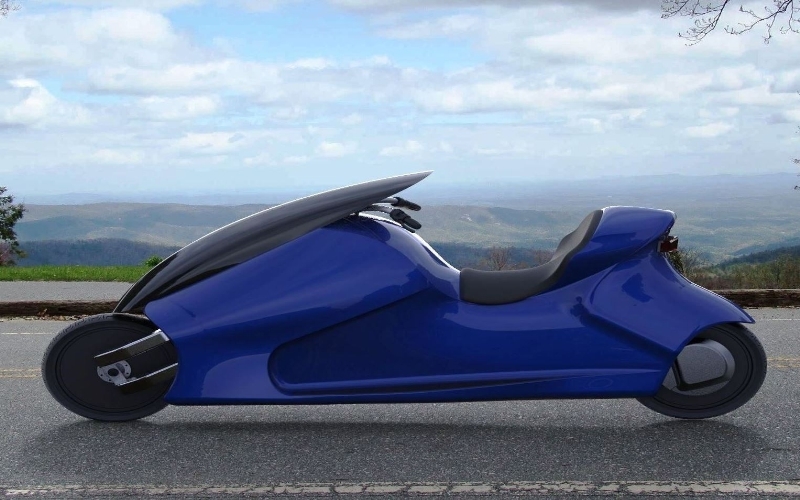 Thrustcycle Enterprises LLC is excited to announce the debut of a new prototype of the GyroCycle, a revolutionary self-balancing electric motorcycle. With its first model scheduled for production in 2017, Thrustcycle aims to be the first company to bring a self-stabilizing gyroscopic motorcycle to market.

“The GyroCycle is an energy efficient vehicle with rock solid stability,” said company President Clyde Igarashi. The core technology behind the GyroCycle has broad implications for safety and sustainability.

Safety Innovations
Thrustcycle’s internal flywheels create a gyroscopic effect that ensures the bike will remain upright and stable both during the ride and at standstill when powered up. Because their system maintains a fixed plane in space, the vehicle will be less likely to slide under and lose traction when going into turns because the gyroscope will maintain lateral integrity. The self-balancing function gives the rider more control and greatly increases safety.

Competitive landscape
Although Thrustcycle aims be the first to bring a gyroscopic motorcycle to market, other major players are emerging. BMW recently debuted the Motorrad Vision Next 100 concept motorcycle, which features a self-balancing system said to provide stability while at a standstill as well as when in motion. According to BMW, beginners will benefit because their cycle cannot fall over, while more experienced riders will enjoy the benefits that come with the improved agility that their self-balancing system provides.

“These are the concepts that Thrustcycle has been promoting for a while now,” said Igarashi, “and we are eager to demonstrate them with our GyroCycle. We’re further encouraged by the announcement that Lingyun Intelligent Technology, based in Beijing, is also entering the gyroscopic vehicle technology race. We see the entrance of large competitors as vindication of the potential in technologies that we’ve developed for years.”

Price Point and Industry Trends
While the price for the limited run in 2017 has not been finalized, Thrustcycle anticipates it will be under $20K – and significantly lower in the future.

While Motorcycles and scooters currently occupy a small market share in the U.S., they have enormous market potential in Europe and Asia. A report by QY Research reveals that in 2015, about 38 million units of electric motorcycle and scooter were sold worldwide, generating revenue of $13 billion. According to an analysis by Navigant Research, that figure is expected to grow as battery costs decrease.

Applications of core technology
Thrustcycle also plans to debut an enclosed gyro-stabilized vehicle in the near future. As demonstrated by a video on their website, rather than merely dampen oscillations as gyroscopes function on oceangoing ships, when the cycle is hit with force from the side, it will slide but remain firmly upright.

While Thrustcycle is currently largely self-financed, the company will be looking at more options, including possible licensing of the core technology, after they bring the first model to market.

About the Thrustcycle Team:
Co-founder Clyde Igarashi, who holds an MBA in finance from New York University, first met co-founder David Ryker nine years ago while working on an energy storage project. Both were interested in green technology and building cleaner, more energy-efficient vehicles.

“When David started telling me about this enclosed two-wheeled motorcycle he made in the 90’s (which he called Gyro Hawk), I was intrigued by the idea of not only making transportation more efficient, but also making motorcycles safer”, Igarashi said. “We decided that the idea was worth revisiting and formed Thrustcycle Enterprises.”

Thrustcycle Enterprises LLC is based in Honolulu, Hawaii and its prototypes are manufactured in Wilsonville, Oregon.