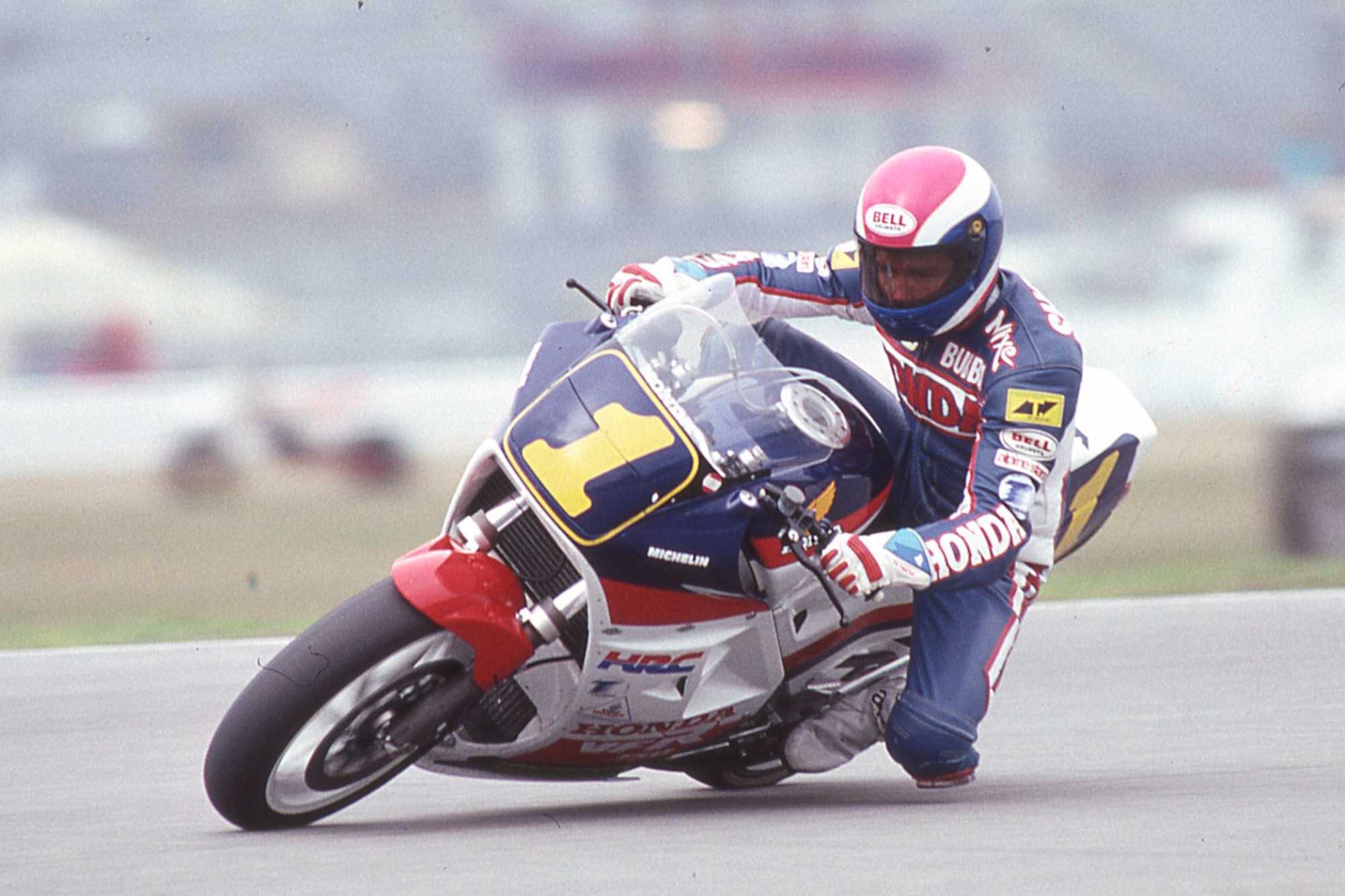 “I was a member of Team Honda for a long time,” said Shobert, who was inducted into the AMA Motorcycle Hall of Fame in 1998. “Our factory teams in dirt track and road racing had a lot of success over the years. Coming back to Mid-Ohio for AMA Vintage Motorcycle Days, featuring Honda, will be a thrill for me — seeing a lot of old friends and fans and also all those vintage Hondas.”

In addition to “those vintage Hondas,” including original and restored CB750s and CBXs, two bikes in particular will be on hand to thrill race fans: Shobert’s Factory Honda RS750, owned by American Honda, and his 1988 VFR750 championship-winning Superbike, owned by Superbike collector extraordinaire Brian O’Shea.

Shobert’s RS750 will be at Mid-Ohio Sports Car Course, as well as at the Friday night vintage flat track race at the Ashland County Fairgrounds. And weather-permitting, Shobert himself will ride the VFR750 around the road race course as he leads the Lap for History — a ride that fans can participate in with a small donation to the Hall of Fame.

“Having Bubba Shobert on hand at AMA Vintage Motorcycle Days, featuring Honda, to celebrate Honda Motor Co.’s amazing achievements will be one of the year’s distinguishing moments in the celebration of vintage motorcycling,” said AMA President and CEO Rob Dingman. “Shobert’s Hall of Fame career is synonymous with Honda, and his presence at AMA Vintage Motorcycle Days will make the entire weekend resonate with vintage motorcycle fans of all ages.”

In addition to the RS750, American Honda will be on hand with a variety of classic and new-bike displays, all of which will highlight the company’s significance to American motorcycling, particularly the advent in 1969 of the legendary 750 Four. Expect CB750-oriented clubs, restorers and fans to help highlight possibly the most important production motorcycle in history.

AMA Vintage Motorcycle Days, featuring Honda, welcomes riders and racers of all brands to Mid-Ohio Sports Car Course for the annual event. All activity at the event will financially support the American Motorcycle Heritage Foundation, the 501(c)(3) that raises money for the AMA Motorcycle Hall of Fame.

The event will include vendors from all areas of motorcycling, selling gear and services for motorcycles old and new. Past vendors have included vintage and modern gear sellers, painters and pinstripers, parts and tools dealers, community garages and much more.

There will be a drawing for a vintage raffle bike that raises additional funds for the AMA Motorcycle Hall of Fame. In 2019, the winning ticket will be drawn for a 1951 Harley-Davidson Panhead.

Motorcycling experts will speak on numerous topics, including motorcycle restoration and travel. Speakers often include AMA Motorcycle Hall of Famers — true legends of the sport.

The AMA Motorcycle Hall of Fame Bike Show recognizes exceptional examples of motorcycles from all eras and countries of origin. Bike owners are encouraged to bring out their best original and restored machines for fans to appreciate.

Much more takes place at AMA Vintage Motorcycle Days for photos, video and articles from past events, see www.amavintagemotorcycledays.com.