FoxSports1 To Increase MotoGP Coverage In The U.S.

FoxSports1 To Increase MotoGP Coverage In The U.S. 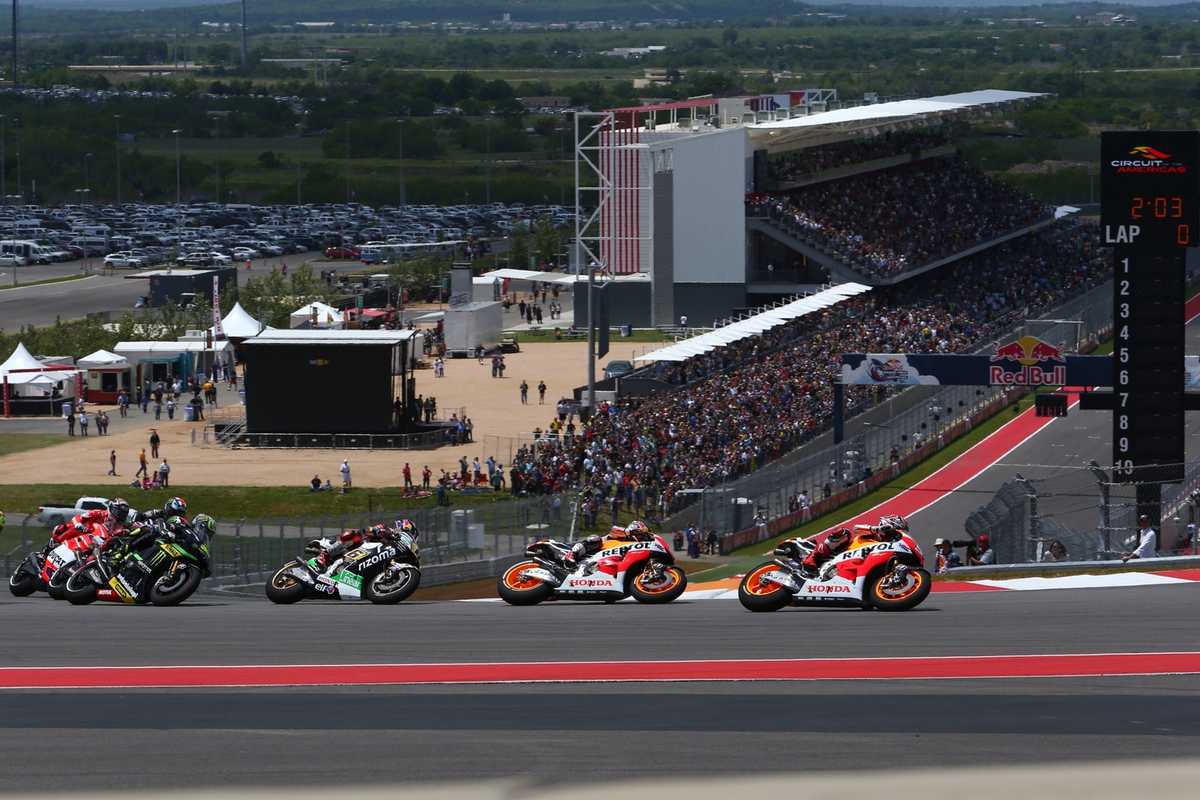 As the leathers are buffed and riders ready themselves to saddle up for a second time this year in Austin, Texas, at the fantastic Circuit of the Americas, Dorna Sports is pleased to announce that the much anticipated MotoGP™ season has increased its worldwide TV coverage once more, with a total of 83 networks broadcasting the two-wheeled spectacle.

Several agreements with new broadcasters for the 2014 season will bring new audiences to MotoGP™, including viewers across many platforms simultaneously, including TV, OTT Internet and Mobile devices.

In the UK, new broadcaster BT Sport will be showing extensive live coverage of the championship over all platforms throughout each Grand Prix weekend, with an in-depth review programme on Tuesday evenings following each Grand Prix. BT Sports’ coverage will be hosted on site, as well as from its state of the art studios in London with an exciting presenter line up bringing together experts from the motorcycle world and well known TV personalities.

ITV4 will also be broadcasting an hour long programme dedicated to MotoGP at 20.00 local time on the Monday after each GP, which means that British fans this season will have access to more coverage of the World Championship than ever before, including highlights on free to air television.

In Italy this year, another new broadcaster, Sky Italia, launches a dedicated MotoGP channel that will air everything live from Thursday through to Sunday evening, whilst continuing to offer MotoGP during the following week with highlights, re-runs and archive footage. In parallel, the free to air channel Cielo, will cover the full championship and will air eight rounds live with a two-hour highlight show on the same-day-delayed basis for the other 10 Grand Prix.

Spain sees a similar model to Italy this year with Movistar TV joining the fray as it transmits, on its newly launched, dedicated MotoGP channel, the 18 Grand Prix from Thursday through Sunday night, with the channel set to become 24/7 from June. Terrestrial channel Tele5 of Mediaset Spain will continue to cover the championship and to have a presence in the paddock, as it airs nine races live, with the remaining ones aired the same day with a 3 hour delay.

Australian viewers will see Fox Sports Australia return to MotoGP in the 2014 season, together with Ten Network in a deal that combines pay and free TV. Fox Sports will air all practices, qualifying and races live, while free to air broadcaster Channel One will also show each MotoGP race live. For their home race in Phillip Island, both channels will show special coverage produced on-site.

Also new for 2014, City TV in Colombia will follow its local hero Yonny Hernandez and air the MotoGP race from each round, whilst on the other side of the globe, the Chong Qing Satellite Channel in China will broadcast all MotoGP Races live or on a same day delayed basis for the first time, expanding the reach of MotoGP into new areas of China. Kazakhstan’s MotoGP fans also have something to cheer about, as all races will be shown for the first time on free to air network STV, as will fans in Iceland who will be able to watch each MotoGP race live on Sport 2 this season.

Ongoing agreements in key territories see MotoGP continue to be broadcast to faithful viewers with new innovations and extended coverage planned for this season.

In the USA, FOX Sports 1 will be increasing its coverage this season with a live two-hour programme from each Grand Prix, including features, highlights and live coverage of the MotoGP race, with Moto2™ and Moto3™ broadcast on a delayed basis. MotoGP Qualifying Practice will be streamed live via the FOX Sports GO platform. Viewers will benefit from extended coverage from the two US rounds with customized onsite production from these events.

For Canadian audiences, MotoGP will still be available on Speed Channel and a highlights programme will be broadcast on French speaking network RDS.

In Europe, Sport1 in Germany continues to deliver a mix of free to air and pay TV coverage to German viewers whilst Eurosport this season adds multiscreen coverage via the Eurosport Player platform for audiences in France. Agreements also continue with Nelonen in Finland, RTBF in Belgium, Fanda TV in the Czech Republic, OTE Sport in Greece, Polsat in Poland, POP TV in Slovenia, TSI in Switzerland, Viasat in Scandinavia and the Baltics, Sportklub in the Balkans, SPORT TV in Portugal, SmartSpor in Turkey, Autoplus in Russia and Sport 5 in Israel.

In other territories, pan regional coverage continues during 2014 on ESPN in Latin America, beIN Sports in the Middle East, Supersport in Africa and Fox Sports in Asia. This is complemented by free-to-air coverage in several territories such as NTV and G+ in Japan, Trans TV in Indonesia, Hang Maes in Cambodia and Meridiano in Venezuela.

Viewers in New Zealand see Sommet Sports become the home of MotoGP for the next three years, with complementary highlights coverage again available on free to air channel TV3 the weekend following each Grand Prix. Austrian fans will benefit from a renewed agreement for highlights of all GPs on the free to air sports channel ORF+, with the opening MotoGP race of the season and several others broadcast live.

In addition to all the new and renewed agreements, many broadcasters are now offering additional coverage to their audiences via a MotoGP second screen application on web or mobile devices, bringing never seen before live camera angles and data to allow viewers to follow the World Championship in a new and exciting way. Broadcasters in several territories including France, Spain, Italy, the UK and Finland will be offering this to their audiences from the 2014 season onwards.

This year also sees a shift in production culture, with many broadcasters choosing to work with Dorna’s onsite production facilities and play out live programming from each circuit, in order to offer their audiences more personalised programming and a real behind the scenes view of MotoGP.