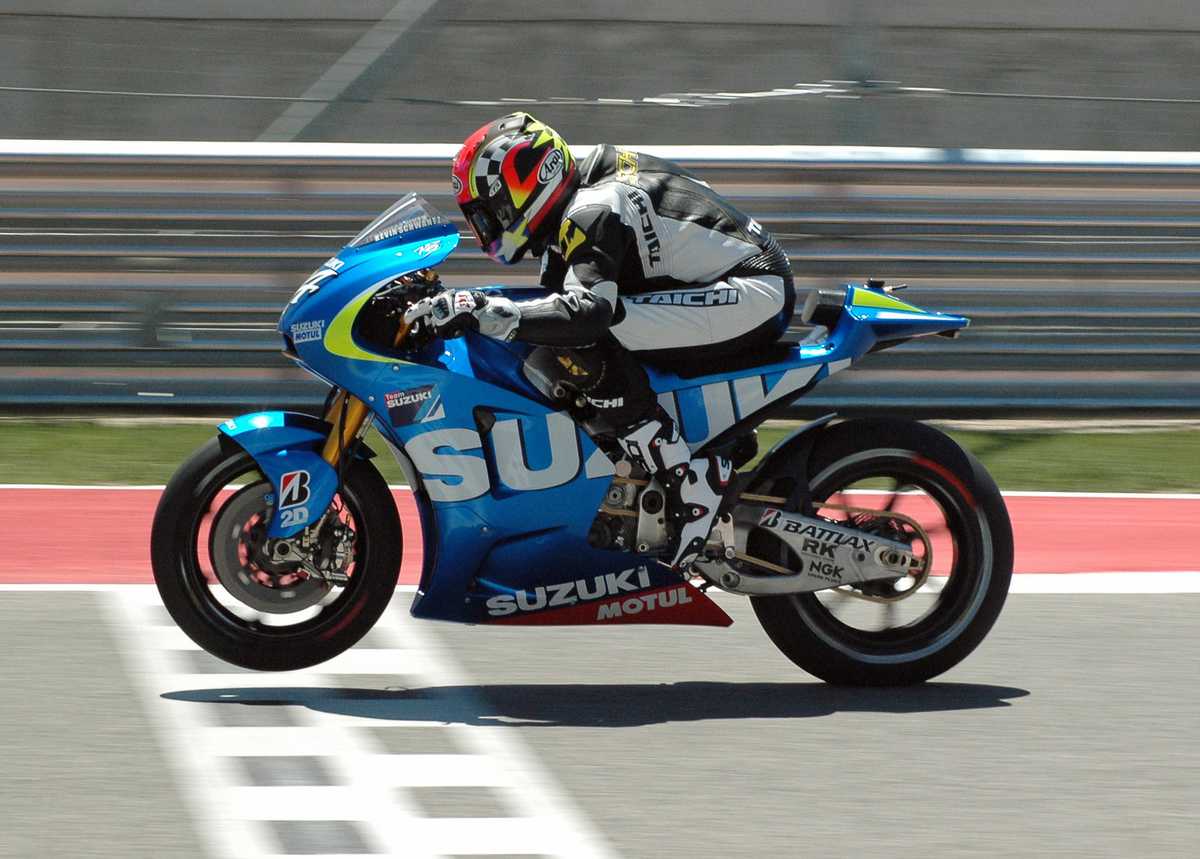 After his two-stint, 11-lap outing on the MotoGP machine, Schwantz was asked about the experience, and he said, “I was going down the back straightaway and hold on! This is fifth gear, 240, 250 kph. You can’t wheelie here. Am I sitting up?”

Schwantz found the yet-to-be-named Suzuki MotoGP prototype was far from an unmanageable beast, however, after he got comfortable.

“You’re riding around on these [Bridgestone] tires that you don’t really know a whole lot about,” Schwantz told Roadracingworld.com. “I was trying to get them to go edge to edge, get a feel, get back in the gas and feel what they do. And you’re like, ‘They’re not doing anything!’ The only thing I ever got it to do was initially off of slow corners just a little slight move in the back. Everything after that, nothing. I think the electronics on it are just that good, because I can hear it making funny sounds.”

Other than a dislike for the bend of the handlebars, which are setup for Suzuki test rider Randy De Puniet, Schwantz had nothing negative to say about the MotoGP machine.

“The only thing I could make it do wrong was put it in the wrong spot on the racetrack or try to go through a corner too fast and run wide,” said Schwantz. “As long as you have the ability to squeeze the brake lever and hang off the inside of the bike it’s going to go there. The setup on that bike, maximum lean angle, rolling around the corner, just feels like it’s planted. And again it’s amazing how well the electronics work on that bike.”

Schwantz’s best lap time on the MotoGP machine was a 2:12.7, over four seconds faster than he did all morning on the 2013-spec Yoshimura Suzuki GSX-R1000 Superbike he started the day on. And that performance left Schwantz’s second-guessing his plan to test ride the MotoGP bike again on Wednesday.

“Why do I want to ride that some more when I know that’s [Superbike] what I’ve got to go race,” Schwantz said. “It’s just going to piss me off when I get back over here [to ride the Superbike].”

Schwantz is primarily at COTA to test a Yoshimura Suzuki Superbike in preparation for the Suzuka 8 Hours FIM Endurance World Championship race in July, he told Roadracingworld.com Monday.

Yoshimura Suzuki’s American Superbike team was also testing at COTA Tuesday with riders Martin Cardenas, Chris Clark and Roger Hayden testing their GSX-R1000 racebikes. Clark and Hayden joined Schwantz during one of his stints, and Hayden did his best lap time of the day, to that point, a 2:12.4, while chasing and passing Schwantz.

Suzuki Motor of America, Inc., working in coordination with Suzuki Motor Company of Japan and the Suzuki MotoGP test team, hosted journalists and their top GSX-R sportbike dealers at the Red Bull Grand Prix of The Americas and Tuesday’s test.