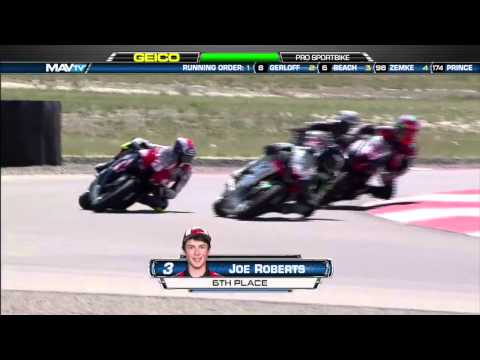 Round Three of the 2014 GEICO Motorcycle Superbike Shootout Presented by Yamaha, the Arai Mountain Nationals, was held May 24-25 at Miller Motorsports Park, in Tooele, Utah. This is the broadcast video coverage of Dynojet Pro Sportbike race three, which aired on MAVTV.

The three-round televised series was set up by race team owner John Ulrich and racer Chris Ulrich, to fill an 11-week gap in the 2014 AMA Pro Racing schedule, which initially consisted of five rounds without any TV coverage, with no rounds west of the Mississippi River (the AMA Series later picked up a sixth round, at Laguna Seca, again without TV). Each Superbike Shootout round included one Superbike and one Sportbike race (along with dedicated practice and qualifying sessions for each class) dropped into an existing club race weekend run by WERA at Auto Club Speedway in Fontana, California; AFM at Sonoma Raceway in Sonoma, California; and USBA at what was then known as Miller Motorsports Park in Tooele, Utah.

Teams and riders needed TV coverage to maintain sponsorship, and getting that coverage was a major goal of the series. The father/son duo started a new business unit, Team Hammer Promotions, hired Greg White’s production company to produce six one-hour TV shows, covering the Superbike and Sportbike races from each round, with White and Jason Pridmore commentating and Laurette Nicholl handling pit reporting. John and Chris Ulrich met with the president of MAVTV and reached an agreement for the network to broadcast each show, one per week, on consecutive Thursday nights, and to then repeat the series. After seeing the shows, MAVTV decided to broadcast each show an additional four times, totaling 36 hours of TV coverage for the series. Chris’ sister Natalie Ulrich was recruited to sell series and event sponsorship as well as TV commercials.

By all accounts, the series and the shows were a success, and played a part in keeping professional road racing alive in the United States. There were plans to run a 10-round Superbike Shootout Series in 2015. But when MotoAmerica was founded, bought the AMA Pro Racing series, and announced it would take over running the AMA series starting in 2015, John and Chris Ulrich decided to support MotoAmerica and go back to concentrating on running the family’s race team, known as Team Hammer, Inc. The rest is history…

By Michael Gougis Round Three of the 2014 GEICO Motorcycle Superbike Shootout Presented by Yam...
Read more

By Michael Gougis Round Two of the 2014 GEICO Motorcycle Superbike Shootout Presented by Yamah...
Read more

By Michael Gougis Round Two of the 2014 GEICO Motorcycle Superbike Shootout Presented by Yamah...
Read more

By Michael Gougis Round One of the 2014 GEICO Motorcycle Superbike Shootout Presented by Yamah...
Read more

If one looks at an aerial photo or a...
Read more
Feature

MotoAmerica: Support Classes Are Ripe For The Picking

MotoAmerica: Superbike Field Of 22 Primed For Action At Road America