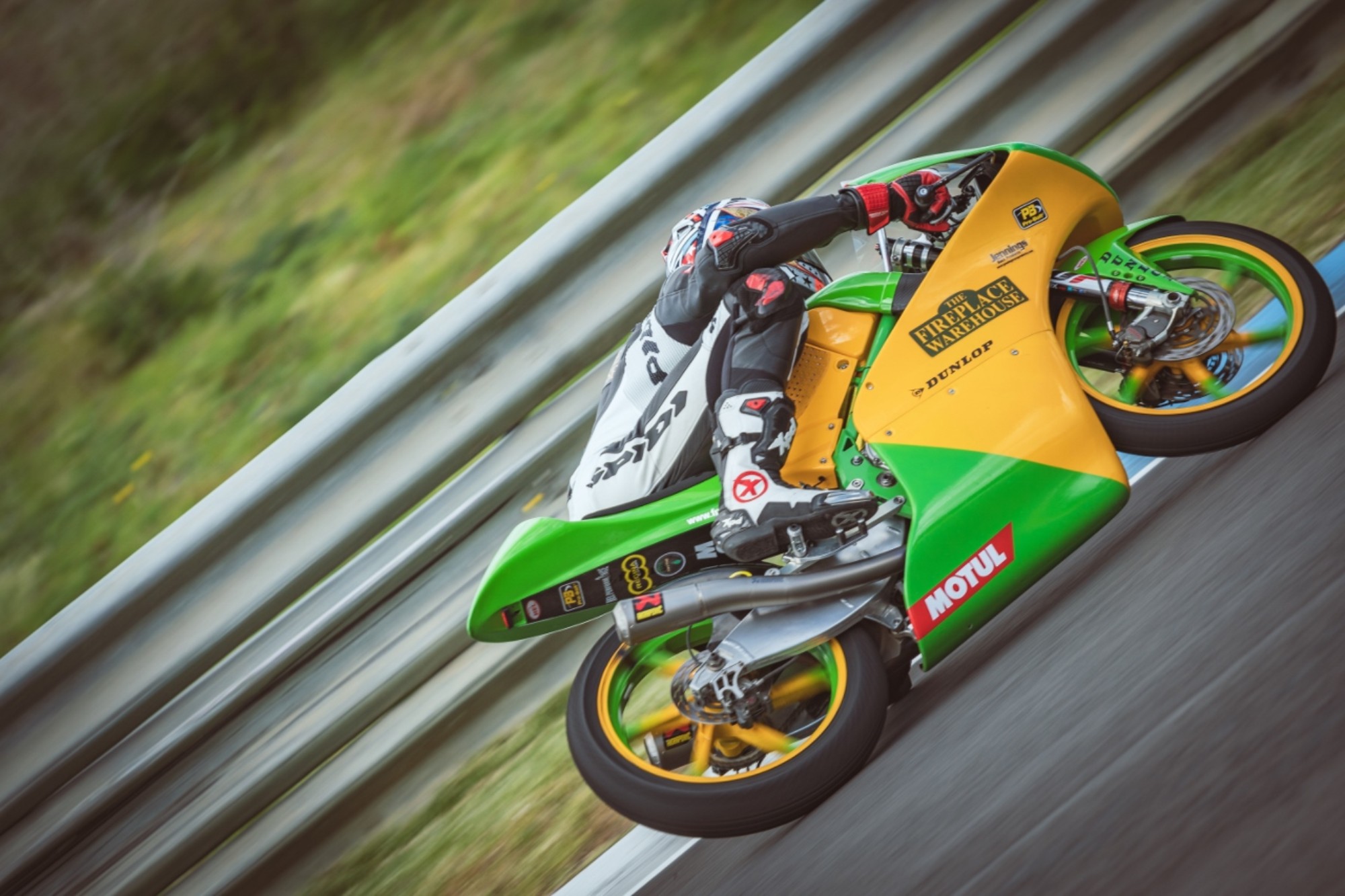 The weather at Circuito de Estoril played havoc with practice, qualifying and racing for Brandon Paasch and FPW Racing at the opening round of the FIM CEV Repsol Moto3 Junior World Championship this past weekend. The changing track conditions meant that Brandon didn’t get the qualifying position he wanted, but the race turned out to be both a highlight and lowlight for him and the team.

Having received their 2018 KTM Moto3 race bike just a few weeks prior to the race weekend, FPW Racing worked hard to strip, rebuild and paint the bike in preparation for testing and a race shakedown at Circuito de Estoril. Brandon and the team tested at Jerez and Cartagena to establish a baseline setup, before packing up the bike and heading down to Estoril. Once there, the they encountered varying weather conditions that challenged them for the whole weekend.

With a heavy downpour soaking the track before the first qualifying session, Brandon went out on a full wet setup with a goal to set a time in the Top 20. Traffic and track conditions prevented the team from hitting the mark, but it only made them more determined for the next qualifying session. The second qualifying session saw the team start from a full wet setup and move to a full dry setup by the end of qualifying, with Brandon consistently improving his lap times. Unfortunately, a damp spot on his fastest lap saw Brandon slip off the racing line and run off the track, resulting in a starting spot outside the Top 20. Again, the team was determined to improve in warm up and in the race on Sunday.

After a few tweaks to settings, Brandon was able to improve his lap times significantly on Sunday. Starting 25th for the race, Brandon aggressively moved up to 16th position within the first half of the race. His lap times matched the six riders in front of him, and he was prepared to catch and pass them. Unluckily, the throttle sensor failed and began sending erratic signals that caused the KTM to cut out at various spots on the track. Brandon was forced to retire from the race due to this dangerous issue, and the team was crestfallen that they couldn’t have Brandon be the first US rider to score points in the FIM CEV Repsol Moto3 Junior World Championship.

“Man, that was a crazy weekend! When we got to Estoril, the team and I were pumped to get out on the track. I used the first practice session to learn the layout and tail some of the locals to identify the fast lines. Then it all went a bit sideways with the weather, and the track conditions were constantly changing from practice to qualifying to the race.

“It was an up and down weekend and not the result we wanted, but I guess that’s racing. I had a lot of challenges with the weather, but every time I went out, we learned a lot about the bike. We were actually able to work on wet, semi-wet, and dry setups – all in one weekend! The competition in FIM CEV Repsol Moto3 is world class, so that was a great way to benchmark our team. As tough as it was to retire during the race, I didn’t want to drop the bike and wreck everything we had worked so hard on the past couple weeks. A huge thanks to Adrian, Greg, Dave Andy, Joe and everyone with the FPW Racing team for getting the bike ready and putting in a lot of time changing settings with this weather. I’m really getting more and more comfortable on the KTM Moto3 race bike – that thing has a ton of power and really handles well. I feel like the more time we get on it, for sure we’ll be running at the front soon. I can’t wait to get back to the UK and rip it! Thanks to my personal sponsors that made it possible to race at Estoril – Electronic Concepts, luxeStar VIP, Spidi, and Arai, and Impact Safe-T Armor.” (Brandon Paasch)

“We were really excited to get to Estoril and see the results of all the sweat we put in the past few weeks getting our KTM Moto3 race bike ready. I know Brandon had put in a ton of training this winter, and we wanted to have everything ready to go. But I guess you really can have four seasons of weather in one day! That was probably one of the most challenging weekends we’ve ever faced in all our years of racing. Our baseline settings from testing were great, and despite the changing weather, we were able to keep improving. Qualifying results weren’t what we wanted, and the team was gutted when the throttle sensor forced Brandon out of the race. But in the end, we’re proud of our lap times during the race, showing that Brandon had the pace to run near the top of the class.

“We’ll pack up and head back to England to prepare for our first race in the 2019 HEL Performance Motostar British Championship, and I’m really looking forward to showing the rest of the grid that we’re here to run at the front all season long. Thanks to our team sponsors that help us be the best we can be – Dunlop, Motul, Pro-Bolt, HEL Performance, Regina Chains, and Jennings Performance Products.” (Adrian Mason)

The 2019 HEL Performance Motostar British Championship kicks off May 4 at Oulton Park. Brandon and FPW Racing will contest the highly competitive Moto3 series on a 2018 KTM Moto3 race bike. All the latest news and updates can be found at www.britishsuperbike.com.

FPW Racing is an amalgamation of the Fireplace Warehouse and several like-minded bike enthusiasts to support one common goal – to establish young riders and to give them a leg up in their racing careers. For more information, visit us at www.fpwracing.co.uk