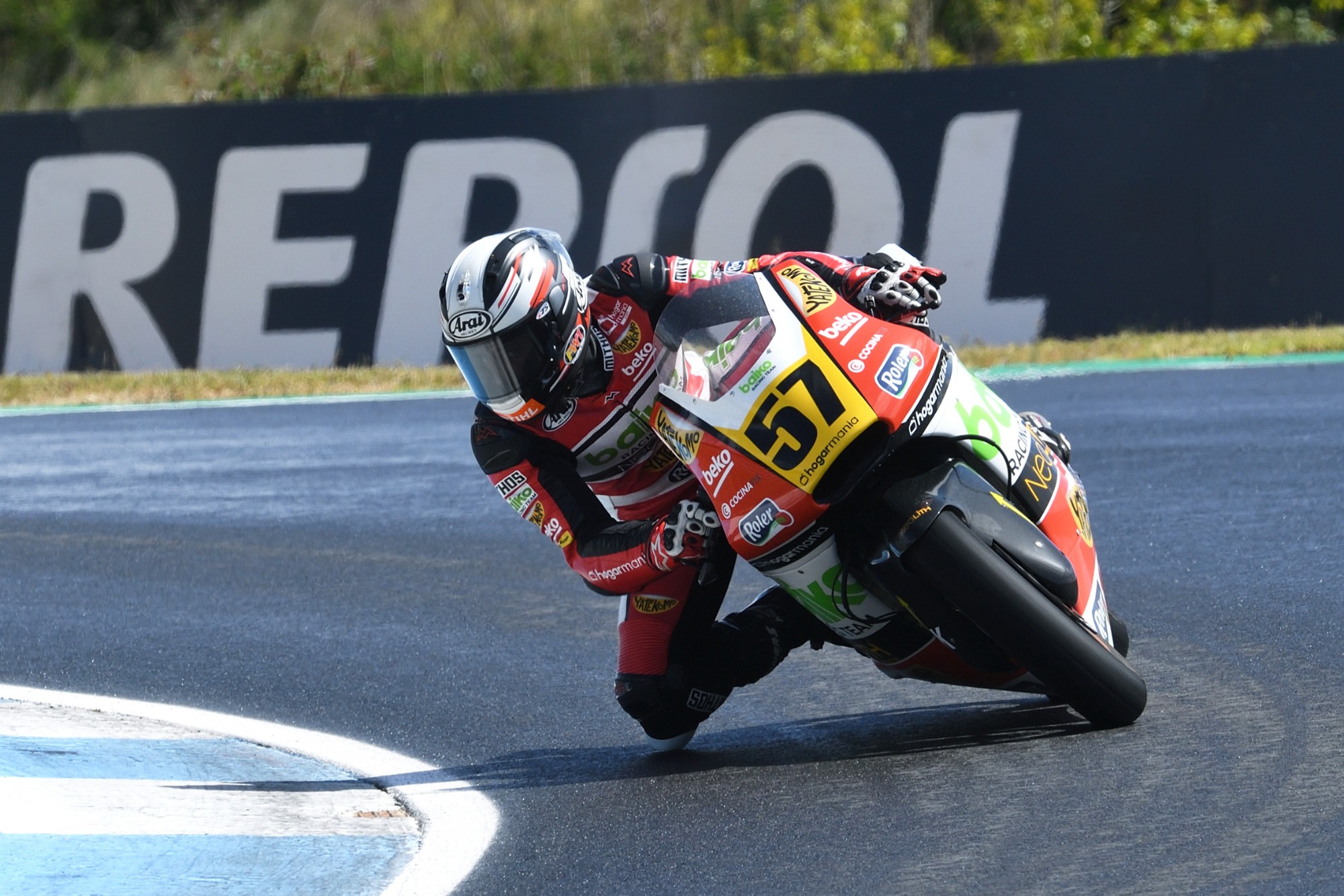 Editorial Note: American Brandon Paasch was 25th in FIM/CEV Moto3 Junior World Champion qualifying with a lap time of 1:50.735 on his FPW Racing KTM. Spaniard Jeremy Alcoba got the pole position with a time of 1:47.214 on his Laglisse Academy Husqvarna.

First poles of the season decided

Once again the Estoril Circuit is hosting the start of a new FIM CEV Repsol season, where changing weather conditions today affected and even briefly halted the qualifying sessions due to a hailstorm. Even so, the competition program went ahead, with Jeremy Alcoba (Laglisse Academy) achieving pole position in Moto3™, Edgar Pons (Baiko Racing Team) in Moto2™ and José Antonio Rueda (Talent Team Estrella Galicia 0.0) in the European Talent Cup.

Jeremy Alcoba underlined his claim for the Moto3™ Junior World Championship title by taking the first pole of the season with a time of 1: 47.214. The Laglisse Academy rider beat Deniz Öncü (Red Bull KTM Ajo) by just 0.058 in the second qualifying session with Carlos Tatay (Foundation Andreas Pérez 77) closing out the first line of the grid.

In Moto2™ Edgard Pons showed the other riders a clean pair of heels with a time of 1: 54.440 in Q2, 1.294 seconds ahead of his immediate pursuer Niki Rikhard Tuuli. The Finnish Team Stylobike rider in turn held off Kasma Daniel Bin Kasmayudin (Dynavolt Intact SIC Junior Team) by just 0.020. Gerry Salim (Astra Honda Racing Team) finished with the fourth best time of the day ahead of Tommaso Marcon (Team Ciatti), while Héctor Garzó (CNS Motorsport), another contender for the Moto2™ title, only managed sixth.

With 60 ETC riders having signed up for the whole season, there were two groups in the ETC classifying sessions; José Antonio Rueda was the fastest in Group A with a time of 1:49.931 posted in the second session. Izan Guevara (Cuna de Campeones) was second, 0.404 behind Rueda and Iván Ortolá (Sama Global Angel Nieto Team) third, trailing the poleman by 0.868. In Group B, Roberto García (Fau55 El Señor de las Bolsas) achieved the best time of 1: 50.202 followed by Fenton Harrison Seabright (Wilsons) and Diogo Moreira (Talent Team Estrella Galicia 0.0).

José Antonio Rueda will head the ETC starting grid thanks to posting the best time overall. Roberto García, the quickest rider in Group B should have taken second place on the grid: however, he was penalized for being below the allowed weight, thus leaving the second slot to Fenton Harrison Seabright; in third place will be Izan Guevara as the second placed rider in Group A; in fourth, the second placed rider in Group B, Diogo Moreira, and so on. One of the innovations of this season is the ETC Series 2 race, for riders who fail to classify for the official ETC race. The ETC Series 2 race will close the race program on Sunday at 4:00 pm.

The race schedule for next Sunday is as follows:

The entrance to grandstands A, B and E of the circuit will be free over the weekend but a paddock entry will be required for access and on Sunday to take part in the Pit Lane Walk. The meeting point will be at the control tower at 10:15.

Television networks and new media platforms in Europe and many countries are interested in live broadcasts or on demand videos of FIM CEV Repsol events. New in Spain, DAZN will include the Moto3™ Junior World Championship, Moto2™ European Championship and European Talent Cup in its programming, showing each of the scheduled races – as will BT Sports in both in the United Kingdom and Ireland, with live broadcasts of all races in each category. Also new is that Canal Plus in France will broadcast all the races live on Canal+ Sport. In Italy, Sky will broadcast live the Moto3™ Junior World Championship and the Moto2™ European Championship races.

In Belgium, GP Inside will offer live broadcasts of all the Championship races. Through Eurosportplayer (Holland and Romania) Eurosport will also offer live coverage of the Moto3™ Junior World Championship, Moto2™ European Championship and European Talent Cup. In Portugal, Sport TV consolidates its commitment to motorcycling with live or recorded broadcasts of all the races scheduled throughout the season. Hungarian fans will be able to follow the young hopefuls of the European Talent Cup thanks to the recorded broadcast of ETC races by the Spiler TV channel.

In addition, in those countries without television coverage, all races will be broadcast live on the championship’s YouTube channel.

All the results and information about the Championship are on the official website: www.fimcevrepsol.com