eMotoRacing Announces 10-Round Season For 2017 (Updated)

eMotoRacing Announces 10-Round Season For 2017 (Updated) 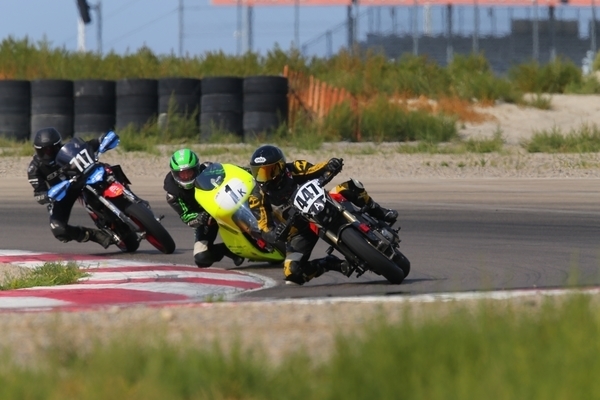 eMotoRacing ramps up for its 4th Season

This marks the 4th full season of events, which are sanctioned by the American Historic Motorcycle Racing Association (AHRMA) at major tracks in every region of the country.

Such tracks as Road America, Sonoma, Utah Motorsports Campus, NOLA, NJMP, and Willow Springs will again be the site of innovation and intense racing, with low environmental impact.

The season kicks off with 2 rounds of racing at Roebling Road Raceway near Savannah, GA. Practice will take place on Friday February 24, with the weekend points events on February 25 and 26.

There are currently three mass-produced electric motorcycle manufacturers worldwide. Two of them are located in the US, and one in China.

Many of the eBikes seen on the eMotoRacing grids are modified production units from Zero and Brammo (recently acquired by the Polaris motorcycle company).

Pete Nicolosi of South Carolina will defend his 2016 championship title, won on a 2013 Brammo Empulse R.

A strong, late season push by the Zero-mounted team from Hollywood Electrics in CA sends a message that 2017 will be very competitive.

Several other bikes in the series are prototypes, mostly built by racing teams from North American universities. Throughout the season, these teams may compete with the private racers in various eMotoRacing events, as they prepare for their day in the sun.

On July 14-16 at New Jersey Motorsports Park, the 7th round of the 2017 eMotoRacing series will feature the ‘Varsity Challenge’, where the student teams from North America will vie for a winner take all scholarship. This award is sponsored again this year by the well-respected road racing gear purveyor Woodcraft Technologies. Many thanks go to Eric Wood.